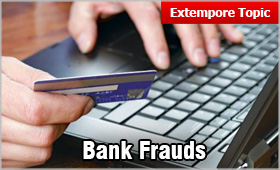 Below is the solved Extempore speech topic. Going through it will enable you to get an idea how and what you should speak with a balanced approach.

GD Topic: Banking Frauds: Result is Rising NPAs; Better to Prevent now than to run after

Banking Frauds – Prevention is the only Remedy
Bank frauds swallow all the economic development and cause financial indiscipline in the country. Big defaulters like Vijay Mallya, Nirav Modi, Mehul Choksi usurp thousands of crores which not only add to sharp increase in the quantum of Non-Performing Assets (NPAs) but siphon off sizable funds that could have otherwise been used for economic well being of thousands of poors willing to become entrepreneurs with banks’ help and plan to start up their small businesses.

Prevention of Bank Frauds if the only Cure