MBAUniverse.com News Desk | :
February 17, 2017
CAP 2017 for 9 IIMs and final selection round in 7 older top IIMs as well as the PI round in top B-schools like SPJIMR, MDI, IMI, IMT among others put the candidates to WAT on varying topics in different forms 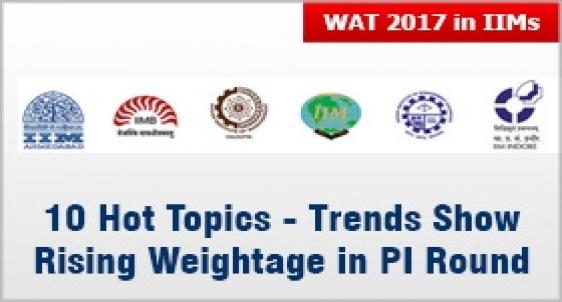 You could be asked to write on any topic in WAT like - Business, Economics & Finance, Social, Political, religious, national or international affairs, Sports related, imaginative and abstract

Common Admission Process (CAP) 2017 for 9 IIMs and final selection round in 7 older top IIMs as well as the PI round in top B-schools like FMS Delhi, SPJIMR, MDI, IMI, IMT among others put the candidates to Writing Ability Test (WAT) on varying topics and in different forms assigning a time limit between 20 to 30 minutes to complete the test. WAT in the final admission round in IIMs and other B-schools play an important role in converting the call finally.

IIMs and other top B-schools have now started giving more focus on WAT instead of GD round. The Group Discussion (GD) is being gradually substituted by WAT in most of the top rated B schools like IIMs mainly because CAT is not able to assess a candidate for his good writing skill in this computer based exam.

In fact a candidate is very well tested on his knowledge in MCQ or Non-MCQ type questions in examination and can also be assessed well how good he speaks and can convince others in the personal interview round but without WAT it may not be possible to judge him on his writing skill. Written Ability Test in IIMs and other important B schools is a 20 to 30 minutes’ exercise.

Written Ability Test is not a part of CAT computer based test and therefore IIM Ahmedabad; IIM Bangalore; IIM Lucknow; IIM Calcutta and other IIMs as well as non IIMs individually put the candidate to take WAT in a time duration of 15 to 30 minutes. The expectation in WAT is whether the candidate has understood the topic in accordance with its key words and is able to form the piece of writing in a logical and coherent manner. It accounts for 10 to 20 percentage points in final admission round. Candidates may expect questions in their Personal Interview round out of their written essay of 300 to 400 words.

Hot WAT topics
You could be asked to write on any topic in WAT like – Business, Economics & Finance, Social, Political, religious, national or international affairs, Sports related, imaginative and abstract.

A few important solved topics are shared below for WAT 2017

Make in India
The debate on the success of Make in India campaign attracted not only the economists, bureaucrats and politicians to weigh its pros and cons, but the top B-schools in India have also been fascinated with the project. IIMs and other top B-schools have included ‘Make in India’ as one of the hot topics in their Written Ability or Writing Skill Test

Climate Change Summit
One of the hot debatable global issues that called for debate and action plan to reduce global warming and how to reduce the climate changes around the world in near future has emerged as one of the most relevant topics on environment. Since IIMs and all other top B-schools would be conducting Written Ability Test (WAT)

Smart City Project
Smart City Project in India is one of the current hot topics and in all probability one or other session on WAT in IIMs may ask the shortlisted candidates to write on this topic. Following is the model essay which can be attempted by a candidate in a time period of 20 minutes in the WAT exercise at one or other IIM or top rated B school

Demonetization 2016 of India
Despite facing lot of problems post demonetization, people appreciated the move as its objective was to curb the black money, stop the use of counterfeit currency, bring more economic development avenues by reining in the black money through banking channels.  The long term benefits of demonetization are more than perceived while the check on the terrorist activities and huge turn-out of money into banking channels prove that the move is a right decision.

WAT Topics in past
Topics in WAT are mostly based on current affairs, socio political happenings, business and economics, International affairs, philosophy. Following past WAT topics that appeared in IIMS and other top rated B schools will provide a glimpse of the recent trends in PI round

Other WAT topics in IIMs

1.  How can we make youth politically more active
2.  New innovative courses like MBA in Disaster Mgmt are coming up-what are the advantages       of  these courses for a graduate?;
3.  Explain the popularity of reality TV shows and television game shows;
4.  Food security act is because of inefficiency of public distribution system ;
5.  Is reading no more a leisure thing? How has the advancement of technology affected the     concept of leisure?;
6.  Is privatisation in education sector an only solution to improve the quality of higher  education in India ?;
7.  Rise in the number of terrorist activities;
8.  Are there any other reasons than Tourism why the historical places should be preserved  and protected? ;
9. The recent financial crisis highlights the perils of Capitalism
10.Women's Reservation Bill
11. Banning politicians with criminal records from contesting elections is against their right
12. India versus Bharat : a divided nation
13.Union Budget is a useless exercise and activities like recession puts it off-track
14.Essential services like water, electricity should not be privatized
15.Is disinvestment in profit making PSU's advisable?
16.Should Petroleum Subsidy go away?
17.Corporate Social Responsibility
19.Discuss the role of Public Private Partnership in India's Economic Growth
20.Voting should be made compulsory
22.IIM should make one year of social service compulsory for all students
23.Should there be reservation for women in MBA colleges?
24.Bollywood is capitalizing on people with disabilities
25.In India mass mobilization can only be achieved through religion
26.IPL is a death knell to Indian cricket
27.Legalizing doping in sports in modern times
28.Cricket is cannibalizing the space of other sports in India
29.The greatest tennis star of all time
28. Vishwanathan Anand is as good a brand ambassador as Sachin Tendulkar
29. Pink is the new Blue
30. Idiots Rule
31. Sometimes wars are required to ensure peace
32. An eye for eye will make the whole world blind
33. World is run by conspiracy. People run by lofty ideas
34. Effects of corruption; In today’s world, business and ethics don’t go hand in hand
35. Foreign coaches are a waste of money in Indian sports.
36. Advertising is legalized lying

Time limit for WAT exercise
This is the most crucial part in WAT. You have to write a good essay with rich contents in a short time. Every B school has prescribed its own time limit in a range of 15 to 30 minutes. Some of the IIMs make this time limit comprehensive i.e. the time is for WAT followed by discussion round on the same topic for example IIM Kozhikode. Let us know the varying time limits

How to score high in WAT: Expert tips
Final admission depends on WAT and PI round to a great extent. According to Prof S K Agarwal, Verbal Ability Expert and Mentor on CAT preparation, if an essay is written with a clear and coherent flow of thought with rich contents, it may get the candidate through the last round of admission procedure. The score and the thought expressed in essay then serve as a ground to the selection in B schools listed in CAT. The crucial role, this essay writing plays, is the candidate’s ability to face the Board and answer the penetrating questions based on whatever was expressed in the essay.

Stay tuned to MBAUniverse.com for more updates on WAT 2017