CAT 2017: How to begin and plan 150 days preparation strategy

MBAUniverse.com News Desk | :
June 30, 2017
CAT 2017 may be a different experience in a changed pattern and IIM Lucknow may bring more changes this year as during the last 2 years CAT has followed the same pattern although it has a reputation of consistent changes. Your next 5 months should be devoted to hard core preparation if you want to get into IIM Ahmedabad, Bangalore or Calcutta 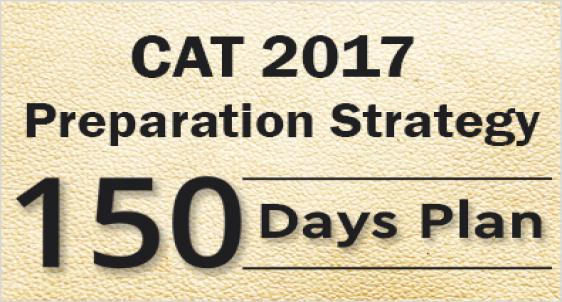 As a CAT 2017 aspirant, if you are not aware what all the preparation stuff is about and how to begin with it, you may not begin well

IIM Lucknow has geared up with the activities to convene a successful CAT 2017, probably with more changes in modified pattern sometime in the month of November/December 2017 to select suitable candidates to various PGP 2018-20 programmes in 20 IIMs and other top rated B-schools. CAT 2017 notification is proposed to be released in the last week of July 2017 and the registration process might begin in the first week of August 2017.

Common Admission Test (CAT) 2017, gateway to IIMs and other top B schools to pursue MBA programme 2018-20 is a mandatory test without which you may not think of getting admission in one of the 20 IIMs, FMS, MDI, NITIE and other top rated B schools.

CAT 2017: A different test
CAT has gone with perceptible changes and in the year 2014 and 2015, the exam has taken a new shape with more time, more number of questions, different types of questions in MCQ and Non-MCQ format and changed pattern of questions as well.

Till 2014, CAT had only Multiple Choice Questions (MCQs) and all of them imposed penalty of negative marking for wrong answers. For the first time in CAT 2015 convened by IIM Ahmedabad, entire process was changed and out of 100 total questions, the exam included 28 non-MCQs which remained free from any penalty of negative marking. Apart from this, the exam was divided into 3 sections instead of earlier 2. The move was much appreciated since it was considered more aspirant friendly. The test offered level playing field and high scoring opportunities to the candidates from all streams. This helped to increase academic and gender diversity in IIM class rooms.

CAT 2016 convened by IIM Bangalore followed the same pattern as set by IIM Ahmedabad in 2015. CAT has the reputation of consistent evolution and changes. It is expected that CAT 2017 may again have a different face.

Accordingly this is the right time to begin your journey to success in CAT 2017.

CAT 2017 to be convened by IIM Lucknow, may also bring a different structure and content but the basics to be learned for the exam would not change.

The preparation for CAT in earlier years was not an easy process but with the changed pattern and surprise elements appearing year after year, CAT 2017 aspirants anticipating yet more changes find it difficult where to begin from, what to study and how to study. While the nature of exam drives the aspirants crazy as they have no fixed syllabus to study and hence all the topics appear very important to them, the difficulty level in CAT 2017 is another big issue to crack the test with high score.

CAT no doubt has a vast syllabus and now with questions increased from 60 to 100, the test paper has widened its spectrum further. The pressing thought and dilemma can be cleared if the aspirant has a lucid picture before him in regard to the factors that would guide the beginning of his journey.

It is not difficult to walk, the difficult job is to find out the way on which you will walk. Let us have a well organized understanding of CAT 2017 from Prof S K Agarwal Expert on Verbal Ability and mentor on CAT 2017 preparation and the shared strategy from him to begin the preparation for the same.

Your first step: Organized beginning
CAT 2017 no doubt has a vast syllabus, it is like a big banyan tree with multiple branches, and every branch has got its due importance. One thing is however, clear you have to go up the trunk to reach those branches else will remain unfamiliar with it.

Assess your strengths & weaknesses
If you are an engineering graduate, graduate in Physics or Mathematics, you may have strong aptitude to solve questions based on Quantitative Ability. Students of Arts & Literature – as a general presumption- may have better skill in spoken and written standard English language. If you are a commerce graduate or graduate with statistics, you may have good command on Data interpretation, Logical reasoning.

Now looking at the syllabus and past pattern of CAT examination, there may be weak areas in your strong holds where you will have to study and practice more, and on the other hand there may be a few topics in your weak areas where you are stronger enough and you may need less revision and practice sessions for them.  Strategically, you must find out the weak areas and segregate them from the strong ones.

Understand with example
For example, an aspirant, who is an engineering graduate and is a working professional, is both strong and weak at Verbal Ability. With the help of his mentor in Verbal Ability and after analysing some past year model tests, he finds that he is very good in cracking questions based on jumbled paragraphs, but very weak when it comes to sentence error corrections, and the questions based on the Reading comprehension passages as he can’t follow the phrasal, idiomatic expressions in the passage and can’t understand the vocabulary of the same as well.

Now if you want to crack CAT-2017 for sure-you have the option of beginning with any section you like and work hard on it to get expertise in the same. Another option is to take some expert guidance –how to proceed. A good preparation centre/mentor will definitely like to find out the root cause of weakness in this case.

In case the aspirant has weak fundamentals, he may not be able to solve the jumbled paragraphs without certain short-cuts, instincts, elimination method. At the same time despite having the ability to connect the sentences logically, he will be required to begin with the strengthening of his fundamentals-and the path is supposed to be from- Grammar-Times zones understanding-Vocabulary contextual use-correct usage-to rigorous understanding and practice of Reading Comprehension passages.

Study material: Choose a right mix
Once it is decided what are the weaknesses and where to begin from, since all the topics are equally important and nothing can be left to chance, the right study material whether it is the self-study or mentor supported study, has to be judiciously picked up. An aspirant whether working or non-working, in the present scenario, is more tech savy and can study on-line instead of carrying the stuff with him all the time.

Going through the topics and determining their relevant importance is very important factor leading your preparation strategy forward. Even if you have the study material – on-line or in hard copy form, it will be helpful only when you are able to utilize it to the optimum extent. There are certain topics that appear of no importance but omission of the same may reduce your percentile to a great extent.  For example – usage in punctuation, articles may not appear important and may not also interest the aspirant but CAT has been fond of framing questions in Verbal Ability section on them and a simple omission of comma may cause a loss of 4 marks, reducing your percentile by ten or so.

Besides, how deeply you have followed the concept cannot be determined by you.  This can be judged by the person who knows the intricacies of the topic. It is always a good idea to begin with the expert guidance and continue clarifying your doubts consistently and not compromising with the self study.

Prepare RC with editorial in news paper
The importance of newspapers and periodicals is also very prominent in CAT. Although almost all the newspapers are available on-line, it is the experience that the e-book, on-line reading of the editorial part and other articles in a newspaper are not retained for a long time as you do not visit the same newspaper again nor you try to underline the interesting but unfamiliar words, phrases, clauses in the same.

While e-book may continue getting updated regularly, a new news-paper will appear the next day and you will lose interest in the old one.  As it is the human nature, you will switch over to the new. Hence it is suggested that you must develop a habit of going through the hard copy of the same. It may be kept in your small beg, laptop bag or you can carry it in your hand, you should carry a pen/pencil with you to underline the interesting but unfamiliar parts of the sentences. This habit will help and improve your reading skills many fold.

Get down to self study before taking Mocks
Since there are hardly 5 months left to prepare for CAT 2017, it is very important that you should begin your journey with concerted efforts and making sure every topic is covered. At a later time when you begin taking mocks for CAT 2017, it will be difficult to begin working deeply on new and confusing topics.

CAT 2017 needs hardcore in- depth  preparation, where nothing can be left to chance. It is a computer based examination unlike paper pencil one. The success in CAT 2017 will award you with the opportunity to enter top B-schools like IIMs/FMS/MDI/SPJIMR/IITs among others. The great learning experience and fat remuneration that you receive after completion of your MBA is much more than offered by any other programme.

Stay tuned to MBAUniverse.com for more updates on CAT 2017