CAT 2017: 5 big changes in CAT over last 7 years; what to expect from IIM Lucknow in CAT this year

MBAUniverse.com News Desk | :
July 8, 2017
CAT 2017 is no exception to the perceptible changes that have taken place in CAT conducted by IIMs in last 7 years. The CAT exam structure and exam content is reviewed on yearly basis to ensure that CAT caters to the need of IIMs like diversity improvement in their class rooms 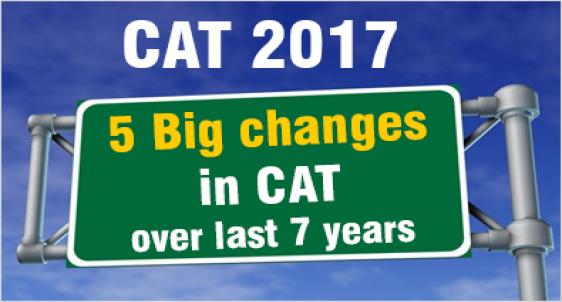 It is expected that IIM Lucknow which is convening CAT 2017 will again bring about more changes in the exam structure and content.

Reasons behind changes in CAT
The CAT exam structure and exam content is reviewed on yearly basis. It is also ensured by IIMs that CAT questions, their contents, type of questions are not repeated in the next year. This is the basic reason due to which CAT has no specific and defined syllabus. The topics on which questions are asked in one year may go missing in next year and after a few years such questions may come up again.

Responding to the query in regard to changes in CAT exam pattern and content, Professor Tathagata Bandyopadhyay CAT 2015 exam convener, Admission chair and faculty at IIM Ahmedabad shared with MBAUniverse.com “Every year we review CAT and make certain changes- both operational and content.”

Sharing about why every year CAT is reviewed and changed, Prof Bandyopadhyay was very clear on the objective of doing so and said “one of our concerns is, score in Quant dominates the percentile rank in CAT. As a consequence it brings in skewness to the selection process towards a particular set of candidates from a particular background. This year we intend to address it by making some changes in the test content and also by rationalizing weights assigned to different components of the test. This we hope will create a level-playing field for all candidates, no matter what educational background they come from, and will remove skewness to a large extent that we referred to above.”

Accordingly each year CAT exam would be different in one or other way from the earlier one. So the CAT 2017 aspirants should be prepared again to face more changes in the CAT 2017 exam pattern – both in structure and contents. IIMs are now targeting for increase of non-engineers and women students in their class rooms and with this objective before them, the CAT exam is changed every year.

6 IIMs conducted 8 CAT exams since 2009
CAT used to be a paper pen based test till 2008. Since 2009, the exam has gone green and opted to become a computer based test. Beginning with IIM Ahmedabad as the convener for the first computer based CAT in 2009, the IIM Lucknow convened CAT 2010 followed by IIM Calcutta convening CAT 2011 and IIM Kozhikode convening CAT 2012.  It was only IIM Indore who convened CAT for 2 consecutive years and the responsibility to convene CAT in 2015 was again assigned to IIM Ahmedabad. IIM Bangalore convened CAT exam for the first time in 2016. Now IIM Lucknow has been assigned the responsibility to conduct CAT 2017 after 7 years since the exam was computerised.

Most Changes by 2nd time CAT convening IIMs
One of the key facts on record is that the IIMs who have convened CAT 2nd time have brought about more changes and totally revamped the CAT exam structure and content, although every time the changes in CAT have the objectives to improve academic and gender diversity in IIM class rooms. Whenever such changes indicate some difficulty for the CAT aspirants, IIMs notify changes in the admission policy to achieve these objectives as done by IIM Ahmedabad, Bangalore, Calcutta, Lucknow, Kozhikode, Indore for admission to academic session 2017-18.

IIM Lucknow, the convener of CAT 2017 is one of the 3 IIMs who have been twice assigned the responsibility to convene Common Admission Test (CAT) since it was computerized in 2009. Apart from IIM Lucknow, IIM Ahmedabad and IIM Indore have convened CAT twice since 2009.

IIM Ahmedabad was the first to convene the 1st computerized CAT 2009 and again convened CAT 2015; IIM Indore convened CAT for two consecutive years in 2013 and 2014 and now it is the turn of IIM Lucknow who convened CAT 2010 and has again been given the responsibility to convene CAT 2017.

Surprisingly, IIM Indore and IIM Ahmedabad modified and revamped CAT structure and pattern when they conducted it second time only. Now it is the turn of IIM Lucknow which is convening CAT for the second time after 7 years. Going by the historical data, you should expect more changes in CAT 2017.

Big changes in CAT in 7 years
Prior to switching to the computerised format Common Admission Test (CAT) used to have a very large number of questions, shortest testing window, short time limit but after getting computerised CAT has not restricted itself either to continue with the same pattern structure or content apart from the testing window and test duration, number of sections and questions.

CAT 2009 and 2010: Exam pattern, Testing window
The 1st and 2nd computerised CAT exams had 3 sections on Quant, DILR and VARC with total 60 questions equally divided with 20 questions for each section.

Apart from other type of questions, Grammar and vocabulary based questions in Verbal Ability and Reading comprehension (VARC) section played a major role in scoring high in this section. VARC, after 2010 had to bear the brunt of the most of the changes in CAT exam pattern.

CAT aspirants were a little relaxed since they had to individually qualify in two sections instead of three.  Another benefit they got was that they could compensate the tricky DI or LR questions by attempting more Quant or Verbal questions or vice-versa depending upon their skills. Those who had strong Quant or DI could get through the QADI section. Similarly an aspirant with strong Verbal or LR could get the same benefit.

Last 3 Years: CAT totally revamped
In last 3 years CAT has taken absolutely different shape as the testing partner of CAT exam was also changed in CAT 2014 from Prometric to TCS. This change has also prompted IIMs to change the CAT exam pattern, testing window, number of questions, number of sections, scoring pattern, type of questions among others.

IIM Indore: Modified CAT 2014
IIM Indore that convened CAT 2013 and CAT 2014 brought about many changes in the Common Admission test when it convened it for second time in 2014. Major changes that were introduced in CAT 2014 as against CAT 2013 can be summarized below:

The top rated IIM Ahmedabad was again assigned the responsibility to convene CAT 2015 after 6 years under the convenership of Prof Tathagata Bandyopadhyay, faculty and admission chair at IIM Ahmedabad. This year CAT was totally revamped in the structure as well as in contents and carried the exam to the next level that was not anticipated earlier. Even IIM Indore even after making so many changes when it convened CAT second time, lagged behind in number of changes brought about by IIM Ahmedabad.

Major changes brought about by IIM Ahmedabad in CAT

CAT 2016: Scoring pattern changed
IIM Bangalore conducted CAT 2016 for the 1st time. The exam was marked with paper leakage at one of the centres although CAT 2016 convener Prof Rajendra K Bandi, faculty and admission chair at IIM Bangalore addressed the issue timely and it did not harm the prospects of the test takers.

IIM Bangalore changed the scoring pattern and reduced the number of questions without negative marking penalty in the exam. Number of questions in each of the 3 sections remained the same with same time limit.

CAT 2017: Expect a different exam by IIM Lucknow
Moving on the path of changes in structure and contents in CAT exam, last 3 years have seen more and more changes in every CAT exam. IIM Lucknow is convening CAT 2017 after CAT 2010. Going by the trends, it is expected that CAT 2017 might be a different experience for the test takers.

CAT 2017 aspirants can anticipate following friendly changes in the exam pattern this year from IIM Lucknow:

MBAUniverse.com anticipates that Prof Neeraj Dwivedi, Convener CAT 2017 and faculty at IIM Lucknow would bring about more changes in the exam structure and pattern on the lines of CAT 2015 and CAT 2016.