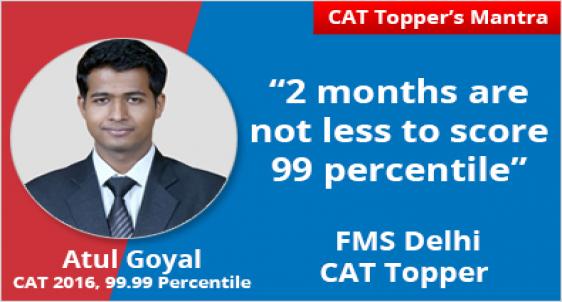 “Prepare sincerely and even 2 months are not less to score 99 percentile, just be sincere and devote some time every day to your CAT preparation” FMS student & CAT topper Atul Goyal

An inspiration to CAT 2017 aspirants, Atul Goyal CAT topper with 99.99 percentile and student of MBA 2017-29 batch at FMS Delhi advises the MBA aspirants to study effectively even if they study less. This way even 2 months are sufficient to score 99 percentile provided you are sincere enough.

Faculty of Management Studies (FMS) of Delhi University is the dream B-school for CAT toppers who prefer the campus to IIMs and other top B-schools due to the various USPs of this highly ranked B-school which has a legacy of more than 60 years. FMS Delhi is the highest RoI B-school with very low fee structure and high placements.

Atul Goyal, one of the CAT toppers in 2016 scored 99.99 percentile in CAT and 99.627 percentile in XAT. Atul preferred to join FMS Delhi. He feels good on joining FMS Delhi instead of other top B-schools as he finds that FMS Delhi is one of the best MBA institutes in India and has large alumni base.

Atul comes from a modest family of Barnala. His father is Government servant and mother is a house maker. Atul scored 9.4 CGPA in class 10, 89.8% marks in class 12 and 8.01 CGPA in graduation. Atul has 10 months of work experience at Analytics quotient as Business analyst.

Apart from devoting time to study, Atul has great interest in Playing cricket and football, Solving puzzles, Sketching among others.

For the benefit of CAT 2017 aspirants, MBAUniverse.com has brought a round of CAT toppers’ success stories alongwith their success mantra that led them to crack CAT with high percentile. In the series we present the success story and CAT 2017 preparation tips shared by Atul Goyal, student of MBA 2017-19 batch at FMS Delhi and CAT topper.

MBAUniverse.com:What was your preparation strategy for CAT 2016?
Atul Goyal (CAT topper): My overall preparation strategy was to studying less but effectively. I used to spend very less time on doing questions but understanding the basics and the concepts. If I am stuck at some question, I will study the concept first then re-do the question. This helped me in not making the mistakes again.

MBAUniverse.com: How did you prepare for each section in CAT exam – VARC, DILR & QA? What study materials and books did you use?
Atul Goyal (CAT topper): For VARC, I used to read a lot. It does not matter what you read. You can read newspapers, novels or some books. It is one of the best ways to get comfortable in VARC.

For DILR, doing one question per day is enough. You just need to do different types of problems every day. For Quant, understanding the basics is the most important part. Your concepts should be very clear.

I used the study material given to me by my institute IMS. I did not use any other book as books do not matter but how you study does matter.

MBAUniverse.com: Was there any particular CAT exam section that you were weak at? How did you overcome this challenge?
Atul Goyal (CAT topper): I was weak in VARC and I started reading more to overcome the weakness. Communicating in English and watching English shows also helped. Eventually you just need to be comfortable in English. Doing one passage per day is good enough to get hold of comprehension passages.

MBAUniverse.com: How can candidates use Mock tests better in CAT 2017 exam? What is your advice?
Atul Goyal (CAT topper): What I have witnessed is that students give mock tests and then forget about it. This is not the right way. They should go back home and analyze their mistakes first, study the concepts they forgot and re do the wrong questions. This is one way to reduce your chances of making the same mistake again.

MBAUniverse.com: Other than CAT, which exam did you appear?
Atul Goyal (CAT topper):  I appeared for XAT also and scored 99.627 percentile.

MBAUniverse.com:  Which institutes did you apply for admission?
Atul Goyal (CAT topper): I applied for FMS, Old IIMs and XLRI.

MBAUniverse.com:  Please share your strategy for the CAT Day. What was your last-minute preparation? How did you plan your CAT test taking?
Atul Goyal (CAT topper): My last minute strategy was to skim through all the concepts and then give rest to my mind. You should only focus on writing the exam rather than thinking about any college or clearing GD/PI’s. Stress is the last thing you want during the test.

MBAUniverse.com: Please share your GD/WAT topics & PI questions at different institutes and the ones who offered you admission?
Atul Goyal (CAT topper): Most of my GD/WAT topics were current trends like Demonetization and GST. My PI questions included questions like introduction, why MBA, why do you want to shift from engineering to MBA, your hobbies and interests, questions related to them and some technical questions related to Engineering. Most of the questions are based on what you say in your introduction.

MBAUniverse.com:  Which B-school you decided upon and why?
Atul Goyal (CAT topper:  I decided to join FMS as it is one of the best institutes in India and it has a very large Alma connect. The main focus here is on growth of the students.

MBAUniverse.com:  Any message you would like to share with the candidates preparing for CAT 2017.
Atul Goyal (CAT topper): Prepare sincerely and even 2 months are not less to score 99 percentile, just be sincere and devote some time every day to your CAT preparation.