MBAUniverse.com News Desk | :
December 1, 2017
MBA admission 2018-20 at Faculty of Management Studies (FMS), Delhi University, Delhi will be a different experience for the CAT 2017 toppers with 98 and above percentile as they may not find a place in shortlist despite scoring high in the exam 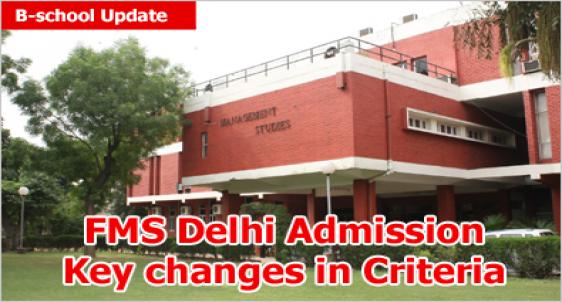 MBA admission 2018-20 at Faculty of Management Studies (FMS), Delhi University, Delhi will be a different experience for the CAT 2017 toppers with 98 and above percentile as they may not find a place in shortlist despite scoring high in the exam as the high RoI FMS Delhi has announced major changes in its MBA 2018-20 admission criteria.

Key highlights of FMS Admission 2018 criteria
FMS Delhi admission procedure which was on uniform process for the last few years has been substantially changed for the MBA 2018-20 admission criteria. Announcing the overhaul in its admission criteria for full time MBA 2018-20 batch, FMS Delhi says “From the shortlisted candidates, admission to MBA programme shall be based on Extempore Speech, Group Discussion, Personal Interview, Class X & Class XII marks and CAT 2017 scores as provided by CAT centre.”

Important changes in FMS admission 2018 are:

FMS Delhi Admission 2018: Weightage in final merit
Following are the weightage components to arrive at the final merit list at FMS Delhi

How the changes in FMS Admission criteria will impact candidates

According to FMS Delhi, “To encourage diversity of Gender and Academic Disciplines, for the purpose of shortlisting candidates for Interview Process different weightages shall be assigned to the scores of different sections of the CAT 2017. A composite score shall be computed giving weightages of 30%, 30%, and 40% to the scores of QA, DI/LR and VRC sections respectively as provided by the CAT Centre for the CAT 2017 Examination for candidates who apply to FMS”

With a view to increase the number of Non-Engineers in its class room, FMS Delhi has overhauled its admission policy and has decided to award weightage to sectional scores in CAT 2017. Earlier FMS Delhi used to shortlist the candidates at the first stage on the basis of overall CAT percentile only.

With the changed shortlisting criteria on the basis of CAT 2017 score, FMS Delhi has announced that it will award 10% higher weightage to VARC sectional scores. It implies that in the process to admit more non-engineers, better performing candidates in VARC section will get preference. So, even if 2 candidates score high equal percentile in CAT 2017 but have deviation in their sectional scores, the one with higher percentile in VARC will be preferred to the other with lower percentile score in VARC section.

The visible difference will place the 99 percentiler in CAT 2017 below the 97 percentile during the shortlisting process at FMS Delhi Admission 2018. This fact will be visible after declaration of CAT 2017 result when number of 99 percentilers will lag behind and the candidates who score lower percentile in CAT 2017 with higher score in VARC section will get shortlisted for PI round.

FMS Final Admission 2018: 3 main components
After the 1st stage shorting and awarding due weight to academics and gender diversity, FMS Delhi admission 2018 process will focus on 3 major components in final selection. These components are Group Discussion (Reintroduced after 3 years of abeyance); Extempore speech and Personal Interview.

The importance of these three components in FMS Admission 2018 can be summarized as under:

The extempore speech is the test of speaking skill. Clarity of thought and logical and coherent speech relevant to the topic is the key to score full marks in extempore. Whether you grasp the core of the topic and can speak without beating about the bush reaffirms your future managerial ability as a team leader

To score maximum in extempore the candidate has to organize the thoughts before speaking and should not go wayward as it will give the impression that you are trying to befool the panelists by passing the time only.

On an average the interview round of a candidate consumes around 12 to 20 minutes with 2-3 panelists taking the interview. The PI will have the highest weightage in the final admission round after CAT 2017 scores.

Dates for FMS GD/PI round
FMS Delhi after finalizing the shortlist of candidates would declare it in the month of February 2018. The next stage of admission round at FMS is proposed to begin in the month of March/April 2018.

The average placement in 2017 has gone upto Rs.20.6 lakhs per annum. More than 2000 candidates are shortlisted by FMS Delhi for final admission while the ratio of applications goes beyond 1:100. Many candidates despite getting admission offers from IIMs, prefer FMS Delhi due to its various USPs like high RoI.

FMS Delhi will accept only CAT 2017 score in MBA admission 2018. So only those candidates who have applied to FMS Delhi and have taken CAT 2017 are eligible for admission to FMS MBA 2018-20.