MBAUniverse.com News Desk | :
August 25, 2018
IIM Ahmedabad student of PGP 2018-20 batch, Krupa Bathia scored 99.95 percentile in CAT despite the fact she was a working professional and had to keep a balance between work and CAT preparation. She used Mocks to decide her preparation strategy 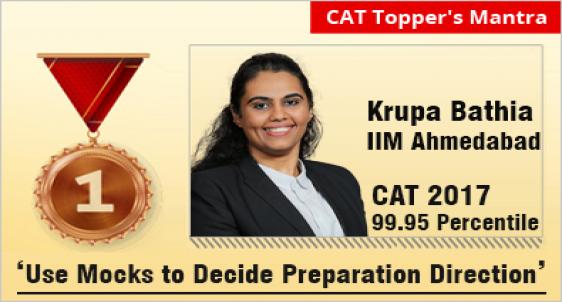 “Mocks were extremely crucial for my success as I used them to decide the direction that my preparation should take” Krupa Bathia CAT topper with 99.95 percentile and IIM Ahmedabad student

An inspiration to CAT 2018 aspirants, IIM Ahmedabad student of PGP 2018-20, Krupa Bathia scored 99.95 percentile in CAT 2017 despite the fact she was a working professional and had to keep a balance between work and CAT preparation. Apart from CAT exam, she did not appear in any other MBA entrance test.

Krupa scored 98.43 percentile in VARC section, 99.80 percentile in DILR section and 99.77 percentile in Quant section.  Krupa had converted call to IIM Ahmedabad, Bangalore and Calcutta. She, however finally decided in favour of IIM Ahmedabad. Krupa Bathia is from Jamnagar and is the only child to her parents.

After completing her B.E in Electronic and Communication from Dharamsinh Desai University, she worked for 3 years with Nokia Siemens and then did M.Tech in Microelectronics from IIT Bombay. She has worked as a Research Engineer at Conduent Labs (Erstwhile Xerox Research Center) for two years after completion of her M.Tech at IIT Bombay.

Alongwith the self preparation for CAT exam,  Krupa also joined CAT coaching to save time and improve the pace of CAT preparation. She made it a point to attempt as many mocks before the CAT exam as possible. More importantly, Krupa analysed each and every mock and developed her own logic to solve the problems. She used the Mocks to decide her CAT preparation direction.

Krupa advises CAT 2018 aspirants to continuously assess their strong and weak areas and improve on their weak areas thoroughly.

MBAUniverse.com has brought a round of CAT toppers’ success stories for the benefit of CAT 2018 aspirants. In the series we present the success story of confident Krupa Bathia who not only scored 99.95 percentile in CAT 2017 but also converted her admission call to IIM Ahmedabad.

Sharing with MBAUniverse.com, Krupa highlights her experience in preparation journey to CAT and modestly attempts to give the ‘success mantra’ to the CAT 2018 aspirants

MBAUniverse.com: What was your overall preparation strategy for CAT?

Krupa (CAT topper): I had enrolled in coaching, but I had taken weekday classes, so that I get weekends free to do self-study. The classes were from 7-9 am, after which I solved the questions for the topic that was taught that day for 1.5 hours. Weekends were for test taking and self-assessments. I took a mock every weekend and to prepare for that, I analyzed the previous mock, cleared the concepts were I had made mistakes and took sectional tests for those topics.

MBAUniverse.com: What was your preparation strategy for VARC in CAT?

Krupa (CAT topper): I have had a reading habit since quite some years now. So, I did not prepare much for this. The major learning came from the analysis of mock tests. From that I realized that I was weak in parajumbles and I solved a lot of questions for parajumbles and odd man out.

MBAUniverse.com: What was your preparation strategy for DILR in CAT?

Krupa (CAT topper): To ace in DILR, more than the number of sets, it is important to do variety of sets. So, I took all easy, medium and difficult sectional tests of the T.I.M.E test series and I also solved most of the questions of the DILR book of T.I.M.E

MBAUniverse.com: What was your preparation strategy for Quant in CAT?

MBAUniverse.com: Was there any particular section that you were weak at? How did you overcome this challenge?

Krupa (CAT topper): I had a problem with leaving questions unsolved in quant. This would result in me spending more time on a particular question and hence my number of attempts in mocks used to be around 15. I then applied the strategy of going through the paper multiple times. At first go, I will solve all the questions that can be solved in around 30 secs. If any question took more time, I would leave that and come back and finish it. This ensured that I didn’t lose out on easy questions. Then I did round two and attempted all the questions that I knew and would take less than a min and then finally try to attempt the remaining ones.

MBAUniverse.com: What role did Mocks play in your success?

Krupa (CAT topper):   Mocks were extremely crucial for my success as I used them to decide the direction that my preparation should take. I attempted around 24 mocks.

MBAUniverse.com: Did you self-prepare or attend a coaching centre and why?

Krupa (CAT topper): I attended a coaching center, because I thought it will make my preparation more systematic and also because the teachers there would be able to guide me better after seeing the mistakes I made.

MBAUniverse.com: Please share your strategy for the CAT Day.

Krupa (CAT topper): Sleep before 4-5 CAT day is of utmost importance. I slept well for 3-4 days before the CAT exam. I also took mocks during the time of actual CAT till 2 days before CAT. A day before CAT I did not take any mock, I just went through my notes of concept and slept properly. For test taking I followed the strategy that I had followed during Mocks.

MBAUniverse.com:  Your final message and tips for candidates preparing for CAT 2018.

Krupa (CAT topper): Continuous assessment of strong and weak areas and improving on the weak areas must be done thoroughly.

MBAUniverse.com: Did you face any weak moment when you self-doubted your preparation and scared failure? Please narrate it, if so.

Krupa (CAT topper):  During mocks, the number of quant questions that I was able to attempt was very low and that was a big worry factor for me. Less accuracy is a lesser problem than being stuck at one question and not attempting itself. I had to slowly learn to move on to the next question and not get stuck at difficult questions.

MBAUniverse.com: What kind of personal struggles/challenges you had to face while preparing for these exams like facing family or peer pressure, convincing your parents, etc?

Krupa (CAT topper): Convincing my parents for an MBA after a M.Tech degree was very difficult because of the age factor and a considerably good job with a decent pay and an excellent work life balance, but because I wanted to do it so much, they finally agreed