MBAUniverse.com News Desk | :
August 16, 2011
This article analyses the trends of XAT question papers in the past five years, helping one prepare for the kind of the changes to be encountered with. 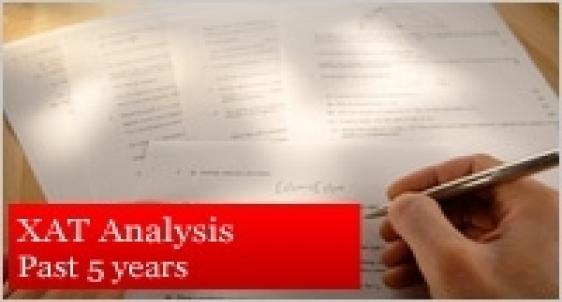 The pattern of XAT is not fixed and it throws surprises or elements of change every year. It is one of the toughest MBA entrance tests, cracking which can guarantee one's admission in premiere institutes of the country.
XAT 2013 is the latest MBA entrance examination that has been announced recently. The registration process will start from August 20, 2012. Before deciding on taking the test, one must be aware of the pattern.

The pattern of XAT is not fixed and it throws surprises or elements of change every year. It is one of the toughest MBA entrance tests, cracking which can guarantee one’s admission in premiere institutes of the country.

This article analyses the trends of XAT question papers in the past five years, helping one prepare for the kind of the changes to be encountered with.

XAT is a paper- & pencil-based test and there is no plan to change the format to a computer-based one. The duration of XAT is 2 hours and 20 minutes. The sections are data interpretation & quantitative ability, analytical reasoning & decision making and verbal & logical ability. Apart from the three sections, one has to write an essay in 20 minutes.

The following table will give you the pattern of XAT over the past five years.

Now let us have a look at the detailed section-wise analysis of XAT over the years.

The verbal & logical ability section was also of tough. It had 38 questions. There were four reading comprehension passages. The other questions were fill in the blanks and paragraph jumble which were tricky in nature. The logical reasoning caselets were relatively simple and were of ‘moderate’ difficulty level.

The data interpretation & quantitative ability section had 38 questions which were extremely tough. The DI questions involved more of thinking than calculation. The arithmetic questions covered a wide variety of areas and were difficult and time consuming.

The number of verbal & logical ability questions was 35. There were three reading comprehension passages which required careful reading. The questions on grammar were on sentence correction, figures of speech and para jumbles which were difficult in nature. The logical reasoning caselets were of moderate difficulty level.

The data interpretation & quantitative ability section had 40 questions. This was the toughest section in the paper. The DI sets were very tough. The QA questions were easier compared to DI and DS questions.

The analytical reasoning & decision making section had 30 questions. The difficulty level was very tough and the section was lengthy. The questions were on puzzles, decision making and other miscellaneous topics.

The essay writing section was presented in a different manner. There was a statement given and one had to make a judgment on it. The argument given was:

“The statesman who should attempt to direct private people in what manner they ought to employ their capitals would not only load himself with unnecessary attention but assume an authority which could safely be trusted to no council and senate and which be nowhere be so dangerous as in the hands of a man who had folly and presumption enough to fancy himself fit to exercise it.”

In this question, the candidate had to write a word analysis on the given argument in 250.

There was no progressive negative marking, which had given nightmares to past test takers. There was ¼ negative marking this time. There was differential marking system for each question which demanded candidates to look at the marks of each of the questions. Marks per question ranged from one to five.

The logical reasoning area consisted of questions from strengthen/weaken arguments and sentence-based inferences.

The data sufficiency section had 25 questions of 30 marks. Unlike previous years, analytical reasoning questions were not there. This section was quite tough.

Stay tuned to MBAUniverse.com for more on XAT 2013.