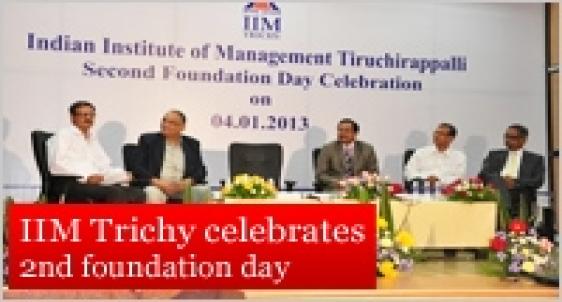 The main attraction was a panel discussion on 'Financial Sector - Growth and Prospects in 2013'
A number of interesting and innovative events marked the second foundation day celebration of IIM Trichy held on January 4 amid excitement and fanfare.

The prime attraction was a panel discussion on ‘Financial Sector – Growth and Prospects in 2013’. The panelists were Ananth Ramachandran, managing director, Standard Chartered Bank, Singapore; Ambarish Datta, CEO, BSE Training Center, Mumbai; A V Krishnan, executive director, BHEL, Trichy; and Sundaresan A S, investment director, Peepul Capital Advisors P Ltd, Chennai. Prof V Gopal, dean of academics, IIM Trichy, took up the role of convener and moderator of the panel discussion. After each of the speaker spoke for 20 minutes, Mr Gopal summarized the whole discussion. The event was followed by a Q&A session.

Mr Krishnan highlighted the rise of private sector companies in areas traditionally dominated by public sector companies. He drew parallels between the national manufacturing policy and the financial policy and spoke about achieving and sustaining the projected growth rates. He proposed flexibility to ensure that the need for sustainability of growth is met.

Mr Sundaresan analyzed the past fiscal year and spoke optimistically on 2013. He spoke about the prospect of consolidated, better quality NBFCs (non-banking financial companies) if RBI mandates a minimum asset size. He predicted that organizations which could focus and target their efforts would attract capital and leverage from the banking sector and achieve success in 2013. He also expects greater demand in the NBFC sector spurred by the interest rate cuts by the RBI. For VC and PE industry, Mr Sundaresan said 2013 would be a year of growth, consolidation and organized play.

Mr Datta described the Bombay Stock Exchange index, Sensex, as the barometer of the country's progress. Highlighting the reduction in the number of companies moving for IPOs (97 in 2012-13 compared to 120 in 2011-12) this fiscal, Mr Datta expressed optimism that 2013 will be a good year for FDI and disinvestment. He also touched upon the peculiar Indian obsession with gold which is the most illiquid asset to possess.

Mr Ramachandran said the surge in mergers and acquisitions (M&As) in the last quarter of 2012 will lead to a healthy 2013. He also spoke on the global banking scenario.

The next big event of the foundation day celebration was an eye donation pledge camp, organized by Elixir, social responsibility club of IIM Trichy, in association with Joseph Eye Hospital, Trichy. The event was inaugurated by NIT Trichy dean (students) Prof Ram Prasad and Dr Thanuja Britto, deputy director, rehabilitation centre, Joseph Eye Hospital. Many students enrolled their names for this social cause.

Stay tuned to MBAUniverse.com for more news on IIM Trichy