MBAUniverse.com News Desk | :
November 22, 2013
MBAUniverse.com starts a new expert series of GD PI WAT preparation for MBA Admission 2014. This article is on the GD Topics The rise in vegetable prices is a man made farce to help you in your GD rounds. 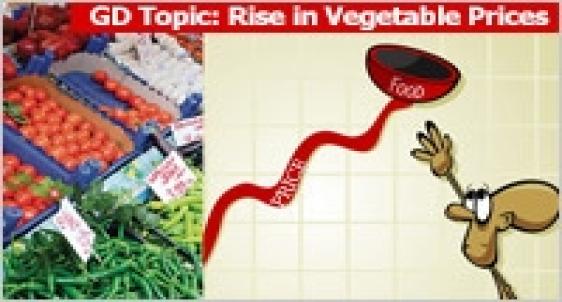 The GD/PI stage is arguably the most crucial stage of the selection process. It is like the journey from qualifying in the heats to the gold medal in a sports event. GDs are conducted to test managerial attributes like interpersonal skills, leadership, analytical and rational thinking, knowledge and personality traits.

MBAUniverse.com starts a new expert series of GD PI WAT preparation for MBA Admission 2014. This series of articles will help aspirants prepare for their GD PI WAT by providing them valid contents, probable topics and experts advice to help you succeed during admission process at various B schools.

This article is based on the GD Topics “The rise in vegetable prices is a man made farce” to help you provide inputs for your group discussion rounds.

Click here to score high marks in GD PI WAT at Top B school for Admission 2014:

Background
Steep rise in vegetable prices during last few months came as a surprise to the common man.  It could become a hot GD topic in forthcoming final selection round in B-schools. Equip yourself with key points to get through this round
Prior to June 2013 things were not so bad as they turned out in later June 2013. Prices of Vegetables like Onion, Tomato, Potato which are essential for daily food preparation soared by more than 70 percent.

Key Points
What could be the possible reasons for this steep hike in prices? What had suddenly happened to otherwise balanced demand and supply position. Even the prices of perishable vegetables shot up. What role did Himalayan Tsunami that took place in Uttarakhand play when the vegetables were grown in plain areas?

Nature had a lesser role in comparison to the role played by the greed of the hoarders that has added to the sky high vegetable prices.

The budget of a normal family that was already reeling under the inflationary pressure was further disturbed due to this price rise.

Click here to score high marks in GD PI WAT at Top B school for Admission 2014:

Arguments for the topic
Prices of any commodity cannot rise overnight unless there is some foul play. It was Onion price that shot up by more than two to three times followed by tomato, potato, and even the green vegetables which had the bandwagon effect with the rising prices of other vegetables.

How could the supplies of the already produced vegetables remain thin? Traders claimed that the farmers were not sending in the supplies. Onions were left with one fourth of its usual supply. Besides the quality of the available vegetables were also very poor. In fact it was not a demand-supply problem, as claimed by traders and administrators. On the contrary it was sheer profiteering by the hoarders.

Official sources from Government are of the view that rising population is the reason which is not acceptable since population has been rising every year and there is nothing unusual in 2013.  There was neither sudden rise in population nor in demand. Cartels of traders, hoarders in connivance with corrupt government officials must have led to this rise.

Tendencies of making quick money riding on dipped supply resulted in hoarding of vegetables.  It becomes an opportunity for the traders and hoarders to earn more without any ethical thought. This fact was proved in sudden raids on go-downs of these traders which unearthed huge stocks of vegetables.
The Government hand-wringing also adds more woes and this the fact due to which when prices settle, they settle at much higher level.

If we go back to the ‘90s we find a glaring example of fall of a government due to sudden hike in onion prices and number of newspapers in 2013 also reported and anticipated such repetition of history.

Not every problem is manmade. Nature also plays an important role. Himalayan Tsunami, heavy rains contributed to reduction in supply of various vegetables since on a humanitarian ground the help and aid in form of food, vegetables and other commodities to affected victims had to be provided.

Floods in different parts, heavy rains also are the causes for poor supply as transportation system gets severely affected. Roads, railways are cut off and it takes time to restore the services.

No popular government would ever like to play politics on supply of vegetables at high prices and that too when general elections are round the corner. Corrective measures like banning the exports and increasing the import of commodities take some time to show the result.

Rise in vegetable prices can be attributed not only to profiteering, less supply due to various reasons but also delay in taking corrective measures by the regulatory authority. It could become a learning lesson for future.