MBAUniverse.com News Desk | :
December 4, 2013
This is the fifth article in the series of GD PI WAT preparation for MBA Admission 2014. This article is on the GD Topic "Will India remain way behind China?" to help you prepare for your GD PI WAT round at rounds. 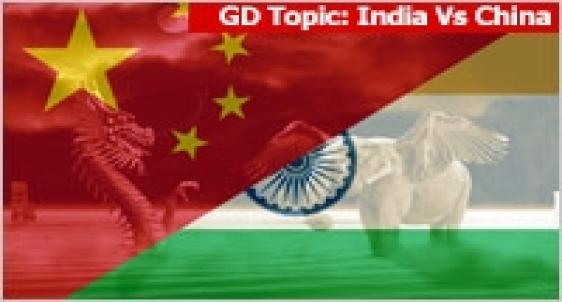 In order to match the growth of China, the Indian elephant needs wings to fly else it will remain way behind

This article is based on the GD Topic “Will India remain way behind China?” to help you provide inputs for your group discussion rounds.

Will India remain way behind China?
The report that Chinese dragon is way ahead of Indian elephant in terms of the respective future growth is not a myth since the statistics and the impact of China on Global economy can be very well observed. In order to match the growth of China, the Indian elephant needs wings to fly else it will remain way behind.
Background

India and China both reeled under the agonising rule of Monarchs and feudalist regimes and needed unification.

China never suffered any foreign rule India remained under the rule of Portuguese, Britishers and at the same time a few princely states till it got freedom and the unification process to amalgamate the princely states began.

India chose a federal polity while China has been run as a unitary polity.

Key Points
Reunification of China resulted in state controlled pure communist economy which pushed the growth at a faster pace.

India although also a socialist economy adopted the path of mixed economy having the co-existence of public and private sectors seemed to grow fast but did not match that of China.

Arguments for the topic
China began its growth march as a closed economy till Maozedong ruled China. India became a federal state which had to amalgamate the princely and other states for future growth environment.

Since 1978, when Deng came to power, China adopted the policy of ‘one child’ and has changed its mammoth population as an asset and devoted work force. India due to its structure has not been able to match China and its population is more a liability than an asset.   In the severe global slowdown and recessionary trends China’s GDP growth is 9% where as India is estimated to grow at less than 6%. China has more than 200 billionaires as compare to 70+ of India.  They spend more than $190 billion in public health, where as India spends around $65 billion.. Life expectancy is 75 year in China as against India which is around 65 only. The gap is now widening even in values of most social indicators like living standards, such as life expectancy, infant mortality rate, years of schooling, etc.

China has become more competitive than any other country during the last 15 years and since it opened up the economy, now the investors and companies wish to enter China. It has become more business and education oriented. According to the World Competitive ranking- China is at 31st position as compared to India, which is at 50th position.

Various estimates visualize that China will take over USA by 2018 as the world’s largest economy, (economic game published in the December 31st 2011 edition of the Economist).

China, after 1978 under the influence of Deng accelerated leaving India far behind. China’s income is almost double that of India. China adopted a road that India could always have adopted right after independence. Natural resources like minerals were exported from India while finished goods were imported. Precious and scarce foreign currency went on flying from India.

Since 1949, China has been devoting its resources to the all round development like internal and external security, defence mechanism – in 1962 India was a victim to strong defence forces of China to which Indian forces were no match.

China is less exposed to foreign and institutional debt while India has not been able to reduce its foreign debt substantially.

China and India both suffered a lot but India has not been able to manage its growth map in a sustained and planned manner while China has surpassed all the estimates and is ready to emerge as second to none in near future.

Arguments against the Topic
The democratic structure of Indian polity and the concept of Public Private Partnership, competition between public and private sector in healthcare, economic activities, food provisions, housing shelters etc. were aimed to give a boost to Indian economy which began to grow with enthusiasm.

With the freedom of mobility all over the country for all, skilled and professionally equipped find better employment opportunities in various upcoming industries. Establishment of industrial houses, infrastructural developments like roads, rails, water management with the help of construction of dams etc. have become the catalysts of growth in agriculture and industry alike. Natural resources in India are abundant like minerals, water resources, human resources, etc.

India has the entire socially well knit requirement for growth of a civilized society.  It is an example of unity in diversity where thousands of tribes, castes following different religions co-exist. India is an example of one of the greatest democracies in the world.

China, however, with all the abundance of natural resources began its march on growth in all the sectors initially like a closed economy for the world. It didn’t even could get the U.N. Membership with its new name. No freedom of trade and commerce, press etc. was allowed till Maozedong held the reins of power.

India despite the long foreign rule and diversity in caste, creed, language and customs have never been so hostile to foreigners as China has been.

China and India both are the victims of corruption although it is more rampant in India. But people will tolerate corruption, although with reluctance since they can throw the corrupt out of office. Democracies coexist with all sorts of imperfections and can indeed withstand a lot of misery unlike authoritarian regimes.

India unlike China embarked on the path of growth and development on the strong grounds of democratic federalism with the thrust on participation from all walks of society.

The world has great faith and trust in the vibrant growth model of democratic India, where the growth is achieved by negligible use of force. India, with a given freedom of choice to its citizens managed to control the population growth whereas China made the one child policy a compulsion.

Indian human resource, IT and other professionals are most sought after in the world. India is working hard and its major population is an asset now. Even the rag pickers’ wards are getting education in good schools (TOI dt. 12.01.2013). Such factors make India a freedom and self driven country.

India is a country that is an open economy. It pushed the import liberalization policy harder, has consistently been making efforts to strengthen the international relations.  The period of early 1990s saw the liberalizing economic policies, increase in annual growth rates, the reform process has been kept up, has maintained its territorial integrity, unlike for example Pakistan, It has not had a civil war, has survived as a democratic open society based on consensus and debate. Life is about more than per capita income and its growth.

Conclude
Unlike China, for India any hope of growing faster depends on harnessing the private sector entrepreneurial talent which has always been there but was stifled for a long time. This requires a less interventionist government but a better regulatory regime. India will remain a soft state, a consensual polity. Although it has not been able of keeping sustained growth at the sort of rates which China has attained, India is the country that has been able to provide current account convertibility to its currency whereas China has so far been afraid of doing so. To stay a stable and peaceful society, India has all the ingredients.  The elephant has capability to surpass the dragon without wings.

SNAP 2013: How to score more in Verbal Ability