MBAUniverse.com News Desk | :
December 24, 2013
This is the 10th article in the series of GD PI WAT preparation for MBA Admission 2014. This article is on the GD Topic "What India gained at the WTO DOHA Round?" to help you prepare for your GD PI WAT round at Admission 2014 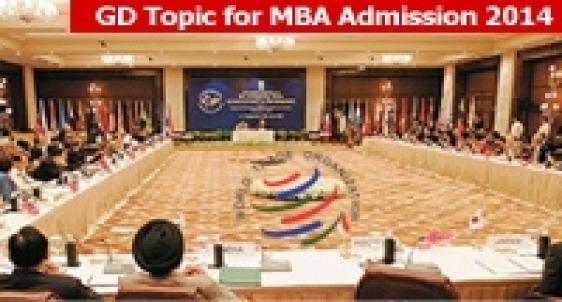 This article is based on the GD Topic “What India gained at the WTO DOHA Round?” to help you provide inputs for your group discussion rounds.

Our last articles in GD PI WAT preparation for MBA Admission 2014 were:

A successful manager should not just be good with his quota of work, but he/she is expected to contribute as part of a team. Ability to work and contribute in teams is a must to succeed in the corporate sector. And that’s what GDs aim to test.

This article is based on the GD Topic “What India gained at the WTO DOHA Round?”

The Doha Round was officially launched at the WTO’s Fourth Ministerial Conference in Doha, Qatar, in November 2001. It is the latest round of trade negotiations among the WTO membership. Its aim is to achieve major reform of the international trading system through the introduction of lower trade barriers and revised trade rules.

It’s the ninth round since the Second World War and the first since the WTO inherited the multilateral trading system in 1995. It aims to produce the first major overhaul of the system in the 21st Century.

The work programme covers about 20 areas of trade. The Round is also known semi-officially as the Doha Development Agenda as a fundamental objective is to improve the trading prospects of developing countries.

The gains that were promised to Indian low cost producers of agricultural commodities during the Uruguay Round negotiations have not been realised. Developed countries have been against the continuation of the market distorting subsidies in Agriculture.

Key points
The Doha Ministerial Declaration provided the mandate for the negotiations, including on agriculture, services and environment, which began earlier.

In Doha, ministers also approved a decision on how to address the problems developing countries face in implementing the current WTO agreements.

Binding the complexity together are two key principles: decisions are by consensus, which means everyone has to be persuaded before any deal can be struck, and “nothing is agreed until everything is agreed”, sometimes called the “single undertaking”. Hence all the 159 members have to agree.

While Indian producers have been unable to get any advantage in the global markets, India now finds that its domestic market is being threatened by cheap imports. Besides textiles and clothing and agriculture, in other areas of India's export interest there are problems of tariff peaks and tariff escalations.

Arguments for the topic

1. India is one of the few developing countries with the size and influence to attract the attention of the world when it raises the flag. The prospect of new markets in the growing Indian middle-class is making the US and the EU much more sensitive to India’s trade concerns.

2. India had her way to retain the Food Security Law. Although it may push India’s minimum support prices above WTO limits, but interim mechanism will provide safeguards till WTO rules are corrected.  New rules for public stock holding of foods in developing countries for food security will be formed.

5. India was the one to prepare the first agreement in the nine Ministerial held after the Doha Round

6.  India gains global leadership by getting a crucial poor-rich country imbalance corrected on a multilateral forum

1. The WTO Multilateral Trade Negotiations in Bali almost failed. Since a complete consensus of 159 member nations is required, it appeared to be wastage of time, energy and money. The negotiations were plagued with irreconcilable differences among members from the outset and have stalled several times.

2. The agreed points are against the rules which govern trade among member nations in goods, services and intellectual property. They are the foundation of the present world economic order.

3. The economists fear that the food security measure may actually increase food prices in the stock holding countries and lead to dumping of excess stocks in other countries.

4. The Bali package covers only a very small fraction of the 40 areas laid out originally in the Doha Declaration. It is quite unclear if and when any of the remaining areas will be resolved.

5. If governments closed their markets for goods and services to the maximum allowed under their present commitments, going to the highest tariffs legally bound in the WTO, and the minimum market opening they committed in services, this could slash world trade in goods and services by almost 10%.

Many members, besides India, feel that though Doha yielded a modest outcome, it could provide clear guidelines and time-lines for progress on some of the more contentious implementation issues.

Commitments made by the developed countries to developing countries have been left unfulfilled this quite clearly represents a case of discriminatory trade policies practiced by the developed countries. These appear more galling in view of the fact that countries like India have largely fulfilled the commitments that they had taken. India’s maximalist position on implementation issues may be justified, as these issues have now become a necessary and important part of any agenda developed during the Doha ministerial.

The Bali package was achieved through the consensus among the 159 members of the World Trade Organization during its 9th Ministerial Conference which concluded on December 7, 2013. This is a milestone for the WTO and its members, proving that outcomes from multilateral negotiations are still possible and that efforts to update multilateral trading rules are still achievable.