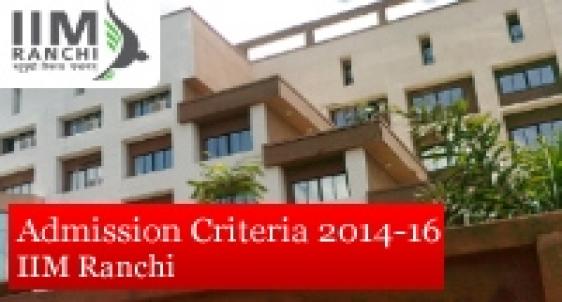 With an aim to help CAT 2013 aspirants to choose the desired Indian Institute of Management, MBAUniverse.com has started a special series - “IIMs Admission Criteria 2014-16” that will equip aspirants with detailed and updated information on the admissions process of all 13 IIMs.

In today’s article of this special series, we will analyze IIM Ranchi admission criteria for the Batch 2014-16.

The following articles will also share with you the admissions, faculty & placement Data of IIM Ranchi for the year 2013-15.

Dr Binay Bhushan Chakrabarti, who has over two decades of teaching, research and industry experience, was a Professor of Finance at the Indian Institute of Management (IIM) Calcutta. He has taught at many top B-schools including IIM-Ahmedabad, IIM-Indore, XIMB amongst others.

IIM Ranchi has also launched a certified Barefoot Manger program to promote entrepreneurship and to impart livelihood skills among the school drop outs and illiterates.

The bird in the logo is a crow. We chose the crow because it has several positive traits that IIM Ranchi stands for. Crow is an epitome of community living and sharing and caring of each other which are the ethos of IIM Ranchi. It is an aerial scavenger that cleans up the earth by eating carcasses. Crows in many cultures are the keepers of knowledge as nothing escapes their keen eye-sight. Crows are very adaptable and can live in different climatic conditions. The bird has been created in a manner that it looks like a forward arrow, taking everybody (The three green strokes symbolize the community), along together for the flight. The Sanskrit verses symbolize the Institute’s vision as working to bring change towards success, not only for one’s self, but also for the community

IIM Ranchi is ranked as No: 26 in MBAUniverse.com B School Ranking 2013-14. Below is the performance of IIM Ranchi on some of the specific criterion – No: of application received in 2013, Number of permanent faculty, total seats, median domestic salary and fees for 2013.

According to the MBAUniverse.com survey data, IIM Ranchi has a total number of 155 seats. The number of permanent and faculty at IIM Ranchi is 13 and 54 respectively.

Analysis of IIM Ranchi admission criteria and selection process 2014-16:
Admission to IIM Ranchi will be based on the performance of candidates in the CAT, Personal Interview & Written Ability Test (PI & WAT) and also based on their profile. The PI & WAT process will be common to all the six new IIMs, namely, Ranchi, Rohtak, Raipur, Tiruchirappalli, Udaipur and Kashipur.

I. Initial Short listing for WAT / PI Process
An initial shortlist shall be prepared of candidates who would be eligible for WAT / PI process for admission to the PGDM 2014 -16 batch of IIM Ranchi. This list would be purely based on CAT 2013 performance.

Table 1: The cut-off percentile CAT scores for consideration for admission to IIM Ranchi

The above cut-off percentile figures are just indicative and actual CAT percentile cut-offs are expected to be close to the cut-off for previous years. The shortlisted candidates of all the six new IIMs will be merged to make a combined short-list for further processing.

The criteria given in Table 1 will be used to rank the students in different categories (General, NC-OBC, SC, ST and PWD) and for short listing of candidates based on ranking within categories for further processing.

The common PI & WAT for the six new IIMs will be coordinated by IIM Tiruchirappalli.

The details of the above mentioned components are mentioned as below:

(a) CAT Percentile
30 percent weightage is assigned to the CAT score of the candidates who are eligible for PI & WAT.

The profile scoring methodology for IIM Ranchi is given below:

Gender Diversity (5 marks)
5 marks will be awarded to female candidates only.

IIM Admission criteria 2014:  How to get shortlisted for seven Older IIMs?

Stay tuned to MBAUniverse.com for more analytical features on Top B schools and their admission process