MBAUniverse.com News Desk | :
April 16, 2014
The globally-respected accreditation body, AACSB International held its International Conference and Annual Meeting (ICAM) in Singapore on April 7-9, 2014. This article represents some of the key learnings from ICAM from the Indian perspective 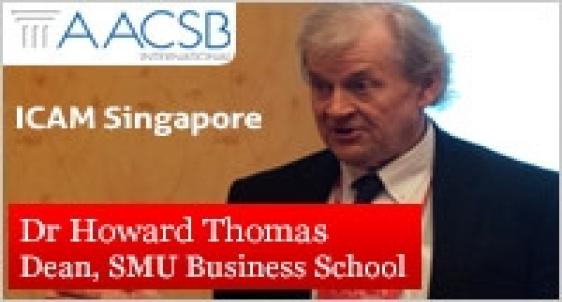 The Asian context of management education is very different. So accreditation and rankings bodies must be very careful in assessing them.

Representing MBAUniverse.com, I was invited to attend the meet in Singapore. Here are some of the key learnings from ICAM from the Indian perspective.

The new AACSB Accreditation standards, adopted in 2013, focus on three themes: Innovation, Impact and Engagement. Building on these new standards, the overarching objectives of the conference were to strengthen the connection between academe and business practice, foster more innovation in business education, and encourage schools to focus more on their impact. From the huge response to the seminars and sessions at ICAM, these themes have been widely accepted. The talks, seminars & discussions at ICAM, based on these themes, were well accepted and meaningful.

2. Asia is the center of management education

If the discussions at ICAM 2014 are any indicator, it’s clear that Asia is the hotspot of global management education. AACSB’s own efforts are now to get more B-schools from Asia to pursue its accreditation standards. Many Asian countries, particularly China and South Korea are embracing the AACSB standards. The AACSB convention had almost equal number of B-schools participating from Asia and Non-Asia. This is a huge vote of confidence for AACSB in Asia.

So, it’s clear that behind the scenes, the AACSB Singapore office, set up about 4 years back, has substantially increased AACSB’s reach in Asia. Its membership and accreditation in the region have grown 118% and 147%, respectively!

3. Global Accreditation is Passport to an Elite Club

As exemplified at ICAM Singapore, for B-schools that have earned their way into this rarified club, their AACSB or EQUIS badge is a passport to quick global recognition – at workshops, lunches & dinner meetings, and other social events. It gives its holders instant credibility amongst top tier ‘peer’ B-schools from world over, paving way for academic alliances, and joint initiatives. The accreditation logos are proudly, prominently, displayed on B-school’s business cards, websites, and other promotional materials, sometimes bigger than the institution’s logo itself!

Sadly, only four, out of ‘3500 Indian B-schools’ have earned their way into this top league of AACSB & EQUIS Accreditation. Of course, realizing that they are being left behind, in last few years, a lot more Indian B-schools are pursuing top two accreditations from India.

4. India is much behind China, and rest of Asia, in Accreditation race:

While many IIMs and some top tier B-schools may want to dismiss AACSB Accreditation as new form of global imperialism, it’s a necessary passport to global league.

Chinese MBA education started in only in 1991, while Indian MBA education can trace its roots back in 1950 & early 1960s when IIMs were set up.

In China, there is a definitive drive from the top to achieve international quality standards and develop global reputations amongst leading business schools. And the government has supported their efforts to engage in the valuable accreditation process. By earning international accreditation, Chinese business schools have become more capable of attracting top scholars, as well as talented students who might have gone overseas. Accreditation has also helped schools to benchmark and collaborate internationally.

The lessons for India are to invest more resources in its business schools to achieve international standards, reduce regulatory burden to enable innovation, and engage with the AACSB International network.

Yes, there are more Indian B-schools that are engaged with AACSB. Today, there are 43 AACSB members in India, second only to China at 46, or 54 with Hong Kong included. Five years ago, there were 15 members in India and none were accredited.

5. However, Asian context for management education is different, and needs different approach

However, AACSB and other accreditation bodies need to recognize that ‘global accreditation template’, that focuses heavily on research, are not universally applicable. Should B-schools in ‘emerging economies’ like India focus on research, or should they first focus on teaching and imparting right skills for their primary stakeholder – the paying student, looking for jobs to move out of poverty and social ignominy?

Howard Thomas, Dean of Lee Kong Chian School of Business, Singapore Management University put this well in his speech at ICAM when he said, “Asian continent is very diverse. Its culture, people, practices, business, society is all very heterogeneous. The Asian context of management education is very different. So accreditation and rankings bodies must be very careful in assessing them.”

Hopefully AACSB will lead the world in creating ‘context specific approach’ to accreditation, and thus encourage impact, innovation and engagement in Asia.

Stay tuned to MBAUniverse.com for more news and updates on AACSB