MBAUniverse.com News Desk | :
May 22, 2014
The CAT 2014 exam will again be conducted by Indian Institute of Management Indore while IT major TCS will be the new CAT exam testing agency. 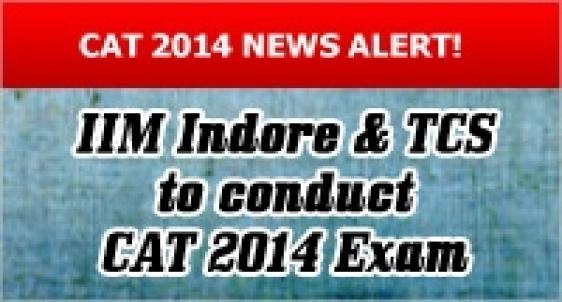 Yes, IIM Indore is conducting CAT 2014 and I will continue to hold the position of CAT Convener

The Common Admission Test (CAT) 2014 will again be conducted by Indian Institute of Management (IIM) Indore. Confirming this development with MBAUniverse.com, Dr. Rohit Kapoor CAT 2014 Convener said, "Yes, IIM Indore is conducting CAT 2014 and I will continue to hold the position of CAT Convener"

He also confirmed that IT major Tata Consultancy Services (TCS) will be the testing-agency for CAT 2014.

MBAUniverse.com was the first portal to announce the news of Tata Consultancy Service to be appointed as the new CAT 2014 exam testing agency. Our headline on January 31, 2014 ran - CAT 2014: TCS set to replace Prometric as new CAT testing agency

IIM Indore will hence make history by conducting two CAT exams in a row. While the IIM and CAT Convener remain the same, their partnership with TCS is expected to bring new surprises and positive changes in the CAT exam process. There are many areas in CAT examination process (like controversial score normalization process) that require a re-look, something which is high on the agenda of IIMs and TCS.

Key areas that need to be addressed by IIMs & TCS for successful CAT 2014 exam are:

- Scoring Issues and Court Cases
CAT aspirants are quite confused on the Normalization scoring process of IIM. Soon after the declaration of CAT 2013 results, various petitions were filed in courts over discrepancies in CAT results. At present various cases are still pending while courts have given notices to IIMs, IIM Indore and Prometric- the testing agency.

In CAT 2014, both TCS and IIM Indore have to come out with a transparent solution regarding evaluation of CAT, normalization scoring process or disclosure of raw scores to avoid this confusion and litigation.

IIM Indore introduced Online CAT Registrations for the first time in CAT 2013, which provided a lot more convenience to the aspirants. The online voucher sale received a good response from the MBA candidates had more than 55 per cent share of the total CAT vouchers sold.

IIM Indore and TCS should continue to make CAT registration process more convenient for candidates. They should also engage with potential applicants with aggressive digital marketing.

CAT exam has been marked with technical issues and delay in exams every year.  In CAT 2012, a number of incidence of technical failure, shifting of CAT test centers and delay in Biometric scan, were reported in various testing centers across Delhi NCR.

Although, last year there were no reports of any such technical issues during the 20 day window of CAT exam. The new CAT 2014 testing agency, TCS will have to make sure that CAT aspirants are not forced to face any such situation in during CAT 2014 exam.

-  Avoid Error in Questions
An error in CAT question paper was reported on the first session of Day 10 on October 28, 2013. MBAUniverse.com was the first portal to report the error and inquired the same with Prometric (the agency which conducted CAT 2013).

Responding to the MBAUniverse.com query, Prometric said, An error has been detected in one question, in a DI item in CAT 2013, during the morning exam of Oct 28th. This single question publishing error impacts 2.5% of CAT 2013 candidates.

Both IIM Indore and TCS will have to make sure that incident similar to this must not appear during CAT 2014 exam.

- Apart from sale of CAT2014 Voucher at designated Bank branches, Candidates can now register, apply online and can make online payment of the requisite fee.

- Dr. Rohit Kapoor has retained his position as CAT Convener form last year. Dr Rohit Kapoor is a faculty in the Operations Management and Quantitative Techniques area. He is a Fellow of IIM Ahmedabad. His research interests are in the areas of Supply Chain Management, Production Planning, Inventory Control and Network Design.

- Dr Rohit Kapoor was credited with making CAT 2013 registration process online, which was much appreciated for its ease by candidates.

MBAUniverse.com has always been the first portal to bring out confirmed and latest news on CAT 2014 exams and CAT 2014 exam preparations.