3 types of twisted Jumbled Paragraphs in CAT 2014: Know the strategy to solve

MBAUniverse.com News Desk | :
June 21, 2014
Questions on Jumbled sentences in CAT have gone for perceptible changes over a period of time and now you may expect more innovative questions than standard ones in CAT 2014. 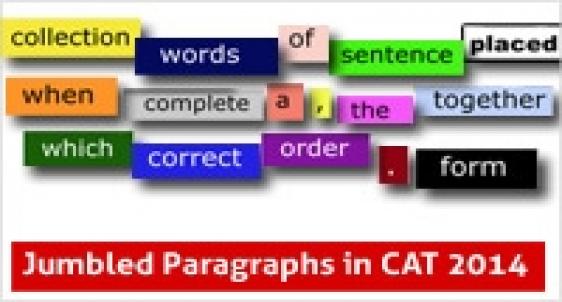 These are different questions on jumbled paragraphs in the section of Verbal Ability that have consistently been bearing the brunt of twisted questions.

Questions on Jumbled sentences in CAT exam have gone for perceptible changes over a period of time and now you may expect more innovative questions than standard ones in CAT 2014. CAT 2006 had a new type of question for the first time – Inferring/completing the last sentence of a paragraph and CAT 2012 again created panic among the aspirants with a twisted type of element in Parajumbles that asked the aspirants to pick a sentence which was out of context in the Jumbled paragraph. Both these types are settled with CAT exam and make their presence felt every year in the test since their first appearance.

It is not the level of difficulty but the cause of worry for CAT takers is the unanticipated set of questions in Verbal Ability which appear on their computer screens and take them off guard. Prof S K Agarwal, Mentor and Expert on Verbal Ability shares the probable types of twists that aspirants may encounter in parajumbles in CAT 2014.

It seems the CAT organizing people are never satisfied with the high level of difficulty of CAT questions and go on placing something new more twisted and difficult than previous year. By the time candidates get settled after practicing mocks and replica tests with one type of questions another surprise is thrown before them.

Although the structure and sections will hopefully not surprise the CAT 2014 takers and the basics on which questions are supposed to be formed will also remain the same, the aspirants may definitely expect some twists in the type of questions asked in the test. In fact, these are different questions on jumbled paragraphs in the section of Verbal Ability that have consistently been bearing the brunt of twisted questions.

Twist 1; ‘Out of Context sentence’

CAT 2012 and 2013 had 2 twisted questions in each session on Parajumbles which in all probability are expected to be repeated in CAT 2014. The difficulty level in various types of questions based on jumbled paragraphs in CAT has already been high enough and on the top of it, you have to pick an ‘Out of Context sentence in jumbled paragraphs’.

This new type of parajumble consumes more time and the options are so close that it is difficult to get the same correct in one go. The concept is to form the coherent paragraph and then pick out the ‘out of context sentence’.

Direction- Out of the five sentences as given below and labelled A,B,C,D,E in the question, four, when arranged properly, will form a meaningful and coherent paragraph while one of the sentences is out of context. Choose the most appropriate order of sentences out of the given options with out of context sentence marked in brackets.

2. and Often couples who had lived together for years had to separate

3. These laws prohibited intermarriage between people of different races

4.  Which caused loneliness and bitterness because of ignorance and a desire to see themselves as better than people of other races

5.  Up to the 1960s, miscegenation laws were still enforced in some parts of the United States

Ans. 4. ECBA(D) – Explanation – E-Chronology up to 1960 what was in force-C-what were they-so follows; B- pair to C; A-concludes the para. D-is out of context as it discusses the impact of separation and not of legislative laws, although indirectly they may be associated to the same. It should become a part of following para. Obviously ‘D’ breaks the coherence of the paragraph and stands alone and become a fragment to the paragraph.

Closed Group for CAT 2014 crackers, do you have it in you

How to start our CAT 2014 preparations? I need help?

There could be 2 parts of parajumbles clubbed together and the question could be to find out the sentence that connects or disconnects these 2 jumbled paragraphs. The best method to solve such questions is to recall the rules to pick the odd man out of the four five related words – the same rule applies but with much advanced thought process and understanding to click the right sequence.

2. There may be one jumbled paragraph of more than 5-6 sentences, and you may be asked to form coherent paragraph apart from picking out the sentence that de-links the part of paragraph. Hence, the same sentence can link or de-link the two paragraphs depending upon the form of question in the examination

Direction-Out of the seven sentences given below and labelled A,B,C,D.E,F,G in the question, three each, when arranged properly, will form meaningful and coherent paragraphs respectively, while one of the sentences links two separate paragraphs. Choose the most appropriate order of sentences out of the given options with linking sentence marked in brackets.

A. discounted to give the present value. Though there are many theories of how shares are priced, the price-to-earnings ratio remains the most popular.

B. Any fall in earnings affects the stream of future earnings and impacts the company's share price.

C. This is why share prices react to a fall in earnings even where companies are still making profits.

D. The share price of a company, whether bank or non-bank, essentially reflects market expectations regarding its future income stream

E. not their balance sheet, every quarter. It is also why companies issue 'guidance' about their likely earnings in the coming quarter/year

F. It is because of the significance of earnings for the share price that the capital markets regulator, the Sebi, requires companies to publish their income statement,

Ans. -3. DACFEG(B): Explanation- This probable type of question consists of two parajumbles. The coherence of sentences can be formed with the same tips discussed above. D-opens the para - What does share price reflect – the statement defines it followed by A-future income stream discounted to give the present value; C- is the effect of the ratio. Next parajumble begins with F - Why is the requirement of publication of income statement-cause & effect, followed by E- Balance sheet not required since earning is important; G clarifies that Banks are no exception.  B- However is inclined towards F-beginning the next para. Other sentences describe the determination of share price and mechanism while B-goes to describe about the impact of fall in earnings. Hence (B) links the two paragraphs

Twist 3.Find the opening and closing sentence with out of context sentence

Aspirants might remember that one of the types in Jumbled paragraphs is where opening and closing sentences are given beforehand. How would you solve it, if you were asked to find the opening and closing sentences along with an out of context sentence while the middle part of Jumbled paragraph is given in form of jumbled sentences which also includes out of context sentence.

However, the stiff entry conditions and the fact that only 11 states and union territories have agreed to allow foreign-funded stores have proved to be a big deterrent. Global retailers Walmart, Auchan, Carrefour, and Tesco have all evinced interest in opening retail stores but are yet to put in a formal application. An attempt by the department of industrial policy and promotion (DIPP)

A. Various sections within the government feel it has not been able to capitalise on its decision to open up the multi-brand retail sector by putting in complex conditions.

B. the administrative department for the FDI policy, to simplify the norms by issuing some clarifications has left both the domestic and foreign retailers equally disappointed.

C. the United Progressive Alliance government had in September opened up the multi-brand retail sector, braving political opposition from inside and outside the coalition and even staked its survival

Ans.4. CB(A)-Explanation – C- who started it?-the UPA government as discussed in the middle order para. The middle order is followed by the fact that DIPP – the Administrative Department…. At B. (A) is out of context since all other sentences describe the pros and cons, various actions taken/not taken whereas in A, it is the feeling on personal level which may/may not be explicit or authentic and cannot be used as action taking strategy.

Error Correction in sentences and paragraphs

Get certain clues, which are although usual in CAT but going by reputation of CAT, definite predictions cannot be made. However, following clues will help to solve such Parajumbles.

-Parajumbles with given opening & closing sentences usually do not begin with reference words also, like, This, that, these, those, thus, etc.

-Think what would be the order, if you wrote the same sentences.

-Now, Find out the linking words e.g. conjunctions, pronouns e.g. He/she/it/who/ this/ these/that/which etc. as they indicate that they must have been used in place of some nouns. These words would help to find the link between the sentences.

-Find out, if there is any historical or chronological event based on time factor so that the same may be connected to opening sentence or may lead to closing sentence
-The use of words like therefore, however, summing up, hence, henceforth, hitherto etc. will either lead you to closing sentence or to next paragraph-meaning change of idea, so watch out for the same.

- More and more practice is the key to success.

If you want to talk directly to CAT 2013 Toppers to get right advice and suggestions for CAT 2014 preparation, Click Here:
http://www.mbauniverse.com/forums/forum/meet-the-past-cat-toppers-know-how-to-score-99-percentile

Logical Reasoning an integral part of VA in CAT 2014; don't miss out

Jumbled Paragraphs in CAT 2014: Know the types & how to prepare

CAT 2014 Exam Alert: Are you going in right direction? Check Yourself!

5 inspirational tips to CAT 2014 aspirants; how to reach the destination

Stay tuned to MBAUniverse.com for more updates on CAT 2014 preparation