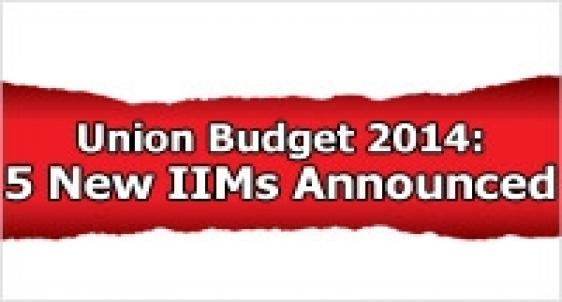 The country needs a large number of Centres of higher learning which are world class. Five IIMs would be set up in the States of Himachal Pradesh, Punjab, Bihar, Odisha and Maharashtra.

Mr. Arun Jaitely said, “The country needs a large number of Centres of higher learning which are world class... Five IIMs would be set up in the States of Himachal Pradesh, Punjab, Bihar, Odisha and Maharashtra.”

Is this a good move, or an act of haste?

Considering this, IIMs have only around 1% share of total management seats in India. In this light, this is a good move by government to expand the total number of quality MBA education seats in India.

Considering 5 more state has an IIM, it will be total of 18 IIMs. The total seats for combined 16 IIMs will reach to 3935 seats thus an increase of 18% (considering a batch size of 120 for the 5 announced new IIMs). Out of the total seats, 27% will be reserved for OBC’s, 15% will reserved for SC’s and 7.5% seats is reserved for ST category making a total of 49.5%. Hence, the general category will now have around 2020 seats at their disposal, an increase from 1684 seats earlier.

Among the possible locations for new IIMs in the states of Himachal Pradesh, Punjab, Bihar, Odisha and Maharashtra are the likes of Pune, Patna, Shimla, Bhubaneswar, etc as several older IIMs are located in the capital of their states.

Capacity planning is key to successful roll out

While opening new IIMs is a positive move, the government must make sure to do advance planning before the final roll out. Adequate quality faculty and infrastructure must be assured for all these 5 New IIMs before they are allowed to function as a management institution.

We have already seen the fate of 6 new IIMs which were forced to function from a temporary building and also with lesser quantity of faculty members. Couple of these New IIMs are still to fully move out to their new and permanent building while the number of faculty which was as low as 5 in the beginning has now been able to reach the double figures.

Thus, keeping these in minds, we expect a stern and detailed step by the Narendra Modi government who is famous for his accurate planning and analysis before any final decision.

Other higher education announcements in budget 2014

Finance Minister also announced setting up of 5 new IITs. He said in his speech, “I also intend to set up five more IITs in the Jammu, Chhattisgarh, Goa, Andhra Pradesh and Kerala.”

Currently there are 16 IITs in operation in India. There are set up at Mumbai, Delhi, Kanpur, Kharagpur, Chennai, Guwahati, Roorkee, Hyderabad, Patna, Bhubaneswar, Ropar, Jodhpur, Gandhinagar, Indore, Mandi and Varanasi. A total of 8862 seats are there in 16 IITs in India.

Although ISM Dhanbad is also usually considered among IITs and has a total of 1023 seats making the grand total as 9885 seats. In the general category 4,844 seats are available.

Finance Minister also made some other beneficial announcements for improving education in India. In his speech he said:

- To take advantage of the reach of the IT, I propose to allocate a sum of `100 crore for setting up virtual classrooms as Communication Linked Interface for Cultivating Knowledge (CLICK) and online courses

- An amount of ` 28,635 crore is being funded for SarvaShikshaAbhiyan and `4,966 crore for Rashtriya Madhyamik Shiksha Abhiyan. A School Assessment Programme is being initiated at a cost of `30 crore.

- To infuse new training tools and motivate teachers, “PanditMadan Mohan Malviya New Teachers Training Programme” is being launched. I am setting aside an initial sum of `500 crore for this.

To ask question to CAT Verbal Expert on MBAUniverse.com Forum, Click on below links:

To ask question to CAT Quant Expert on MBAUniverse.com Forum, Click on below links:

If you want to talk directly to CAT 2013 Toppers to get right advice and suggestions for CAT 2014 preparation, Click Here:

If you have any complains about B- schools, write here: Register your Complain about B-schools

MBAUniverse.com offers a comprehensive preparation package coupled with over 200 online interactive classes with Top CAT experts including from IIMs for CAT 2014 preparation. Visit the link below for more information and new batch schedules:

For more updates and MBA news, Stay tuned to MBAUniverse.com