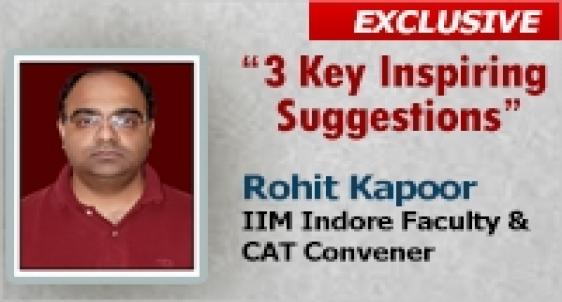 "Read the instructions provided in your admit card carefully. Reach to the test center well before time. Gear up yourself and give your best" Dr Rohit Kapoor, CAT 2014 convener

Despite number of changes and surprise elements anticipated in CAT 2014, aspirants don’t have to get disheartened or demotivated. The preparation should continue at a greater pace and in right direction.

Dr Rohit Kapoor, faculty IIM Indore and CAT 2014 convener advises and shares the motivational words for CAT 2014 aspirants with 3 key important pieces of advice that would be the success mantra for the test takers. The inspiring words of Dr Kapoor “Please Read the instructions provided in your admit card carefully. Reach to the test center well before time. Gear up yourself and give your best. I wish all of you best of luck!”  contain the important suggestions for CAT 2014 aspirants to ace the test.

All the CAT 2014 test takers have received their Admit cards and have been advised by CAT Centre 2014 to immediately approach the CAT 2014 help desk  if they are unable to view their Admit Card on the site even after logon process. The advice of Dr Rohit Kapoor to “read the instructions provided in your admit card carefully” signifies the importance of the mandatory primary document the hard copy of which has to be carried by the test takers to the Test Centre on CAT 2014 exam day.

The Admit Card is to be submitted for verification at the time of the test. At least one original (not photocopied or scanned) and valid (not expired) photo identification card (such as College ID, Employer ID, Driving License, Passport, PAN Card, Voter ID, Aadhaar, UID) should also be presented .The candidate's photograph and signature images should be legibly printed and visible on the photo ID card and should match the name on Admit Card. The Photo ID card should not be damaged or smudged.

Print the Admit card on an A4 size paper using a laser printer. Admit Card is valid only if the candidate's photograph and signature images are legibly printed.

This Admit card is valid only for the test date and session time as specified in the Admit Card.

Candidate will be disqualified from CAT 2014 if he/she attempts to appear for the test more than once.

Mobile phones or any other electronic gadgets such as watches, calculators and stationary items like pen, pencil, and paper are NOT ALLOWED inside the examination hall. There is no facility for safekeeping of your personal belongings outside the test hall and CAT Centre 2014 will not be responsible for its loss. Only Admit Card & Photo ID Card only will be allowed inside the test hall.

Friends and relatives accompanying the candidate will not be allowed inside the test centre.

Rough sheet(s) and pen will be provided to the candidate for rough work which will have to be returned after the test. Candidate should write his/her name and registration number on the rough sheet(s).

Candidate needs to make his/her own travel and stay arrangements for attending the test.

The admit card is provisional, subject to the condition that the candidate has fulfilled the eligibility conditions like academic qualification, category, PWD status etc. as mentioned in his/her application which is subject to verification in the consecutive stages of the selection process.

Check the details in Admit Card

While viewing your admit card on CAT 2014 site please ensure to check that all the details are available in it.  If you find any information missing, please immediately contact the CAT 2014 help desk.

Name: Your name as entered in the registration/application form of CAT 2014

Registration Number : The registration number is same as your registered user id for CAT 2014

Date of Birth : your date of birth as you entered in the application form

PWD/DA : In case the candidate is differently abled/physically challenged, it will have ‘yes’ else ‘No’

Time / Session: Examination session (Before noon or after noon)

Test Center: The exam centre in the city where you will be required to appear in the test

You will have to affix a recent coloured passport size photograph on the hard copy of the Admit Card in the given box.

Be in time at Test Centre

According to the instructions and guidelines the reporting time at CAT 2014 test centre is 2 hours before the exam the morning session of which begins at 9.30AM and afternoon session begins at 3.00 PM. It is therefore very important that the candidates should reach by the specified hour. CAT 2014 further has suggested that “Candidates are advised to locate their test centre and its accessibility at least a day before the test so that they can reach the centre on time on the day of the test.”  It will surely help the test takers to know the distance, route, travel time and mode of conveyance available from place of stay to the exam centre.  Arriving late at the test centre is not advisable as you may not be allowed inside the testing room.

Give your best in testing room

The final advisory from Dr Rohit Kapoor to the CAT 2014 aspirants is “Gear up yourself and give your best”.  This is very important since the full length practice test has been published, aspirants now know well the exam pattern, type of questions, navigation tools.  They should focus on well planned preparation strategy  for CAT 2014, should take more mocks according to new pattern of CAT 2014, learn how to attempt the entire test without breaks. It will give them real testing room feeling. All the relevant topics should be covered with versatile question pattern.

Once the candidates prepare well and have practiced well, the need is to give your best in the testing room. So keep yourself healthy and save yourself from any problem that arises due to change of seasons as onset of winter can be seen. Less than a fortnight remains to appear in CAT 2014 according to Prof S k Agarwal Verbal Ability expert and mentor on CAT preparation you should make sure you that no stone is left unturned in your CAT 2014 preparation journey. Have confidence and remain motivated.

CAT 2014 Admit Card: All the details available; Check carefully to confirm your candidature

CAT 2014 Admit Card is out: Download now and take the print

Stay tuned to MBAUniverse.com for more tips on CAT 2014