MBAUniverse.com News Desk | :
December 13, 2014
More surprises from CAT 2014 results are expected as the adopted scoring normalization method is not only new but has also not been shared well 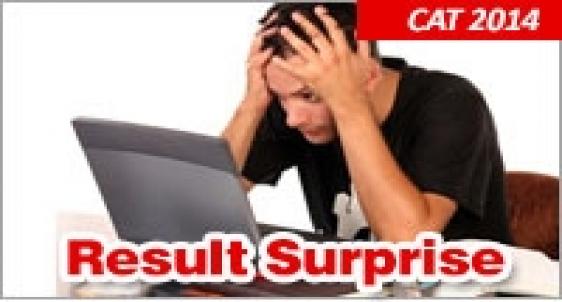 CAT 2014 are getting more apprehensive of receiving yet more surprises from CAT 2014 results as the adopted scoring normalization method is not only new but has also not been shared well to substantiate its claim of fairness and transparency. So far CAT 2014 takers got the surprises in conduct of CAT 2014, its testing pattern, different type of questions, navigating tools and different type of testing experience than they had in earlier CAT exams. Now with the CAT Centre 2014 announcement to adopt different score normalization process on the lines of GATE has generated another furore calling for further clarity.

The foot of IIM Indore as you might remember with the declaration of CAT 2013 result got caught in a trap causing embarrassment to the creditability of CAT. Candidates scoring zero marks scored good percentile in CAT 2013 and as such legal cases were initiated in the courts of Indore on score normalization process. A new testing agency TCS has been reined in to conduct CAT 2014 and undoubtedly CAT 2014 has been more smooth and shorter as it summed up the entire exam for 1.97 lakhs candidates only in 4 sessions on 2 days instead of earlier long 40 sessions in 20 days.

CAT 2014 Result: Be ready for surprises

How good the is GATE methodology has not been shared by CAT Centre 2014. Would it be transparent and fair enough to keep the marking standard and score normalization process on the expected scoring anticipations? This can be known only when the CAT 2014 result is declared.

The surprises could be in the form of scoring low and getting unanticipated high percentile or scoring high and getting almost the similar percentile. In both the cases candidates may begin smelling a rat in the process.

Claim of Equity: How true!

CAT Centre 2014 has declared “In order to ensure fairness and equity in comparison of performances of the candidates across different test sessions, the scores of the candidates shall be subjected to a process of Normalization. The Normalization process to be implemented shall adjust for location and scale differences of score distributions across different forms and the scaled scores obtained by this process shall be converted into percentiles for purposes of shortlisting.”  How it will be done is not clarified in the document.

As regards the transparency of normalization process across the multiple sessions CAT Centre 2014 says “The process of Normalization is an established practice for comparing candidate scores across multiple Forms and is similar to those being adopted in other large educational selection tests conducted in India such as Graduate Aptitude Test in Engineering (GATE).”

Nowhere in the document on ‘Normalization of Scores of CAT in 2014’ published in public domain by CAT Centre 2014, it has been clarified what exactly will be the formula to arrive at the normalized scores although this could have been conveyed well by the CAT Centre 2014 by citing a few examples. This could have satisfied the CAT 2014 takers as the methodology could have been conveyed. What the CAT 2014 takers expect now after their own calculation, may or may not be as per the concealed standards of CAT Centre 2014 and this may again create a problem unless clarified.

Many activities by CAT Centre 2014 were delayed or postponed causing anxiety among the CAT 2014 test takers. Now on the similar note candidates are worried whether the declaration of CAT 2014 results would be postponed from 3rd week of December to 4th week of December 2014.

Chances are high going by the past trend of the activities in conduct of CAT 2014 like issuance of Admit Card, placing the Mock test on site and number of other activities. So be prepared it is not the CAT 2014 result only but the date of declaration of CAT 2014 result is also a mystery till date.

This is despite the fact that CAT 2014 convener Dr Rohit Kapoor has assured that the final checks are underway and the CAT 2014 result date will be announced shortly.

Stay tuned to MBAUniverse.com for more updates on CAT 2014 Result