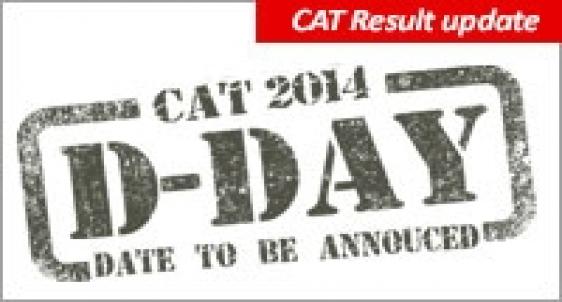 Since the third week of December 2014 has set in and there is no sign from CAT Centre 2014 to announce the CAT 2014 Result Declaration date, it appeared that like other activities the CAT 2014 result declaration can also be delayed by a few days.

Raising the query with CAT 2014 convener has resulted in the most positive response that in next 2 days exact dates for CAT 2014 result declaration will be announced. Now there is no need to be anxious or panicky as the result is expected to be declared shortly and in all probability as per the originally announced schedule.

Dr Rohit Kapoor has earlier conveyed that final checks were going on to declare the results. The information was well shared by MBAUniverse.com with the CAT 2014 takers.

During the past 6 years since 2009 when CAT changed its face from paper pencil mode to computerized exam, for the first time CAT 2014 the gateway to IIMs in admission 2015 was conducted in the shortest testing window of 2 days in 4 sessions on Nov 16 and Nov 22, 2014 across the country.

Declaration of CAT 2014 results just a month after the exam and despite being conducted a month later than earlier CAT exams, is yet another achievement for CAT Centre 2014.

CAT exam in earlier years used to start in the month of October and continued upto the first half of November. The results in earlier years were announced after the lapse of 2 months from the close of the CAT exam. If you calculate this period from the date of beginning the CAT it will go beyond 3 months.

Early declaration of CAT 2014 result will also have positive impact on the process of  MBA/PGDM admission 2015 in IIMs and other top rated B schools like FMS, SPJIMR, MDI, IMI, IMT, FORE, BIMTECH, JBIMS, TAPMI, NITIE and many more.

It will not only help the B schools to shortlist the candidates for admission round in the month of January 2015 but will also enable them to start the PI process in January 2015 itself, offer final admissions in the month of February-March 2015 and begin the session immediately after that.

Approximately 4K students are proposed to be admitted in 19 IIMs for the PGDM batch 2015-17. Apart from 7 older IIMs and 6 new IIMs, 6 more IIMs announced by Govt of India will start functioning in admission session 2015.

Let Anxiety be put to rest

Dr Rohit Kapoor CAT 2014 convener and faculty at IIM Indore has already assured the CAT 2014 takers “We are in the activity of processing the results. Final checks are also underway. As far as dates are concerned, we will shortly announce it on our website. Request the candidates to wait for now”

The further assurance by the CAT 2014 convener to announce the exact date of declaration of CAT 2014 result shortly should now put the anxiety and speculation to rest.

Stay tuned to MBAUniverse.com for more updates on CAT 2014 result