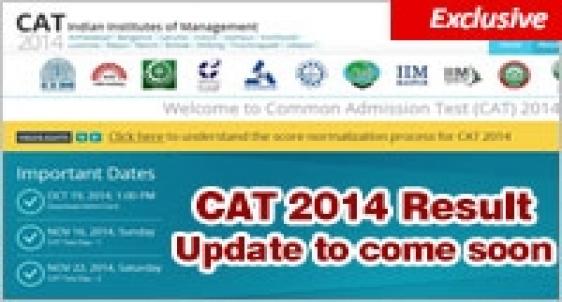 Keeping the option of CAT 2014 result date anxiety open for the CAT 2014 test takers CAT Centre 2014, has shared that ‘Exact date of CAT 2014 Result declaration will be shared soon. CAT Convener Dr Rohit Kapoor has requested the CAT 2014 takers to ‘wait for now’ since ‘final checks are underway’.

Thousands of CAT 2014 takers are waiting for the announcement of exact date of CAT 2014 result declaration which is supposed to be declared in the 3rd week of December 2014. While 2 days of the third week of December have already passed no sign of such announcement is seen from CAT Centre 2014. MBAUniverse.com is in constant touch with CAT Centre 2014 and is taking every care to update the CAT 2014 test takers on the result declaration and the probable surprises associated to CAT 2014 result.

Considering the eagerness and anxiety of the candidates Dr Rohit Kapoor convener CAT 2014 had earlier shared ‘We are in the activity of processing the results. Final checks are also underway’. It emphasizes that the CAT Centre 2014 is also ensuring checks and rechecks on the processing of the CAT 2014 result before finally publishing it in public domain. It could also be the impact of CAT 2013 result that was marred by certain anomalies causing embarrassment to CAT conducting IIM Indore as a few cases are pending in the courts of Indore on the issue.

Gear up to choose the dream B school

CAT 2014 result whether declared in 3rd or 4th week of December 2014 may not be much different from your expected lines if you have got the calculation correct somewhat. Despite coming with many firsts in the type and pattern of exam, scoring pattern, score normalization process the calculation of percentile can be well anticipated, in case you have gone by the GATE formula and remember where you went wrong.

On the basis of your calculation, you can visualize the admission opportunities in IIMs and other top rated B schools where you can explore admission possibilities. You do not need to apply to any IIM separately but for other B schools, you have to apply individually. Most of these B schools have closed their admission process like FMS, MDI, SPJIMR.  Please therefore check for the B schools of your choice where admission application process is open.

Stay tuned to MBAUniverse.com for more updates on CAT 2014 Result