MBAUniverse.com News Desk | :
December 31, 2014
XAT 2015 is going to have a changed face with more number of Multiple Choice Questions (MCQs) with the same exam time duration of 3 hours 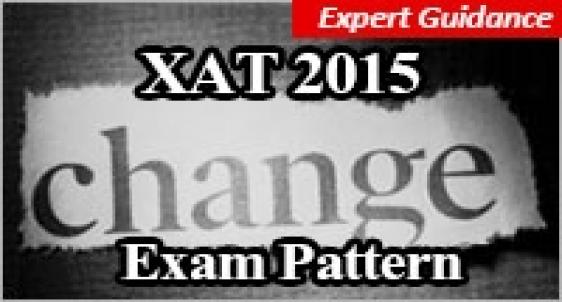 "Each question would carry one mark each and there would a negative marking of 1/4 for every wrong answer. Marking in GK would be same as the first section." Prof Munish Thakur, XAT 2015 convener

Xavier Aptitude Test (XAT) 2015 is going to have a changed face with more number of Multiple Choice Questions (MCQs) with the same exam time duration of 3 hours. It implies more time constraints to attempt the test as time per question to solve will be less in XAT 2015.

In all there will be 114 MCQs instead of 101 or 103 questions as used to appear in earlier exams. All the questions will carry equal weightage of marks in XAT 2015.

XLRI Jamshedpur one of the highly ranked and premium B schools in India will conduct XAT 2015 at All India level to provide level playing field for the XAT aspirants coming from all backgrounds. Registration for XAT 2015 was opened on August 12, 2014 and the process stands closed as on Dec 8, 2014 after getting extended twice.

XAT 2015 will have a changed pattern. According to Prof Munish Thakur XAT 2015 convener and Chairperson XLRI admission 2015 “XAT 2015 would have two sections. First section would carry 84 questions. The second section would consist of 30 questions on GK and an essay topic.” Accordingly the total number of questions that used to be 101 to 103 in earlier XAT exams will now have 10-11 more questions. The maximum contribution in enhancing the number of questions will be from GK section.

In regard to changes in sectional pattern XAT 2015 convener Prof Munish Thakur shares “In the first section there will be 28 questions on verbal ability, 23 questions for Decision Making and 33 questions on QA and DI. The second section will consist of 30 questions on GK and an essay topic”.  Candidates might remember that in earlier XAT exams there used to be 20 questions on General Knowledge to be attempted in 10 minutes.  While time allotted remains the same in XAT 2015, number of questions are more.

Accordingly, the sectional formation of XAT 2015 will as follows

The candidates will not have any break in between except for the fact that Objective MCQ part will be over in 150 minutes and next 30 minutes will be allotted for essay writing part.

XAT 2015 test takers will be expected to complete the first 3 sections of the first part of the MCQ exam namely Verbal and Logical Ability; Decision Making; Quantitative Ability and Data Interpretation in 140 minutes while questions in General Knowledge section will have to be attempted in 10 minutes only. 30 minutes will separately be allotted for essay writing test.

XAT 2015, to be conducted on January 4, 2015 will be divided in two parts. As shared by Prof Munish Thakur, following number of questions are supposed to appear in XAT 2015 in different sections

Part-2
The second part in XAT 2015 will consist of 30 General Knowledge questions in MCQ format and a test on writing ability. Aspirants will be expected to complete their GK test in 10 minutes and devote 30 minutes to write an essay on a given topic.

Candidates having been tested on objective Multiple Choice Questions (MCQs) will also be tested on real life driven written communication skill based on wider perspective on important issues of our times. The candidates in XAT are tested on both the counts. Their performance in essay writing will also form the base of their final section round.

According to Prof Munish Thakur “Each question would carry one mark each and there would a negative marking of 1/4 for every wrong answer. Marking in GK would be same as the first section.”

Earlier XAT used to place 20 GK questions. The marks of General Knowledge will not be used for determining the percentile and cut off at first stage of selection. However it is used by XLRI and some other Associate Member Institutes at the time of final selection.

For every wrong answer one fourth mark will be deducted out of the earned score. This may substantially reduce the percentile of a candidate in XAT 2015.

XAT is the largest MBA/PGDM entrance test having Multiple Choice Questions (MCQs) in paper pencil mode, conducted in India. Approximately 90 thousand candidates have registered for XAT 2015. There is no other paper pencil based management entrance test which gets such a high registration in the current scenario.

While number of entrance exams have switched over to computer based testing pattern, XAT 2015 will maintain its paper pen testing pattern. Sharing the logic behind conducting paper pencil based exam. Dr Munish Thakur, Admission Chairperson XLRI and XAT 2015 convener says “XAT ensures that all the candidates from varying backgrounds are at par.  XAT is aimed to select the most appropriate candidates who wish to pursue management education.”

According to Prof Munish Thakur XAT 2015 Convener “The Test will be conducted in a single session across India in 47 cities and 2 cities abroad.  Test duration will be of 3 hours. Exam will have same difficulty level across all the testing centres.” The major USP of XAT 2015 is that the single session test will have same number and type of questions. No difference in the difficulty level would be there. This will have favourable impact in normalization of scores and calculation of percentile for short listing the candidates for final admission round.

Prof Munish Thakur says “We believe that single testing session with same difficulty level will provide level playing field to all the test takers without any discrimination. This will also speed up the process of score normalization.”

Aspirants who have registered and wish to appear in XAT 2015 are expected to find the examination more appealing and in line with their preparation methodology.  Candidates do not have to fight with technical snags and glitches which are a common feature in the computer based test.

Toggle between the sections; be careful

XAT 2015 will not restrict the test takers from moving to one or other sections within the overall allotted time. XAT 2015 aspirants are advised not to spend too much time only on one section since all the sections will have the respective cut off percentile.

XAT 2015 Verbal Ability: Learn how to crack 3 questions on Articles

XAT 2015: Admit card is out; Login to download & take prints

XAT 2015: How to approach 25 questions in Decision Making section