MBAUniverse.com News Desk | :
January 2, 2015
IIM Ahmedabad has declared the shortlist of candidates for Pi round on its site on January 2, 2015 at 4 PM 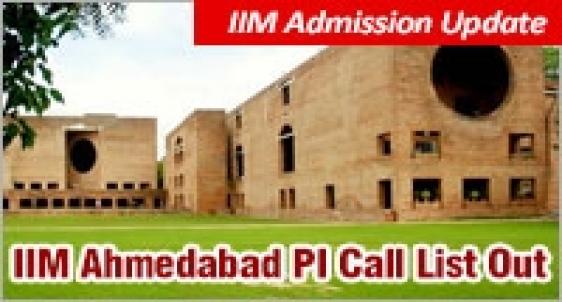 Keeping its promise to make available the shortlist on Jan 2, IIM Ahmedabad has declared the shortlist of candidates for PI round on its site on January 2, 2015 at 4 PM. Candidates who have scored high sectional percentile as well as overall percentile in CAT 2014 and have excellent academic profile have been shortlisted by IIMA for AWT and PI round for admission 2015.

It was already announced by IIM Ahmedabad that the “Short List of candidates to be called for AWT-PI for PGP 2015-17 is likely to be available on January 2, 2015”.  The time to declare the shortlist was not shared earlier. However the shortlist has been declared today around 4 PM.

You need to enter your Test Registration number in the first column as advised by CAT Centre 2014 and mentioned in your CAT 2014 Admit Card.

In the next column you are supposed to enter the CAT 2014 registered mail id. Immediately after entering and clicking on submit button, if you are shortlisted the message will read “You have been short-listed for Academic Writing Test and Personal Interview (AWT-PI) for admission to PGP (2015-2017 batch), IIMA.”

In case you are not shortlisted the message will be “You have not been short-listed for Academic Writing Test and Personal Interview (AWT-PI) for admission to PGP (2015-2017 batch), IIMA.”

1. High sectional and overall percentile in CAT 2014. A general category candidate with percentile of 93 to 100 in each section and approximately 99 overall may hope to have been shortlisted for PI round. But it also has riders.

2. Excellent Academic Profile. A candidate with more than 90% marks in class X and XII and more than 81% in Graduation can hope to have been shortlisted for PI round by IIM Ahmedabad.

The Academic Writing Test and Personal Interview round at IIM Ahmedabad for PGP batch 2015-17 is more crucial than CAT 2014 written exam. In fact you could call it elimination round. Around 8-10 times of candidates will be called for this round and all will be well prepared. Your struggle to get admission offer after converting the call at IIM A will depend upon your clarity of thought, writing style, selection of words and speaking skills to face the PI round.

You should begin practicing on all the weak points now to strengthen them further. Role of PI and WAT is so strong in converting the call that weightage to them is higher than the weightage to CAT 2014 exam scores.  So get ready and don’t miss the opportunity. The process is to begin very shortly.

Stay tuned to MBAUniverse.com for more updates on IIMA admission 2015