MBAUniverse.com News Desk | :
January 3, 2015
IIM Calcutta has declared the shortlisting criteria on the basis of CAT 2014 scores and academic profile of the candidates for next phase of admission round 2015 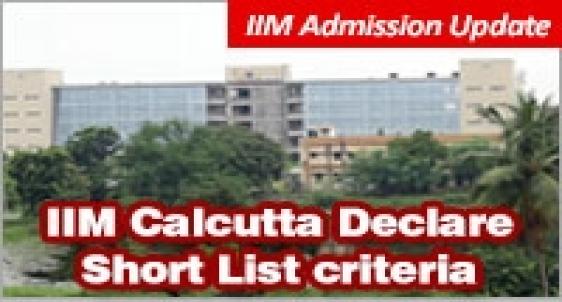 IIM Calcutta has declared the shortlisting criteria on the basis of CAT 2014 scores and academic profile of the candidates for next phase of admission round 2015 consequent upon declaration of CAT 2014 result on Dec 27, 2014. While IIMC awards weightage to high score in X & XII classes, no weightage to graduation score is awarded in shortlisting the candidates for final admission round.

IIMC is expected to declare the shortlist of candidates on January 5, 2015 comprising about 3000+ candidates after going for shortlisting process as per the declared guidelines. However not all the high percentilers with 99+ may get shortlisted by IIMC for final admission round since it is going to follow a different set of parameters that consists of academic profile, gender diversity apart from high sectional as well as overall percentile scores in CAT 2014.

To get the answers whether you are going to be shortlisted by IIMC for final admission round you should be aware about the admission criteria which has CAT 2014 as one of the parameters but is not the only measurement to shortlist the candidate.

How many to get admission in IIMC

IIM C will admit around 400+ students for PGP and other programmes for batch 2015-17 in admission session 2015. On an average 8-10 times candidates are shortlisted by IIM C independently in accordance with its shortlisting criteria.

While CAT 2014 score is the mandatory basic criteria to short list the candidates for Written Ability Test (WAT) and Personal Interview (PI) round, it has many riders.

IIM C expects you to score a high percentile in CAT 2014, overall as well as sectional. You may not be shortlisted despite scoring a very high overall percentile but weak and uneven sectional percentile.

Apart from the high CAT 2014 percentile, if you do not have excellent academic record you may not be shortlisted.

Announcement of shortlist at IIM C

Besides those who have not scored a high balanced percentile in both the sections in CAT 2014 may not expect to be shortlisted by IIMC unless they have excellent academic profile. IIMC is the dream B school for MBA aspirants and especially for those who prefer pursuing PGDM with specialization in finance.

In regard to actual CAT 2014 cut off percentile to be considered for shortlisting the candidates IIMC says “Please note that the actual section-wise and overall percentile for short-listing candidates for PI may be much higher than the above mentioned minimum cut-offs as the short- listing for PI is done on the basis of composite score.”  Hence the actual CAT 2014 Cut off can go well beyond 99+.

Academic Profile
Candidates will be shortlisted for PI stage on the basis of composite scores which will be arrived at by accounting for the academic profile. The Composite Score therefore is calculated on the basis of CAT score, Class X and Class XII aggregate percentages, and gender diversity factor. Method of allotting points for Class X and Class XII percentage is as given below

IIMC will award 3 points to female candidates only to ensure gender diversity while shortlisting the candidates for PI stage.

Formula to arrive at the final score in Shortlisting at IIMC+

IIMC will shortlist the Candidates based on their composite score for the PI stage of selection process comprising Personal Interview (PI) and Written Ability Test (WAT) or any other test decided and pre-announced by IIM Calcutta.

The Indian Institute of Management Calcutta (IIMC) was established as the first national institute for Post-Graduate studies and Research in Management by the Government of India in November 1961 in collaboration with Alfred P. Sloan School of Management (MIT), the Government of West Bengal, The Ford Foundation and Indian industry.  The top rated B school is close on the heels of IIMA in terms of ranking and is one of the most preferred B schools in the country.