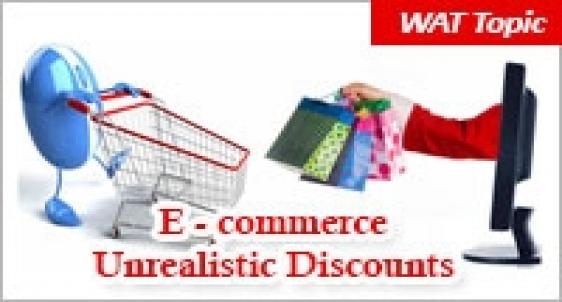 The contemporary and current issues are expected to become the part of WAT topics in final admission round 2015 at IIMS and other top rated B schools. The model essay on one of such topics is shared below. This can help the shortlisted candidates for PI round after declaration of CAT 2014 result to write in the Written Ability Test on the given WAT topic.

Electronic Commerce known as Ecommerce means trading in products or services using computer network like Internet. It is the on-line marketing system instead of physical involvement of intermediaries like wholesalers, retailers before reaching the end user.

E-commerce in India with the internet user base of about 250.2 million as of June 2014 is expanding every day. Although penetration of e-commerce in India is low as compared to markets like the USA and UK but is growing at a much faster rate with a large number of new entrants.

Overall e-commerce market is expected to reach Rs 1,07,800 crores by the year 2015 with both online travel and e-tailing contributing equally. Some of the prominent names in the Indian E-commerce Industry are Flipkart, Jabong, Myntra, Snapdeal, Amazon, eBay, Homeshop18, Tradus etc.

As the E-commerce market in India is small and good number of E-commerce companies available, there is a tough competition among them. For this reason many of the e-tailers have to close or have to change their business model for their survival.

Recently, many of the E-commerce companies have adopted the unrealistic pricing to sell their goods into the market and to attract a large customer base. Under this unrealistic pricing the e-tailers are selling their goods at unexpected high discounts than in any retail store. This is definitely hurting the sale of the retailers who are investing and not meeting their sales target.

Flipkart, an Indian E-commerce giant has offered unrealistic discounts on the Flipkart’s Big Billion Day sale and claimed the business of Rs. 600 crores on that day. Similarly Snapdeal also announced similar sale. These types of unrealistic offers at heavy discounts attract a large mass of people and thereby contribute in the revenue generation of the company.

No doubt the unrealistic pricing is benefitting the organisation and the customers who get the products at a very low price due to heavy discounts. But when the whole system is considered, it is eating up the cash flow into the Indian physical market. With the kind of prices E-commerce Company is offering, it is impossible for retailers to compete.

The economy set up of India is presently running on these physical market rather than E-commerce market as of in USA and UK. Even after such tremendous growth of E-commerce in India, nearly 95 percent of business is still generated by offline retailers. The unrealistic price not only affects the small retailers but also hinders the growth of the Indian economy.

The issue that arises is the warranty and the guarantee on the purchase of the electronics goods through e-tailing. Since the e-commerce companies do not have any physical store as available with the normal retailers where the customers can go and ask for the repair or replacement, the customers sometimes have to face loss also.  Keeping in view the Indian market structure which has 95 per cent of the sales done through physical retail, the unrealistic pricing will deteriorate the retailers and therefore needs to be stopped for the better functioning of the Indian economy.

The excess of everything is harmful. It can be concluded that there should be the growth of e-commerce sector in India as the technology advancement is high. But this should be done in the umbrella of norms and regulations. The controlled e-commerce market will prove a boon to the economy but an uncontrolled market may go berserk and will prove to be a bane that will hinder the growth of country.

WAT Topics 2015: Is "Make in India" a realistic project with China far ahead in manufacturing?

WAT Topic for MBA: Law can be an instrument of social change

Stay tuned to MBAUniverse.com for more updates and solved topics on WAT 2015