MBAUniverse.com News Desk | :
February 3, 2015
No other exam that the first MAHET held in 2014 after the gap of one year could be the preparation guide for MAHCET 2015 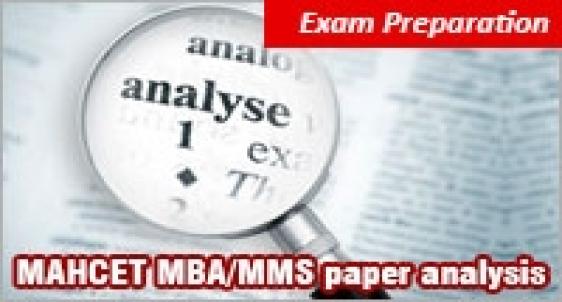 The analysis of MAHCET 2014 exam could guide you well about the key topics needed to be prepared for MAHCET 2015.

More than 42 thousand management aspirants from Maharashtra and around 11 thousand of aspirants from rest of India took the MAHCET-MBA/MMS entrance test on March 15 & 16, 2014 for admission in B schools across Maharashtra.  This was the first MAHCET after a gap of one year as there was no admission test in 2013 conducted by DTE Maharashtra due to legal issues and CMAT played the role of MAHCET in admission 2013. This year MAHCET 2015 is going to be conducted on March 14 & 15, 2015 as a computer based test in online mode. Registration process for MAHCET 2015 with personal profile has already been opened by DTE Maharashtra http://www.mbauniverse.com/article/id/8332/MAH-CET-2015

No other exam that the first MAHET held in 2014 after the gap of one year could be the preparation guide for MAHCET 2015. A quick analysis of last year’s exam can sure pave the way to ace the forthcoming MAHCET 2015. Prof S K Agarwal Verbal Ability expert and mentor on MAHCET exam preparation shares in-depth analysis of MAHCET 2014 with the tips how to prepare and score high in MAHCET 2015.

DTE Maharashtra shared a sample test comprising 95 question on different sections covering the MAHCET 2014. However there were certain questions in Verbal Ability which were not mentioned in the sample paper shared by DTE Maharashtra in its notification, although most of the questions were on the similar pattern and topics. There were a few surprise questions also.

In fact, MAHCET 2015 will be on more or less same pattern as that of year 2014.  MAHCET is divided in 3 sections comprising a total of 200 Multiple Choice Questions (MCQs). The CET will comprise multiple choice objective type questions in the areas of Verbal Ability and Reading Comprehension; Quantitative Aptitude; Logical & Abstract Reasoning.  Each question will carry a weightage of 1 mark. Maximum marks therefore would be 200. The entire test paper has to be answered in a total time of two and half hours (150 minutes).  The analysis of MAHCET 2014 exam could guide you well about the key topics needed to be prepared for MAHCET 2015.

Verbal Ability and Reading Comprehension: What to prepare

MAHCET 2014 had questions to find the first sentence of the paragraph instead of choosing the last sentence of incomplete paragraph. Options were close ones.  Sample paper also didn’t contain questions on jumbled paragraphs which also appeared in the test.

There were two RC passages followed by number of questions including questions like synonyms, antonyms as used in the passage,  the  tone and purpose of the passage, although in a different form. The level of difficulty was moderate but the options were close and time was short.

Questions on error corrections in sentences were similar to the ones as appear in various recruitment examinations of Banks, Insurance companies, Central and state Governments.  Sentences were divided in four sections and the error from one of the sections had to be spotted . If there was no error option 5 had to be marked as answer.

There were questions to fill in the blanks with appropriate words in a short paragraph. With simple and correct understanding of grammar and vocabulary usage, candidates could answer the same well.
Candidates who could get around 30-32 questions correct in this section, improved their overall percentile to a good extent to get admission in one of the top rated B school.

This section in MAHCET 2014 included Analytical Reasoning, Verbal and Non Verbal Reasoning.  Questions on Blood relations, series, arrangements, puzzles were although not very difficult but consumed a lot of time. A good number of questions on Visual reasoning also appeared in the exam. Both types of reasoning taken together, constituted maximum number out of 200 questions.

It is advisable to work on basics of Quant with tips and tricks to solve more questions in less time than working on much higher type of question pattern.

MAHCET scores needed for top rated B schools in Maharashtra

Outside Maharashtra candidates were allotted top rated B schools like JBIMS through DTE Maharashtra Centralized Admission Process (CAP) on the basis of MAHCET 2014 with a score of  around165. Those who scored 145 got SIMSREE while at a score of 135 candidates could get KJ Somaiya followed by PUMBA with 125.  The required score for Maharashtra state candidates was less than this score.

In fact there is an intake of 45000 seats in MBA/MMS course 2015-17, conducted by B schools across Maharashtra. It is expected that about 60 to 70 thousands candidates would appear in MAHCET 2015 to be held on March 14 & 15, 2015 to explore admission opportunity in various B schools in Maharashtra. This gives a high admission ratio to the MBA aspirants in Maharashtra B schools.

Since the ratio of availability of MBA/MMS seats in Maharashtra is very high and many good B schools with moderate fee structure and good placement record exist in Maharashtra, appearing in MAHCET 2015 will sure be a better bet to fulfil twin objectives namely improving the low scores of CAT/XAT and exploring admission opportunity based on MAHCET 2015 scores in good B schools.