MBAUniverse.com News Desk | :
February 4, 2015
Dramatic presentation of real PI account at FMS and the subsequent tips will enable the candidates to know how they can improve further 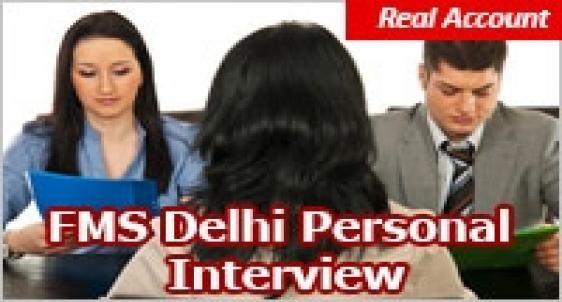 FMS Delhi is about to declare the shortlist for PI round 2015 for its flagship MBA 2015-17 programme. The candidates would then soon be called for the Personal interview in the months of February/March 2015.

Extempore implies expressing views on a topic without any preparation. Accordingly during the Personal Interview round candidates will be given a topic on which they will have to express their views without any pre preparation. The extempore speech round in the middle of PI round may last for 2-3 minutes. To score maximum in extempore the candidate has to organize the thoughts before speaking and should not go wayward as it will give the impression that you are trying to befool the panelists by passing the time only.

This dramatic presentation of real PI account at FMS and the subsequent tips will enable the candidates to know how they can improve further and will help them to boost their confidence level. Name of the candidate has been changed to protect his identity.

Alok is a B tech in Computer science from a good engineering college, although not from any IIT or REC. He has a consistently good academic background to his credit. Alok belongs to a simple middle class family and his father has a small business in Western Uttar Pradesh. Alok is full of confidence and has 1 year working experience with a software company. He however, feels a little nervous while going to appear for interview.
Candidate’s personality

Alok is a slim & smart guy of average height with wheatish complexion. Alok is wearing trousers, tucked in shirt, and a matching tie. Since it is the month of June, he has not put on a coat as it is too warm. Candidates who prefer wearing coat should wear the same just before entering the interview room. His black shoes are not new but he took time to polish them well. His reporting time is 11 AM at FMS Delhi and he ensures to be there 15 minutes before the scheduled time.

Verification of documents before PI session

Immediately after reporting, the verification of his documents was carried out. According to Alok the document verification part was more convenient than in many B schools. He carried 1 set of photocopies to be on safe side along with his original documents. There were 4-5 seniors present all the time at the venue and were open to talk to clear any doubts including college comparisons.

Alok was the 3rd candidate to be called for interview at the scheduled time. The board comprised 4 panelists; 2 male and 2 female.

Alok enters the room after politely asking for the permission from the panelists. He greets the panel members bidding them good morning with a smile. The female panelist sitting in the middle asks him to take the seat which he does, not forgetting to convey note of thanks to the panelist

Alok: Sir, I arrived here even before 11. Probably some extra time was spent in verification of documents. I wish I could be in the room at 11 AM.

P1: OK we know it’s not your mistake. I find you are perspiring. Are you feeling nervous?

Alok: Sir, Honestly speaking a little since it is my first interview for admission to FMS

P1: Be comfortable and just relax. Have a glass of water.

Alok: Thank you Sir, I am comfortable now.

P1: Tell us about your back ground

Alok: Sir, I come from a simple middle class family. My father runs a small business. My mother is a home maker. I have been a consistently good student although never topped the school or college. After completing my B.Tech I worked in a company at Trivandrum and then at Noida.

P2: When did you complete your graduation?

P2: What have you been doing since then?

Alok: Madam, as shared earlier I worked with a company in Trivandrum and then in Noida.

P2: Why did you leave the job in Trivandrum and came to Noida?

Alok: Madam, there were two factors that influenced my decision. The first one was that I was offered a better role with better package and the second was that Noida is nearer to my native place and I can visit my parents more frequently as coming from Trivandrum took more time.

P3: Alok, you will now be given a topic for extempore speech. You will have 10 seconds to think on the topic after which you are required to speak on.

P3: The topic is ‘Modelling- how good for society’

Alok: ( after thinking for a few seconds began to speak and continued his speech for over a minute detailing various positive and negative aspects of modeling; its application in fashion designing; software industry)

P3: Please stop now.
(Alok stops and looks on curiously for next question)

Alok: Sir, Dr Raghuram G Rajan, the Governor of RBI heads it. Reserve Bank of India is the monetary authority of the country. It controls money supply, banking system of the country. The major control tools available with RBI are Bank rate, CRR, SLR.

P4: Please tell us the names of female cabinet ministers in the Government at Centre.

P4: Is that all? Have you missed someone?

Alok: I am trying to recall…

P4: OK I will help you. There are three more – Madam Nazma Heptullah, Maneka Gandhi and Harsimrat Kaur.

Alok: Thank you Madam (P4 smiles)
(P4 then asked a few questions on Software development process, which Alok answered well and at some points P4 looked as if not convinced)

P4: What other calls did you get? How many of them stand converted?

Alok: Madam, I got calls from IIM Shillong, New IIMs, MDI, IMT, NITIE. I converted New IIMs and NITIE and am waitlisted at IIMS and MDI.

P4: Do you have any question to ask?

P4: Thank you Alok for interacting with us.

Alok: Thank you madam and Sirs for providing me a nice session with learning.
(Alok gets up smartly without making chair sound and leaves the room)

Feedback – The personal interview with extempore continued for 12 minutes. Alok answered almost all the questions precisely and has a positive approach with good subject knowledge. He has a vision for future as well.  He was a little nervous in the beginning but became quite confident during the course of interaction.

Do’s and Don’ts for PI round at FMS

1. Please report at least 15-20 minutes before the scheduled time

2. The process of document verification is smooth, easy but may take some time. Seniors are available to help you all the time at the venue so be cooperative.

3. Along with originals take 1 set of photocopies

4. The Personal Interview round at FMS could be in before or afternoon session.

5. During the PI there will be an Extempore Speaking session not exceeding 2 minutes. 10 seconds will be given to think on the topic and then candidate has to begin speaking. Practice on multiple topics.

6. The weightage for different components in final admission round at FMS in 2014 was as under – CAT percentile-85%; Extempore speech-5%; PI-10%,  prepare to score high in PI as it will give you an edge.

Stay tuned to MBAUniverse.com for more updates on FMS PI 2015