MBAUniverse.com News Desk | :
February 17, 2015
FMS, Delhi has issued notice to 54 MBA aspirants who have applied for admission 2015 to provide their Correct CAT Registration ID to FMS by February 17, 2015 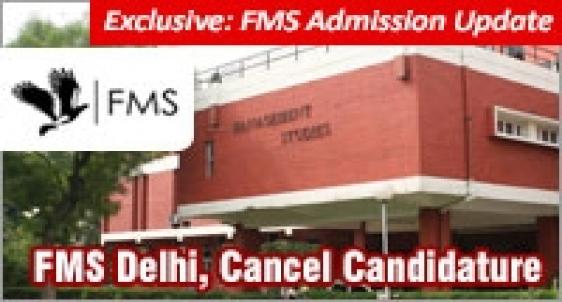 "In case, we do not receive your correct CAT Registration ID by 17.02.2015, your candidature for Admission to MBA Programme will not be considered"- FMS Delhi

Faculty of Management Studies (FMS) Delhi University has issued notice in public domain to 54 MBA aspirants who have applied for admission 2015 to provide their Correct CAT Registration ID to FMS by February 17, 2015 so that their CAT Score can be obtained from IIM, Indore to consider their candidature for Admission to MBA Programme.

MBA admission 2015 process at FMS Delhi has been stuck as these candidates have either not  provided the CAT 2014 registration ID or have provided wrong ID due to which FMS has not been able to retrieve the scores obtained by these candidates in CAT 2014.

After waiting for long, FMS has issued notice to these 54 students stating “In case, we do not receive your correct CAT Registration ID by 17.02.2015, your candidature for Admission to MBA Programme will not be considered”. Accordingly today is the last day for these 54 candidates to submit their correct CAT 2014 registration ID or face the cancellation of candidature for admission in MBA 2015-17 batch.

Declaration of shortlist consisting of more than 2000 candidates by FMS Delhi is delayed due to non receipt of scores of such candidates who have not furnished correct CAT 2014 registration ID.  Dr M L Singla Dean FMS has been hopeful to get the CAT 2014 scores of all the applicants very early so that the shortlist could be declared. According to him “We are in the process of receiving the CAT score of the applicants and will be announcing the cut-off sometime soon”.

It is surprising to note how the candidates desirous of seeking admission to MBA 2015-17 batch at FMS Delhi could be so oblivious of this basic requirement.

The B school therefore does not propose to eliminate the candidates on the basis of uneven and low CAT 2014 sectional percentile from the shortlist process. The expected CAT 2014 cut off percentile at FMS Delhi in the shortlist may go beyond 98 for MBA admission 2015.

FMS Delhi is at the final stage of declaration of shortlist of candidates and it is expected that the shortlist will be declared in a week’s time. The next stage of admission round at FMS comprising extempore speech and personal interview is proposed to begin in the month of March 2015. Group Discussion (GD) as per the FMS admission selection process 2015 does not form part of final admission round.