CAT 2015: Know all Insights of Last year exam with Experts view to plan you preparation

MBAUniverse.com News Desk | :
March 17, 2015
CAT 2015 is expected to follow the newly adopted pattern of CAT 2014 although there could be a few minor changes 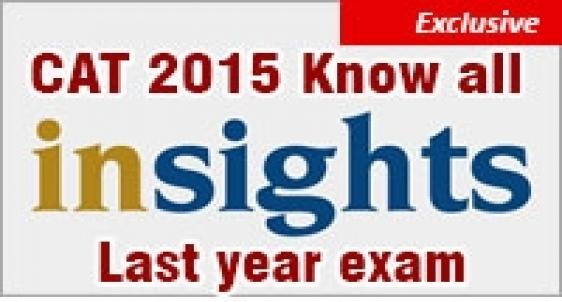 CAT 2015, the most coveted B-school entrance examination would need hardcore in-depth preparation, where nothing can be left to chance

Common Admission Test, more commonly known as CAT is the most sought after entrance examination to pursue MBA/PGDM in IIMs and other top rated MBA colleges in India. IIMs, FMS, MDI, NITIE, Management departments of IITs, JBIMS have made CAT a mandatory exam for admission to their management programmes for the batch 2016-18.

Based on his deep insight and analysis of changed face of CAT 2014, Prof S K Agarwal Verbal Ability expert and mentor on CAT 2015 preparation suggests the CAT 2015 aspirants to come out of their cozy and easy going mode and must fasten their belts to prepare with determination to crack CAT 2015 with high sectional as well as overall percentile.

CAT is a yearly examination conducted by Indian Institutes of Management usually in the months of October-November.

CAT 2015 is to be conducted by IIM Ahmedabad while the testing agency TCS will remain in the saddle.

CAT 2014 brought significant changes in the duration of testing window reducing it from 21 days to only 2 days; increasing the number of questions from 60 to 100; doing away with the sectional time constraint and allowing the test takers to toggle between the 2 sections freely; increasing the total test time from 140 minutes to 170 minutes but reducing the time available to solve per question from 2.32 minutes to 1.80 minutes.

Despite all these changes CAT 2014 was a grand success under the convenorship of Dr Rohit Kapoor, faculty at IIM Indore.

CAT 2015 is expected to follow the newly adopted pattern of CAT 2014 although there could be a few minor changes like duration of testing window, type of questions.

MBAUniverse.com brings out an overview on CAT 2015 with key facts to enable you to plan and start the preparation journey accordingly.

The best talent of country aspires for IIMs which are highly ranked in imparting management education. There are around 2 lakh candidates who go for CAT preparation to appear in this most coveted test every year. Return on investment at IIMs is probably the best. Two years fee and other expenses at IIM come to around Rs.15 to 20 lakhs.  Top recruiters from India and world eye these institutes for their placement season and feel proud when a few of the students from these B schools join them. The offered salary packages go as high as Rs.50 to 55 lakhs per annum to the students of these institutes. Govt of India has added 6 new IIMs from the academic session 2015-16 making a total tally of IIMs to 19.

MBA aspirants who wish to prepare for CAT 2015 to get admission in top rated B school have to keep in mind the different parameters adopted by IIMs and other highly ranked B schools.

IIMs would need high sectional as well as overall CAT 2015 scores. Other B schools like FMS, SPJIMR, IMT, MDI would consider overall CAT 2015 percentile although candidates should score fairly good score in each of the 2 sections of CAT 2015 exam.

IIMs required minimum 85-90 percentile in each of the 2 sections and due to this fact many candidates despite scoring overall high percentile in CAT 2014 were not able to get shortlisted by IIMs while other B schools have shortlisted them for final admission round.

For example, the candidate scoring 99+ percentile in Quant and 78+ in Verbal with overall percentile of 98 in CAT 2014, he was not shortlisted by IIMs although FMS, SPJIMR and other top rated B schools shortlisted him for PI round.

Going by the changes brought about in CAT 2014, notification to CAT 2015 is expected in the last week of July 2015 in leading newspapers and website of IIMs as well as on MBAUniverse.com portal. The test is expected to be conducted in 1 or 2 day test window in the months of October-November 2015.

Since 2014 CAT application process has been further simplified. Candidates can now register, apply online and can make online payment of the requisite fee without wasting time by going to the designated Bank to purchase the CAT vouchers which are sometimes out of stock.

Common Admission Test (CAT) conducted by Indian Institutes of Management will be a computer based test. CAT 2015 organizing IIM Ahmedabad will provide a practice test beforehand to familiarise the candidates about the type and pattern of the test.

CAT 2015 is expected to have total time duration of 170 minutes on the similar lines of CAT 2014. The exam is proposed to be divided in two sections without any time constraint since CAT 2014. Candidates would be allowed to switch from one section to other during the overall time limit of 170 minutes. Till CAT 2013 the test had sectional time constraint of 70 minutes each. However the CAT 2015 taker will have to ensure also that not too much time is wasted only on one section as sectional high score is also very important to get shortlisted by an IIM.

Describing the CAT 2015 preparation strategy, Prof S K Agarwal, mentor and expert on verbal ability, shares that an aspirant needs to know what and how to prepare before moving on the tricky path of CAT preparation module. CAT 2015 aspirants should come out of their cozy and easy going mode and must fasten their belts to prepare with determination to crack CAT 2015 with high sectional as well as overall percentile.

Make a mix of types of preparation

In view of Prof S K Agarwal expert on Verbal Ability and mentor on CAT 2015 preparation while the strategy on how to prepare for CAT may differ from person to person, meticulous self study has no substitute.  Most of the candidates coming from Engineering or other technical background find it easy to get along well with Quant, DI and LR but when it comes to Verbal Ability and Reading Comprehension, they find the section too difficult.

Self Preparation is the best preparation strategy for CAT 2015 however time is also an important factor. If a candidate gets stuck on some question due to his/her lack of conceptual clarity, the wastage of time is more and depression begins to set in. It could be a small quant formula, LR logic, or Verbal usage clarity which might need a simple push to come out of the shallow waters. This help can be provided by your mentor online or offline depending upon your preference or a mix of both.

Another fact in CAT 2015 preparation journey is the difficulty level which is more wanting. The quest for speed and accuracy has increased- a challenge which is to be met by the examinees. Till CAT 2013 the test taker had 2.32 minutes per question to solve but since CAT 2014 the time is reduced to 1.8 minute per question to solve.

The four parts of CAT namely Quantitative Aptitude, Data Interpretation, Verbal Ability and logical reasoning need a systematic study schedule. Looking at the level of difficulty and surprise elements that appeared in CAT 2014 examination, a thorough preparation of 6 to 7 months will be required to crack CAT 2015.

Please remember CAT 2015, the most coveted B-school entrance examination would need hardcore in-depth preparation, where nothing can be left to chance. Don’t wait begin your preparation now.