MBAUniverse.com News Desk | :
March 19, 2015
It appears that FMS Delhi is going to declare the shortlist and begin admission process after other top B schools close their PI round 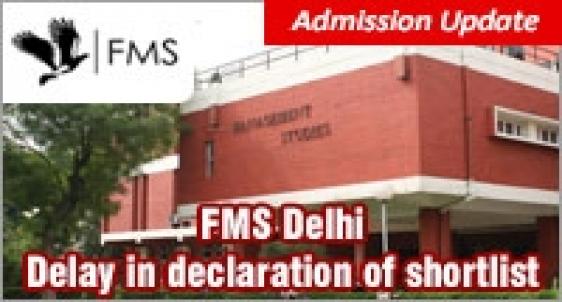 FMS Delhi accepts only CAT scores for admission to its MBA programme therefore there is no other exam the result of which is awaited by FMS to declare its shortlist of candidates.

Even after the declaration of shortlist and finalization of the admission process by IIMs and other top B schools, Faculty of Management Studies (FMS), University of Delhi one of the top rated MBA colleges in the country has not been able to declare the shortlist of candidates for MBA final admission round 2015. FMS has the lowest fee structure and very high placement packages offered year after year among the top rated B schools of the country including all the IIMs and this fact is the key attraction for the candidates searching admission opportunity to FMS Delhi.

It appears that FMS Delhi is going to declare the shortlist and begin admission process after other top B schools close their PI round. This is based on the fact that FMS Delhi accepts only CAT scores for admission to its MBA programme therefore there is no other exam the result of which is awaited by FMS to declare its shortlist of candidates.

FMS Delhi, the high ROI B school stood among the top B schools including top rated IIMs that used to declare the shortlist of candidates immediately after the announcement of CAT results till 2013. In 2014 probably due to some disturbance on account of General Election 2014 FMS Delhi delayed the declaration of shortlist. But it is surprising to note that despite early declaration of CAT 2014 result on Dec 27, 2014 instead of earlier declarations in the second week of January, FMS Delhi is still contemplating on the idea when to declare the shortlist.

All the older IIMs namely Ahmedabad, Calcutta, Bangalore, Lucknow, Indore, Kozhikode and Shillong and all the 6 new IIMs declared the shortlist very much in the month of January/ February 2015 after declaration of CAT 2014 result. These B schools are on the verge of completing their admission process and will shortly offer admission letters to their prospective students for the batch 2015-17.

Not only this XLRI, SPJIMR, MDI, NITIE and many other highly ranked B schools have almost completed their admission process. On the other hand, FMS Delhi is still lingering on and taking time to declare the short list.  There is not even any indication when the B school plans to declare the same.

Delay in declaration of shortlist at FMS Delhi for MBA 2015-17 batch is causing anxiety among the MBA aspirants who wish to pursue MBA from this high ROI B school. The admission opportunities in top B schools might be over by the time FMS declares the shortlist. Not getting ready to get indulged in such dilemma of uncertainty in admission, the CAT 2014 high percentilers might accept admission offers from other B schools. In case they are shortlisted by FMS also, they may or may not proceed and participate in the admission process at FMS given the fact that brand IIM commands a high reputation in management education. This anomaly might compel FMS to compromise on quality of stuff also.

The aspirants are now raising queries and searching various sites to know when FMS would be declaring the shortlist soon. FMS is supposed to shortlist around 2500 candidates for next phase of interview round for an intake of 200 students in MBA full time programme in 2015. Since neither the shortlist is declared nor the date for the same is shared, candidates are worried whether there would be as long a delay as happened in 2014.

The principal difference in shortlisting criteria between IIMs and FMS is while IIMs are more concerned on high balanced sectional as well as overall percentile, the major consideration at FMS is overall percentile. The candidates who were not shortlisted by IIMs despite scoring high overall percentile in CAT 2014 can find a place in FMS shortlist in admission session 2015-16.

Faculty of Management Studies (FMS) Delhi University issued notice in public domain to 54 MBA aspirants who have applied for admission 2015 to provide their Correct CAT 2014 Registration ID to FMS by February 17, 2015 and later extended this date till March 3, 2015 so that their CAT Score can be obtained from IIM, Indore to consider their candidature for Admission to MBA Programme. However, not many of them provided the correct CAT 2014 ID to FMS as a list of 47 candidates who have not submitted CAT ID is still there on FMS site. Issuing the final Notice to these candidates FMS has warned “This is the last opportunity given to these students to provide their correct CAT ID by March 3, 2015, failing which they will not be considered for Admission in MBA Programme.”

It has been more than 15 days from the lapse of last date allowed by FMS to submit the CAT ID. In case these candidates still fail to submit their CAT 2014 ID, would FMS Delhi continue waiting for the same or would declare the shortlist at the earliest, remains to be a big question.

It has been given to understand from reliable sources that FMS may not wait much longer and would proceed to declare the shortlist to avoid any delay in finalizing the admission process and commence the session on time.