MBAUniverse.com News Desk | :
March 27, 2015
IIM Bill 2015 which has already been placed before the Cabinet is proposed to be introduced in latter half of the Budget session 2015-16 by Ministry of HRD 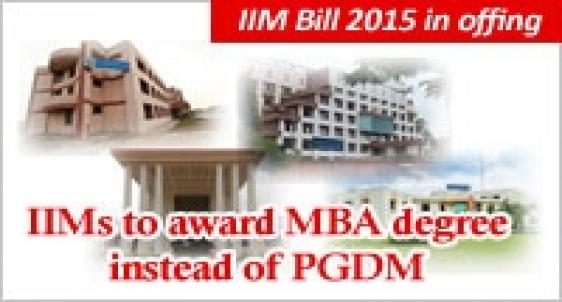 The move may jeopardize the creditability of PGDM programmes offered by top Private B schools in the country, unless they are also provided the opportunity to award MBA degree

Sure that long cherished dream of IIM passing out students to get MBA from their IIM, making it globally acceptable without getting supported with a parallel certificate is going to come true with the IIM Act 2015, the Bill of which is going to be introduced shortly in Parliament; the proposed bill may create problems for top private B schools offering PGDM programmes which are highly rated and well accepted.

The IIM Bill 2015 which has already been placed before the Cabinet is proposed to be introduced in latter half of the Budget session 2015-16 by Ministry of HRD with the aim to empower all the IIMs to award MBA degree instead of Diploma in Management.

Keeping their autonomous status at the prime place, IIMs are neither affiliated to any University nor have been declared a deemed to be university and hence cannot award MBA degree as of now. The bill, if introduced and passed in parliament will become IIM Act 2015 and will benefit 4500 students of  20 IIMs (13 present and 7 proposed) every year as their students will be bestowed with an IIM-MBA degree instead of Diploma.

However, the move may jeopardize the creditability of PGDM programmes offered by top Private B schools in the country, unless they are also provided the opportunity to award MBA degree to their passing out students.

None of the present 13 Indian Institutes of Management (IIMs) shortly going to be 20 in number awards a Masters degree in Business Administration (MBA). All the IIMs award Post Graduate Diploma in Management (PGDM) and alongwith this diploma they issue a certificate that their PGDM programme is equivalent to an MBA degree to enable the passing out student to seek admission abroad in doctoral programme or apply for a job.

Despite one of the most sought after management programmes PGDM at IIMs without the supporting certificate lacks its International recognition.

For the last few years, Ministry of HRD, Govt of India has been contemplating the idea of introducing the most awaited IIM Bill in Parliament to enable IIMs to award MBA degree instead of Diploma to passing out students. The statutory requirement will be to form a council on the lines of the council for IITs to oversee the functioning of IIMs.

IIMs despite welcoming the move are afraid of losing their autonomy to some extent due to the application of this Bill. The sources shared that IIM Ahmedabad has not been in favour of such a bill in the past due to which it remained suspended. Before making IIM Bill 2015 the IIM Act 2015, it has been decided that IIM council would be different from IIT council and as such it will function as coordination forum not disturbing the autonomy of IIMs to a great extent.

Formation of IIM council would change the institutes into statutory bodies to offer masters' degrees and doctorates, instead of diplomas and fellowships. Since degrees can be awarded only by universities and institutes such as Indian Institutes of Technology (IITs), set up by an act of Parliament or state legislatures, and those declared deemed-to-be-universities under the UGC Act, IIMs cannot award degrees, as they have been set up as societies, under the Societies Registration Act.

IIMs in favour of autonomy

IIMs are in favour of the bill but want the council to have low representation of bureaucrats and greater representation of industry, acamidicians and IIM officials. The idea of forming a council for IIMs was proposed by the IIM Review committee in 2009 led by Mr R C Bhargava Chairman Maruti Udyog Ltd .  In view Mr Bhargava“A certain degree of coordination is required in what the IIMs are doing. And, as IIMs provide managers, I think periodically, some outside inputs are required for IIMs to ensure they are up-to-date with the environment changes in India, so that education in IIMs is consistent with what is required for our national goals”

Disruption in formation of IIM Society could prove detrimental to IIM autonomy. Accordingly the older IIMs with large and influential alumni base like IIM Ahmedabad, Bangalore, Calcutta, Lucknow and others are not in favour of dissolving their societies as they have their alumni and donors who have been accommodated in the societies. IIMs wouldn’t like to disrupt the formation and have requested the MHRD to retain it in the IIM Bill 2015.

Undoubtedly the quality of education and placement at IIMs matter more than degrees but an MBA degree from IIM would sure help the IIM students in pursuing higher studies abroad.

The IIM Bill 2015, if becomes the IIM Act 2015 after getting nod from Parliament, will help the passing out IIM students with MBA degrees to apply for jobs and doctoral programmes abroad without further convincing the foreign University regarding the authenticity of their MBA Programme. Besides an MBA degree will help them to apply for government jobs and pursue higher education at their preferred Institute or University anywhere in the world.

The move by the Government to introduce the IIM Bill 2015 is no doubt laudable for IIM students but it may adversely impact the PGDM programmes of top Private B schools which are at par with top rated older IIMs.

The IIM Bill 2015 if passed and becomes IIM ACT 2015 may put a question mark on highly rated PGDM programmes of top private B schools like XLRI, SPJIMR, MDI, BIMTECH, IMT, TAPMI and many more. It will create unfavourable situation putting the market validity of their PGDM programmes at loss. These B schools sustain on the basis of quality education they impart, have large alumni base and  keep the flag flying without any Government aid & funds. It will be in the fitness of things that Ministry of HRD should also evolve the process of empowering these Private B schools by providing level playing field with IIMs so that they may also award MBA degree to their passing out students.