MBAUniverse.com News Desk | :
April 6, 2015
DTE despite knowing the unfair treatment met out to slot-1, 3 & 4 candidates, has not agreed to conduct re-exam nor has come forward with justified methodology to solve the problem 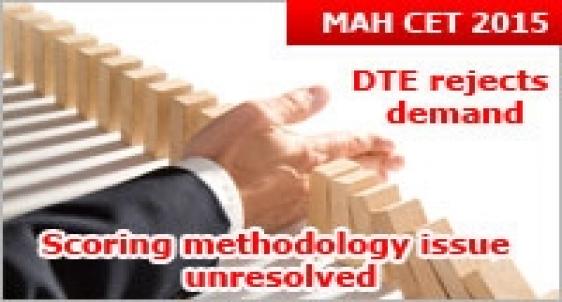 Unable to resolve faulty calculation of percentile issue in MAHCET 2015 exam for admission to MBA/MMS 2015-17, the Directorate of Technical Education (DTE) despite knowing the unfair treatment met out to slot-1, 3 & 4 candidates, has not agreed to conduct re-exam nor has come forward with justified methodology to solve the problem affecting future of 57000+ test takers.

With the declaration of MAHCET 2015 results, DTE Maharashtra which should have been gearing up for Centralized Admission Process (CAP) the dates of which are to be announced, is still trying to fight out the issue of equi-percentile which has cast a shadow on the future of thousands of candidates.

Admission to 2015-17 batch of MBA/MMS/PGDM programmes in Maharashtra B schools for Maharashtra domicile as well as for outside Maharashtra candidates will be through CAP 2015 only. DTE may not be able to announce the CAP dates till the issue of awarding varying percentile with a process not acceptable to many students, including the nephew of Maharashtra Education Minister, is resolved.

Back drop of conflict

MAHCET 2015 exam was conducted by DTE Maharashtra on March 14 & 15, 2015 in 4 sessions and the result was declared on March 25, 2015. However, due to number of technical problems and erroneous questions that appeared in MAHCET 2015, thousands of test takers are not satisfied with the result as they find the equi-percentile method adopted by DTE Maharashtra faulty and not doing justice to the candidates who appeared in slot-1, 3 & 4. DTE based the percentile calculation on slot-2 due to which test takers feel that they have been deceived and therefore are demanding re-exam.

There is no doubt that Directorate of Technical Education (DTE) has not taken MAHCET 2015 seriously enough and the casual approach in conduct of test has caused so much furore and panic among the test takers after declaration of result.

According to the dissatisfied group of test takers while the Director of JBIMS agrees that injustice has been done to many students but it is DTE Maharashtra that has to take final decision safeguarding the students’ interests without putting the reputation of MAHCET 2015 exam at stake. Test takers are demanding either the re-testing of MAHCET 2015 without any erroneous question types in the re-test or some satisfactory formula that shouldn’t do any injustice to the test takers.

Unless the decision is promptly taken on the burning issue by DTE Maharashtra, the dates for Centralized Admission Process (CAP) 2015 may not be announced as of now.

Test takers in MAHCET 2015 have highlighted following multiple problems that occurred in the conduct of exam on March 14 & 15, 2015

• Half printed questions in Question paper.

• Number of correct options were same/missing

• There were few cases of mass copying also reported by candidates.

• There was no proper check in process (finger printing, photo identification)

The avoidable problems highlighted by the test takers have put the credibility of the exam at stake and on the top of it future of test takers has also been put in jeopardy.

Discrepancies in Result: Crux of problem

Approaching MBAUniverse.com time and again and sharing the DTE documents with discrepancies in scores, the test takers are of the view ‘As the exam conducted in pathetic manner so the result process is. They (DTE) have applied standardized equi-percentile method for final score calculation which have resulted in adverse consequences. Test takers are also perturbed on the ground that there were no predefined parameters adopted which could take care of difficulty level across the slots. In their view  entire exam was presented without prior proof reading and Pre-testing.

When actual score is same (taken as 100) the difference in percentile is 27.97

DTE unable to resolve the issue

Despite having meeting with DTE Director Dr Subhash Mahajan and JBIMS Director, the MAHCET 2015 test takers could not get any definite solution to their grievances and as such DTE has not yet come out with any solution and has been denying conduct of retest. On the contrary DTE has asked the test takers to come forward with alternate solutions other than Re-exam.

This is surprising because when there is any problem even in the test paper of any top level exam like civil services, the commission keeps back-up tests and promptly announces re-exam without any delay. DTE can also follow suit. Future of 57000 test takers is more important than the time & expenses involved in the exam.

To get their problems solved, MAHCET 2015 test takers were left with no alternate but to meet the higher and technical education minister Vinod Tawde, apprising him with their concern and requesting for re-exam. The delegation of test takers included the minister's nephew, Parth Tawde who is also adversely affected. According to Parth Tawde, at some centres students were allowed cell phones, the invigilation was weak. If these students are getting an unfair advantage over students who have really studied hard for the last one year, it needs to be addressed.

Maharashtra Education Minister has assured the candidates that justice would be done to all the test takers.

Despite tall claims by DTE Maharashtra that fair play and level playing field has been provided to all the test takers, the test conducting authority has not shared which questions in each session were not included for evaluation and what was the problem in that question. According to the affected candidates Normalisation process should be made transparent, detailed findings of the expert panel should be made public.

How the DTE proposes to resolve issues like technical glitches, mass copying at some centres, server crashes without conducting re-exam is yet to be seen.

According to the test takers the fair way to calculate percentile was to do it on the basis of marks obtained out of 200. But what DTE did is they applied some interpolation method taking scores of slot 2 as base and calculated equated score and then percentile based on equated score. This created a huge difference for slot 1 candidates.

Highly dissatisfied with the methodology adopted by DTE Maharashtra in MAHCET 2015 declaration of percentile across sessions, the test takers are now worried about their future as they think despite high scores but lower percentiles, their admission to top B schools like JBIMS, SIMSREE, KJ Somaiya, PUMBA among others may not materialize. DTE Maharashtra should look into the matter, take cognizance of the problem and should come out with the formula which is transparent and acceptable to all the test takers.

MAHCET 2015: 2 days to go; last chance to get into top B school; Know the tips to score high