MBAUniverse.com News Desk | :
April 9, 2015
The PI round at FMS will consist of Extempore and Personal Interview and the interview process is preceded by 'Extempore' speech of 2-3 minutes 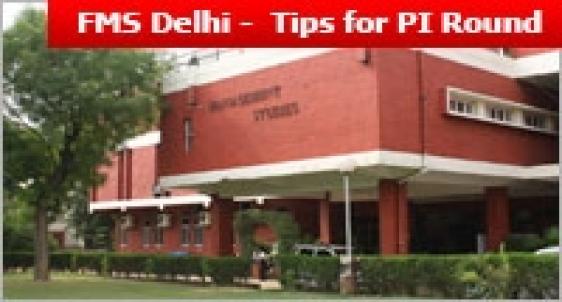 FMS is one of the very few institutes where GD/PI round is held only at one place that is FMS, North Campus, University of Delhi, Delhi. All candidates are required to come to Delhi to attend the interviews. Short-listed candidates come from all over India as FMS has no reservation for any seat for residents or students of Delhi or Delhi University.

The final selection at FMS Delhi will be based on the cumulative performance of the candidate in the CAT 2014 Score as well as the score in PI round.

Components of PI at FMS Delhi
The personal Interview (PI) round at FMS will consist of Extempore and Personal Interview and the individual interview process is preceded by ‘Extempore’ speech of 2-3 minutes. There is no syllabus or rules to choose a topic. The Chair decides who among the panel will announce a topic on the spot. No thinking time is allowed, and the speech is to be delivered before the panelists.

If the candidate is not comfortable with the topic, an alternate topic can also be announced with no penalty. Next part is Personal Interview which may last from 12 to 20 minutes depending upon the quality of your responses.

Extempore: Aim for full marks
Making good use of the opportunity in ‘Extempore’ depends upon the speaking style, thought process and content. The extempore is used as a very distinguishing feature of FMS selection process. Weightage to extempore is 5% on a scale of 100 and scoring full 5 is not difficult also.

One of the senior faculty members and panellist in FMS admission process emphasizes the importance of extempore by saying ‘other than the fluency of articulation, choice of words, panelists look for evidence of a creative mind and capacity to think on one's feet.’ In order to be sure about the 'quality' of the candidate, panel might even give a second extempore topic.

PI: Relaxed but most important process
The Personal Interview process at FMS is relaxed, short and easy going. The members in the interview panel mostly behave in an informal manner. They hardly ever check any testimonials or documents. The panel makes assessment of the candidate on the basis of his awareness and way of response. On a scale of 100 PI has a weightage of 10 marks which is very important to convert the call.

It is advisable to be aware of your surroundings, subject knowledge and avoid replying with any misleading or superfluous answers which may make any adverse impact on the panellists and may put your chances of admission in jeopardy.

Expert and panellist at FMS consistently associated with PI round share that each candidate is actually carefully assessed by using years of experience in sitting through such interviews. Hence any bluff can be well judged by the panellists.

Avoid parrot fashion responses
Coached responses do more harm than good at PI round, avoid them. Most of the 'coached' responses or behaviors are viewed as ‘acting’ which jeopardize your chance to be at FMS. All charms wear off when an amateur actor appears as a poor caricature of someone else

The panel is essentially looking for 'quality of thought process' and 'natural leadership behavior' any artificial or mugged up participation will draw negative attention and fail to impress the assessors who are well experienced.

Be relaxed
Avoid getting worried about extempore. Knowing extempore topics given to other candidates do not help much as the Extempore topics are not repeated. Similarly in PI session if you know the answer, respond well and respond in precise manner. If you have forgot and can recall, well and good else saying that you have forgot or you do not know the answer can be of help.

But in any case do not get panicky, irritating and never lose your cool. Not knowing the answer may not do any harm but losing your cool can sure do.

Most of the times the PI begins either with the 'views' expressed during the 'extempore' or with a discussion around one's bio-data given in the application form. So focus on them

There could be a few questions on one's academic background to assess the depth and accuracy of knowledge. So be good in them

As a regular reader of newspaper you are supposed to know the answers of questions on General Awareness.

Please remember subsequent questions always follow from your previous responses of the candidate. Avoid long and unwarranted string of answers.

Candidates do not get enough chance to contribute at the short-duration, high-traffic group discussion due to which it has been removed from the PI round. A candidate can easily compensate in this individual process by showing his knowledge domain and grab the admission opportunity.