IIM Visakhapatnam intake reduced; Only 45 to get admission in MBA/PGP 2015; session to begin in Aug

MBAUniverse.com News Desk | :
May 13, 2015
IIM Visakhapatnam is expected to commence its maiden PGP (MBA) programme in August 2015 with not more than 45 students as compared to IIM Nagpur & IIM Amritsar with 60 students each 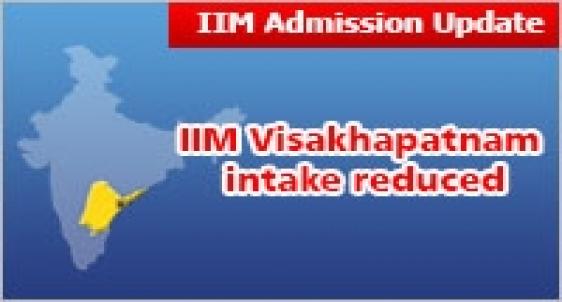 IIM Visakhapatnam is stated to be the 14th IIM in the IIM family but with lack of infrastructural facilities, this IIM may not begin operation with its assigned intake of 60 students

Indian Institute of Management (IIM) Visakhapatnam is expected to commence its maiden PGP (MBA) programme in August 2015 with not more than 45 students as compared to IIM Nagpur & IIM Amritsar with 60 students each.

The reason behind the proposed reduction in intake for the first session which may deprive 15-20 students of their legitimate MBA admission opportunity at the IIM Visakhapatnam, is stated to be due to the lack of infrastructure facilities.

Since IIM Visakhapatnam has to commence operation from the temporary premises allotted to it at Andhra University campus, it is feared that the lack of hostel accommodation for students, faculty, computer labs, and class rooms may not allow the IIM to go for regular intake of 60 students assigned to it. Neither the Andhra University nor the mentor IIM Bangalore has been able to add and augment the desired facilities.

No fault of 15-20 students losing admission at IIMV

For none of their fault, 15 to 20 MBA aspirants hoping to get admission in IIM Visakhapatnam may lose the opportunity to pursue MBA from the premier B school. This is surprising enough as IIM Visakhapatnam is the first among the 6 proposed IIMs whose temporary and permanent campuses were finalized. IIM Visakhapatnam is stated to be the 14th IIM in the IIM family but with lack of infrastructural facilities, this IIM may not begin operation with its assigned intake of 60 students.

Ironically, while the location for other proposed IIMs has either only been announced or the stake holder teams are still searching for their sites, the foundation stone for the permanent campus of IIM-Visakhapatnam at Gambheeram village in Andhra Pradesh was laid by Union HRD Minister Smriti Irani on January 17, 2015 in the presence of  Union Minister of Urban Development M Venkaiah Naidu and Chief Minister N Chandrababu Naidu.

Not only this, the temporary campus to have the hassle free operation of IIM Visakhapatnam was also finalised on top priority at Andhra University campus till the 300+ acre permanent campus is ready with all the requisite infrastructural facilities to accommodate the IIM V.

Now, when all the necessary requirements to begin the operation of IIM Visakhapatnam in July 2015 are almost complete, agreements ready, the issue of accommodating the faculty and students; lack of optimum class room size, laboratories, well equipped library and other relevant facilities has sprung up.  The authorities have found out the temporary campus not well equipped to accommodate 60 students. It is most unlikely that they couldn’t find the proper campus to accommodate meagre 60 students and provide them on campus or off campus hostel accommodation.

No hostel facility to students

It has been made clear by Andhra University (AU) administration that they may not be able to provide hostel facilities to the IIM students. Now the IIM Visakhapatnam students will have to search for accommodation on their own. It may raise many issues especially when students would not be able to get any assistance and assurance either from their IIM Visakhapatnam or from Andhra University.

It will be a great learning experience for the students of IIM Visakhapatnam as they will be taught by IIM Bangalore faculty.

Although Andhra University Vice Chancellor GSN Raju pledges all support in operations of IIM Visakhapatnam including deputing the University faculty to impart education to IIMV students, the fact remains that the curriculum design, pedagogy, assignments, case studies and other decisions how to conduct classes at IIM Visakhapatnam, have to be taken by IIM Bangalore.

If at all possible and feasible, the mentoring IIM Bangalore and Andhra University should search out some alternates and accommodations in the nearby locations to house the other infrastructure facilities so that IIM Visakhapatnam could begin the academic session with its full intake of 60 students in the birth session 2015-16.

These are not only the 15-20 students who will be deprived of admission opportunity at IIMV, but more than one crore on account of loss of tuition fee etc. will be lost by the IIM Visakhapatnam and eventually IIM Bangalore will have to bear the financial burden for first few years.

This is also true that additional 15-20 students will need very less additional expenses from IIM Visakhapatnam on them, as the class room, Library, cost of faculty will remain the same. Since MBA/PGP at IIM is the programme to find out how to get the most out of the minimum spending, it would be of interest for all the stake holders to work out the management economics on reducing the already low sanctioned intake of 60 students for the first flagship PGP/MBA batch.

Common Admission Test (CAT) is a mandatory exam for admission to all the Indian institutes of Management (IIMs). CAT 2014 in its registration process opened on Aug 6, 2014, invited applicants to register for IIM Andhra Pradesh (Now IIM Visakhapatnam) along with other IIMs. It implies that commencement of IIM Visakhapatnam academic session in 2015 was very well decided even at the time of applying for CAT 2014 in August 2014. IIM-Bangalore was assigned the mentoring role for the IIM-Visakhapatnam.

No IIM without Act of parliament

No IIM can be established without getting the parliamentary sanction. However in the budget speech 2014, the Finance Minister Mr Arun Jaitley missed to present the bill for IIM Andhra Pradesh before Parliament and announced the proposed establishment of only 5 IIMs. On the intense demand by Mr Chandrababu Naidu  the Chief minister of Andhra Pradesh, an ordinance to this effect was passed in 2014 itself to establish IIM Andhra. Invitation to register for IIM Andhra Pradesh in CAT 2014 put the final stamp on the upcoming IIM as the CAT 2014 brochure clarified further that the IIM Andhra would commence the academic session in 2015

Later, Minister of HRD, Smriti Irani promised that a bill on IIM would be introduced in Parliament in the budget session 2015. Honouring the words, the commitment was reiterated on the occasion of foundation stone laying ceremony in Visakhapatnam on Jan 17, 2015.  IIM-Visakhapatnam is the first of the 11 institutes sanctioned by the central government for Andhra Pradesh under the Andhra Pradesh Reorganisation Act.

Stay tuned to MBAUniverse.com for more updates on IIM Visakhapatnam