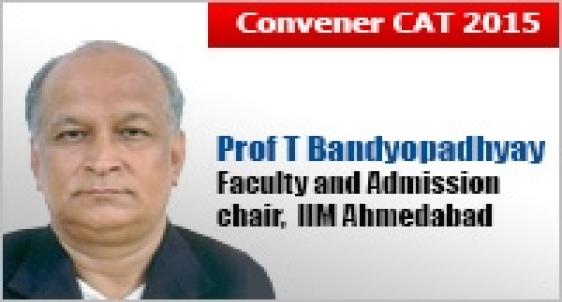 "I have just taken over I will give you the updates sometime next week" Prof Tathagata Bandyopadhya, faculty IIMA and CAT 2015 convener

Indian Institute of Management (IIM) Ahmedabad the top rated B school in India going to conduct CAT 2015 has officially announced the appointment of Prof T Bandyopadhyay, faculty and admission chair at IIM Ahmedabad as convener CAT 2015.

Accepting the congratulations and sharing with MBAUniverse.com after taking over as CAT 2015 convener Prof Bandyopadhyay  says “I have just taken over I will give you the updates sometime next week”.

Committed academician and able administrator clubbed in one is what Prof Tathagata is who pledges to conduct improved and aspirant friendly CAT 2015.

Common Admission Test (CAT) 2015 the mandatory exam for admission to management programmes at IIMs and other top B schools in India will be  conducted by IIM Ahmedabad with Prof Bandyopadhyay as Convener and in partnership with the CAT testing agency TCS in the months of October/November 2015.

Prof Tathagata Bandyopadhyay the CAT 2015 convener is a highly qualified management expert who is assigned with multi facet roles at IIM Ahmedabad.

Prof Bandyopadhyay is faculty in the area of Production and Quantitative Methods (P&QM); holds the charge of Chairperson Admissions committee at IIM Ahmedabad and is also the Chairperson, Financial Aid & Awards Committee at the top B school of India.

Known for his flair for research and writing, Prof Tathagata has been the editor of Calcutta Statistical Association Bulletin in 2009 and has been an active member on number of editorial boards. His Publications, case studies and reviews are widely read, referred and quoted across the globe.  His past and present Research works include Nonparametric Testing, Categorical Data Analysis, Measurement Error Models, Inference on Survey Data, Statistical Genetics,  Reliabilty Analysis, Survival Analysis, Survey Sampling among others.

Reins taken over from IIM Indore

After the first CAT in 2014 with IIM Indore, the testing partner TCS, appearing to have grown more matured in 2015, will have to co-ordinate with Prof Tathagata of IIM Ahmedabad for CAT 2015.

IIM Ahmedabad is the first IIM that was instrumental in beginning CAT exam as the  Computerised Based Test (CBT). It was IIM Ahmedabad that conducted the first computerized CAT in 2009 with testing partner Prometric and Prof Satish Deodhar, faculty IIM Ahmedabad as CAT 2009 convener.

With the number 1 B school of India convening CAT 2015 again after few years, it is expected that few more improvements, innovations and changes might come up in CAT 2015.

CAT 2015: Improve the pace of your reading; a must to score high percentile

CAT 2015: Beginning your journey to IIMs; how & wherefrom to walk on success path