MBAUniverse.com News Desk | :
June 8, 2015
With the fate of 4 out of 6 proposed new IIMs decided to commence operations in academic session 2015-16, proposed IIM Bihar and Odisha are still struggling to find the suitable campus 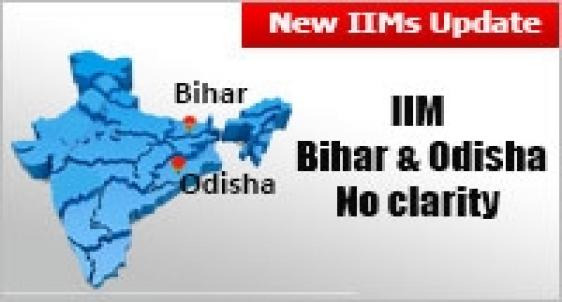 Decisions on opening of proposed IIMs could give you a smear of typical political game as despite the early decisions by the state Governments to open IIMs at one place, the decision was changed later

With the fate of 4 out of 6 proposed new IIMs decided to commence operations in academic session 2015-16, proposed IIM Bihar and Odisha are still struggling to find the suitable campus. This has given rise to the suspicion whether both of these IIMs would be able to take off with their maiden PGP batch 2015-17.

As per the directive of MHRD and the laid down norms, the temporary and permanent campuses of any proposed Indian Institute of Management (IIM) have to be situated in the same city since the IIM is known by its city and not by its state. While the decision on both the campuses for IIM Visakhapatnam in Andhra Pradesh; IIM Nagpur in Maharashtra; IIM Sirmaur in Himachal Pradesh and IIM Amritsar in Punjab has been finalized and all of these 4 IIMs are set to commence operation in academic session 2015-16, decision on IIM Bihar and IIM Odisha has yet to be finalized.

The delay is more surprising due to the fact that the admission process for all the other 13 IIMs is complete and candidates have got admission offers from the respective IIM, the dangling admission  for the proposed 6 new IIMs is yet to be finalized.

IIM Udaipur the admission co-ordinating IIM for new IIMs is still waiting for the clarity on admission to proposed 6 new IIMs from Ministry of HRD.

IIMs the premier B schools: Victim of Politics

Watching closely on the decisions on opening of proposed IIMs could give you a smear of typical political game as despite the early decisions by the state Governments to open IIMs at one place, the decision was changed later.

Except Himachal Pradesh, the 3 IIMs whose campuses have been finalized fall in the states where either the BJP Government or the Government of the political party supporting the BJP at Centre is in power. Himachal Pradesh does not have many options hence although the state took a bit long but recommended the best available campus site at Sirmaur to accommodate IIM Himachal.

Government of Bihar initially recommended Patna, then changed the place to BodhGaya where the permanent as well as temporary campuses were finalized at Magadh University after the visit of team from mentor IIM Indore. With the change of Guard in Bihar after the decision, it appears that IIM Bihar might go for another change and may not begin operations in 2015.

On the same lines Government of Odisha initially recommended Bhubaneshwar and later changed the place to Sambalpur in Odisha West. Now the IIM Odisha has got entangled between the politics of State and Central Governments and it appears difficult for it to commence operations in the academic session 2015-16.

Apart from suitable infrastructure for setting up the premier B school IIM in the city, it requires good nearby Air, Rail, Road connectivity. In case it is not there, it becomes difficult to set up the IIM at the place.

It appears MHRD would not like to hold back admissions for other 4 proposed IIMs in the academic session 2015-16. Accordingly even if  some dispute in the campuses for IIM Bihar and Odisha persists, and these 2 IIMs are not able to take off in 2015-16, MBA aspirants would get admission in other proposed 4 IIMs at Amritsar, Nagpur, Visakhapatnam and Sirmaur whose sites for permanent as well as temporary campuses  have been finalized.

The admission coordinating IIM Udaipur is also waiting for the clear instructions from MHRD in regard to PGP admission for batch 2015-17 in proposed 6 new IIMs as earlier also it was clarified that all the 6 IIMs would start functioning from academic session 2015-16. However while a few IIMs may not commence operations in case the site dispute is not resolved, one or two may begin with reduced intake due to lack of proper infrastructural and accommodation facilities.

MHRD yet to decide fate of 360 students

Each of the proposed 6 new IIMs is supposed to begin with the initial intake of 60 students, any laxity in site selection; lack of infrastructural facilities or lack of accommodation would directly affect the MBA aspirants waiting for admission offer from these 6 proposed IIMs. If the intake is reduced or any of the IIMs doesn’t begin operation in 2015, many of the CAT 2014 takers with high percentile may be deprived of admission in the premier B school.  It would also affect adversely on the morale of the aspirants and the creditability of the mentor IIMs and the Government as despite announcing the registration for 6 proposed new IIMs for PGP batch 2015-17 in CAT 2014, the IIMs wouldn’t be able to commence operation in 2015. Now the deprived students would have to prepare for the entrance exam all over again with no certainty as to what happens next.

In view of all this, instead of remaining in waiting mode and moving at snail’s pace MHRD should gear up and take initiative to resolve the issue quickly and keep its commitment without making any candidate suffer from political tug of war. It should be noted that hardly 2 months remain to begin operations of all the proposed 6 new IIMs and there is a lot of work to be done to finalise the things.