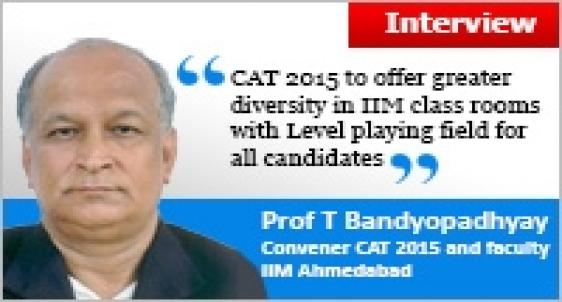 "We hope to create a level-playing field for all candidates, no matter what educational background they come from" Prof Tathagata Bandyopadhyay, CAT 2015 convener & faculty at IIM Ahmedabad

Despite remaining short of time, instead of losing his cool he thankfully responded MBAUniverse.com when approached for a brief interview and said “I am busy with registration of new batch. Will soon get back to you, thanks”

It is well known now, after the publication of story on MBAUniverse.com portal, IIM Ahmedabad is going to conduct CAT 2015 and Prof Tathagata Bandyopadhyay, senior faculty and admission chair at IIM Ahmedabad has been assigned the responsibility to convene CAT 2015.

Prof Bandyopadhyay the CAT 2015 convener is a highly qualified academician and management expert. He is faculty in the area of Production and Quantitative Methods (P&QM) at IIM Ahmedabad. Apart from various other assignments he is also holding the post of the Chairperson, Financial Aid & Awards Committee at IIM Ahmedabad.

Prof Tathagata is known for his flair for research and writing. He has been the editor of Calcutta Statistical Association Bulletin in 2009 and has been an active member on number of editorial boards. His Publications, case studies and reviews are widely read, referred and quoted across the globe.  His past and present Research works include Nonparametric Testing, Categorical Data Analysis, Measurement Error Models, Inference on Survey Data, Statistical Genetics, Reliability Analysis, Survival Analysis, and Survey Sampling among others.

After the CAT 2015 Group meeting, Prof Tathagata Bandyopadhyay, CAT 2015 convener, despite his busy schedule spared some time and shared the proposed changes to further improve the CAT 2015 making it more aspirant friendly.

CAT 2015 to provide level playing field
Sharing with MBAuniverse.com about proposed changes in conduct of CAT 2015 and his vision for further improvement at operational and content level in convening CAT 2015, the largest management entrance test, Prof Tathagata Bandyopadhya said “We hope to create a level-playing field for all candidates, no matter what educational background they come from”

The statement is significant enough since so far top rated IIMs and other B schools have more number of students from Engineering background. It may be for the first time that innovative changes in the computer based CAT 2015 are brought about to provide equal opportunity of scoring high to the test takers irrespective of their academic background.

In fact when the candidates from Humanities, commerce, Arts, science, medical & paramedical streams get the opportunity to score high in CAT 2015 with more questions related to their study domain, they will sure be able to score high percentile and thereby will have better chances of getting shortlisted for final admission round. With some of the weightage awarded for gender diversity, the vision of CAT 2015 convener to improve gender diversity in class rooms of IIMs may become a reality in academic session 2016-17.

CAT 2015 to allot test centres to females near cities
To fulfil the target of inculcating interest among women candidates and to avoid any hardship they face while going to take CAT 2015 at some test centre in remote area, the CAT 2015 convener Prof Tathagata is proposing to chalk out the plan “to accommodate the female candidates in centres near the city areas as far as possible so that the travel for them could be reduced”

It may be noted that around 12-15% CAT aspirants do not take the exam despite submitting their registration form. This number includes hundreds of women candidates who skip the test due to non-accessibility of test centre from their place, long journey hours, problem of transportation among other issues. CAT 2015 centre in the convenership of Prof Tathagata Bandyopadhyay proposes to do away with all these problems so that the girl candidates may not remain absent and are able to take CAT 2015 without any difficulty.

Common Admission Test (CAT) 2015 is the mandatory exam for admission to management programmes at IIMs and other top B schools in India. The first computerized CAT was also convened by IIM Ahmedabad in 2009.

Common Admission Test (CAT) has so far been divided in 2 sections and substantial changes were made in CAT 2014 exam pattern as each section had an increased number of questions from 30 to 50 making the overall question tally to 100. However, sectional time constraint of 70 minutes was removed and the test takers were allowed to toggle between the sections within the overall time limit of 170 minutes.

CAT 2015 might bring more aspirant friendly changes for the benefit of test takers, although difficulty level is not expected to decline.

CAT 2015 Notification: What we can expect in the release; know more

CAT 2015: Utilize best the next 150 days; how to overcome the weakness and focus on your strengths