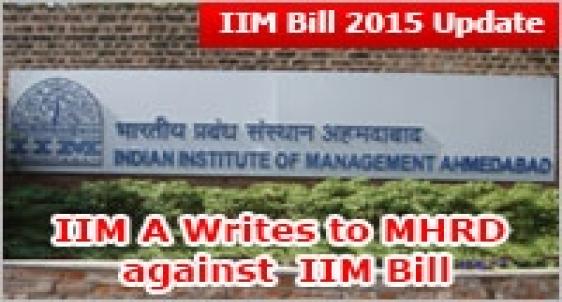 In an urgently called press conference at Old campus of IIM Ahmedabad on June 25, 2015,  A. M. Naik, Chairman, Board of Governors, IIM Ahmedabad & IIMA society expressed his anguish and concern on the proposed IIM Bill 2015 which in his view aims to curb the autonomy of the premier B school and centralize the decision taking powers with MHRD.

In no ambiguous terms Mr Naik Chairman BoG, IIMA has written a strong letter to the Minister of HRD, Smriti Irani stating his deep reservations on the proposed IIM Bill. In his view a few provisions and clauses in the bill are going to seriously compromise the autonomy of the institute.

Mr A M Naik  apart from being the Chairman BoG, IIM Ahmedabad is the Group Executive Chairman of India’s Corporate major Larsen & Toubro. Sharing the concern on IIM Bill 2015 he said “We believe that developing a bill that helps us achieve its vision requires a through and collaborative review process which needs adequate time and deliberation”. Naik referred to section 3(k) and section 36 of the IIM Bill 2015 as they would take away the authority from IIM Boards and will centralize it to the MHRD. The autonomy of IIMs as such will stand eroded after passing of the IIM Bill 2015 and IIMs would not be able to take even operational decisions quickly.

Clause 36 reads
“The board may, with the approval of the central government, by notification, make regulations not inconsistent with this Act and the rules made thereunder to carry out the provisions of this Act".

Both the clauses in view of Mr A M Naik will take away the autonomy of IIMs and therefore need further public debate. Cabinet has already returned the IIM Bill 2015 for public debate the last date for which got over on June 24, 2015.

Extend Public discourse date to July 31
It was emphasized in the letter as well as through the appeal to MHRD in press interaction not to push the bill without proper public debate and extend the date for public debate till July 31, 2015.

Prof Ashish Nanda, Director IIM Ahmedabad while talking to media on June 18, 2015 at a seminar organized at IIFL  had already advised against the provisions of micro-management of IIMs in proposed IIM Bill 2015 that could curb the autonomy of the top B-schools of the country and stated “Autonomy is at the core of flourishing of academic institutions. The government can definitely oversee functioning of educational institutions from a distance, but micro-management is never good. It makes people in the academic institutions feel disempowered."

IIMs are in favour of the bill but want the council to have low representation of bureaucrats and greater representation of industry, academicians and IIM officials. Disruption in formation of IIM Society could prove detrimental to IIM autonomy. Accordingly the older IIMs with large and influential alumni base like IIM Ahmedabad, Bangalore, Calcutta, Lucknow and others are not in favour of dissolving their societies as they have their alumni and donors who have been accommodated in the societies. IIMs wouldn’t like to disrupt the formation and have requested the MHRD to retain it in the IIM Bill 2015.

Stay tuned to MBAUniverse.com for more updates on IIM Bill 2015