IIM Bihar to be renamed as IIM Gaya: Admission process begins for the maiden PGP batch of 140 students

MBAUniverse.com News Desk | :
June 26, 2015
IIM Bihar as per the recently launched website still retains the name of its state instead of the city, the mentor IIM Calcutta has moved forward to announce the shortlisting criteria for admission 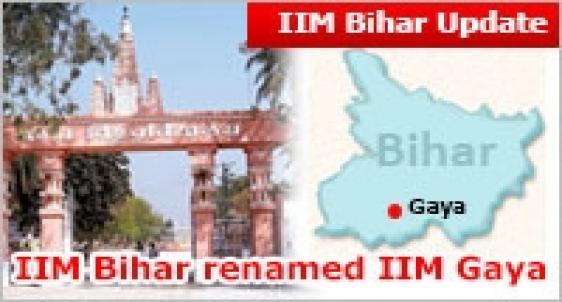 With the unanimous decision taken in the Cabinet meeting headed by none other than the Prime Minister Shri Narendra Modi himself on June 24, 2015, the speculation on permanent campus of IIM Bihar has ended as the premier B school is finally going to be set up at Bodhgaya in Bihar. Although at its temporary campus.

In a significant decision taken in its meeting the Cabinet has also decided that the maiden PGP batch 2015-17 of each of proposed 6 new IIMs will have 140 students. It may be recalled that earlier.

The mentor IIM Calcutta has launched the admission website for Indian Institute of Management (IIM) Bihar without disclosing the location of  its permanent campus for the obvious reason that it was stuck between MHRD and the Government of Bihar. The fog now stands cleared.

Switching over the mentorship of IIM Bihar from IIM Indore to IIM Calcutta has at least favoured the IIM Bihar aspirants as the admission process for IIM Bihar has begun. Ironically, an IIM is known by its city and not by its state but due to the reasons best known to MHRD, Government of Bihar and the mentor IIM Calcutta, IIM Bihar has not got its new name IIM Gaya although the maiden PGP batch 2015-17 of IIM Gaya is proposed to be launched at the campus of Magadh University in BodhGaya.

To begin at least the admission process and make the IIM Bihar a reality in academic session 2015-16 IIM Calcutta has announced the shortlisting criteria for the admission seekers in IIM Bihar. It is really pathetic to know that once the seat of knowledge and wisdom, Bihar has lagged behind in finalizing the permanent campus for the prestigious Indian Institute of Management in its state and thereby not being timely able to decide the name of the city where it proposes to set up the top B school of the country. This is evident by the fact that till date IIM in Bihar is carrying with it the name of its state instead of making the B-school known as IIM Gaya. In the political leg pulling process the mentor IIM Calcutta may not be able to do much. The apathy of MHRD and state Government is adversely affecting the future of IIM aspirants.

If all goes well and unlike its dubious reputation, the state Government in Bihar decides quickly on the permanent campus site of  IIM Bihar in Gaya, it may become the 16th IIM in the IIM family after IIM Nagpur and IIM Sirmaur who have all the relevant information available in public domain.

Confirm interest by June 28
IIM Calcutta the mentor IIM for IIM Bihar is sending mail to all the prospective students who registered for IIM Bihar in CAT 2014 and have met the shortlisting criteria to confirm their candidature. IIM Calcutta further clarifies If your email address provided in CAT 2014 registration form has become invalid, please send an email at [email protected] before June 28, 2015 along with your CAT ID No., making such a request. After that, follow the instructions sent to you by IIM Calcutta. Please note that email from IIM Calcutta will come from iimbihar@iimcal.ac.in.

The last date to reconfirm the interest in IIM Bihar is June 28, 2015.The candidates have been provided a link to the registration page where they must express and reconfirm their desire to pursue their candidature further for the admission to PGP in management at IIM Bihar.

IIM Bihar: Shortlisting criteria
The shortlisting Criteria for eligibility to be considered for admission to Post Graduate Programme in Management, 2015-17 based on CAT 2014 cut off at IIM Bihar would be as follows. Candidates not meeting the eligibility criteria will not receive any email.

Components of PI round
There will not be any physical GD; PI or WAT to be conducted further for admission to IIM Bihar. In fact IIM Bihar will use the WAT & PI scores provided by IIM Udaipur which has coordinated the process for new IIMs.

Final Selection at IIM Bihar
Selection at this stage will be based on the ranks of the candidates computed separately for each category (General/SC/ST/NC-OBC/DAP) on the basis of their Final Scores (FS). The numbers selected in different categories will be in proportions mandated by the law.

The FS of a candidate, who meet the CAT-2014 cut-offs and who expresses and reconfirms his/her desire to pursue the candidature further by the stipulated date, is expected to be computed using the following rule:
Final Score = 70% weightage to CAT Score + 10% weightage to WAT scores + 20% weightage of PI scores

Faculty from IIMC to teach for 3 years
IIM Calcutta will mentor all activities at IIM Bihar till it moves to its permanent campus (about 3 years later), and IIM Bihar is able to handle these activities entirely on its own. Since recruiting full-time faculty is a fairly long process, during the mentorship period and while IIM Bihar's own faculty are recruited, faculty members from IIM Calcutta will be delivering courses at IIM Bihar.

This may include a few visiting faculty selected by IIM Calcutta to meet their exacting standards. The overall design, quality and delivery of PGP will be to the standards and with direct involvement of IIM Calcutta. Candidates going to join IIM Bihar should expect to see some of the best faculty members in the country today.

Stay tuned to MBAUniverse.com for more updates on IIM Bihar