MBAUniverse.com News Desk | :
June 27, 2015
The twist and tug-of-war between the Central and state Government on IIM Odisha appears to be over and IIM Sambalpur in Odisha may become a reality with its maiden PGP batch 2015-17 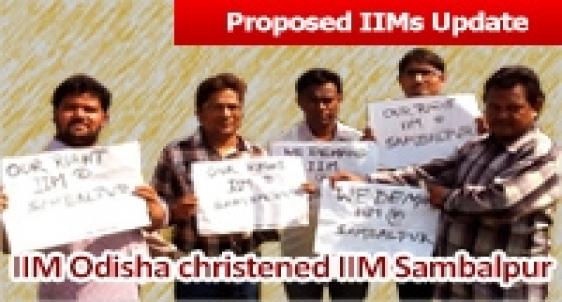 Since both the campuses of the IIM are finalized in Sambalpur, at least the academic session 2015 - 16 could be started at IIM Odisha

The twist and tug-of-war between the Central and state Government on IIM Odisha appears to be over and IIM Sambalpur in Odisha may become a reality with its maiden PGP batch 2015-17 from the academic session 2015-16.

Earlier on the fresh recommendations of Government of Odisha, the Ministry of Human Resources Development (MHRD) Government of India deputed to Sambalpur in Odisha-west a team comprising 4 members to inspect and finalize the suggested permanent and temporary campus sites for IIM Odisha. Apart from 4 central committee team members, 2 other members namely Central Public Works Department (CPWD) Chief Engineer and Secretary of Employment and Technical Education department from Odisha also accompanied the Central team. On the recommendations of the team and insistence of Odisha Government, MHRD has consented to establish IIM at Sambalpur taking it away from Bhubaneshwar.

Government of Odisha initially recommended Bhubaneshwar as its choice to establish IIM Odisha but later changed the place to Sambalpur in Odisha West. IIM Odisha got entangled between the politics of State and Central Governments. Although it appeared difficult for IIM Odisha to commence timely operations as the sites for both the campuses-temporary and permanent could not be finalized earlier now since both the campuses of the IIM are finalized in Sambalpur, at least the academic session 2015-16 could be started at IIM Odisha.

Apart from suitable infrastructure for setting up the premier B school IIM in the city, it requires good nearby Air, Rail, Road connectivity as IIM is no regional B-school and students, faculty, experts, visitors to IIMs gather from all over the country and with the growing alumni base an IIM becomes the point where recruiters from all over the world arrive in placement season. Hence the site for an IIM has to be carefully selected.

The team after visiting and making thorough review of proposed temporary and permanent campuses sites for IIM Odisha submitted its report to MHRD. The final decision of the Cabinet to set up the IIM at Sambalpur in Odisha came a day before the site selection committee report was submitted to MHRD.

As per the directive of MHRD and the laid down norms, the temporary and permanent campuses of any proposed Indian Institute of Management (IIM) have to be situated in the same city since the IIM is known by its city and not by its state. Hence the suitability for both the campuses at Sambalpur to enable IIM Odisha to take off in 2015 made the launch possible.

Out of the 6 proposed new IIMs, 3 IIMs namely IIM Nagpur in Maharashtra, mentored by IIM Ahmedabad followed by IIM Sirmaur in Himachal Pradesh mentored by IIM Lucknow and IIM Bihar to be located in Gaya and mentored by IIM Calcutta have been able to launch their respective websites and are in the final stage to complete their admission process. This is despite the fact that the decision on the temporary and permanent sites of above IIMs was taken much later than the decision on the sites of 1 or 2 other IIMs which was taken earlier. As of now, IIM Nagpur stands as the 14th; IIM Sirmaur as15th and IIM Gaya in Bihar as 16th in the family of IIMs.

The temporary and permanent sites for IIM Visakhapatnam; IIM Punjab and IIM Odisha have also been finalized and they might soon join the family of IIMs by beginning their admission process and launching of their websites. Foundation stone at the permanent site of IIM Visakhapatnam was also laid by MHRD Minister Smriti Irani as early as in January 2015 as against no foundation laid for any other permanent campus of any proposed new IIM, the website and admission process of all these other IIMs are still at bay.

MHRD doubles the intake for IIM
Earlier the decision was to have an intake of 60 students for the first batch in each of the proposed 6 new IIMs. Some of the mentor IIMs found that the temporary campuses of these proposed IIMs may not accommodate this number and therefore preferred to reduce the intake. Now the decision has been taken in the Cabinet meeting on June 24, 2015 to have an intake of 140 students in each of these proposed 6 new IIMs, it may become difficult to accommodate such a large number in the temporary campuses of these IIMs and some of them may begin their maiden batch with a lesser intake say 60-70 students.

It has also been decided in the Cabinet meeting that after 7 years from the launch of these IIMs, this intake would increase to 560 candidates in each of these proposed 6 new IIMs. It may not pose any problem as by the time the permanent campuses of all these IIMs would become functional.

Stay tuned to MBAUniverse.com for more updates on IIM Odisha