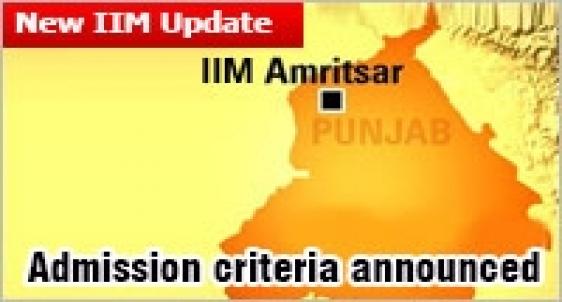 Leaving behind the higher ranking IIMs like IIMB and IIMI in mentorship to their proposed new IIMs, the IIM  Kozhikode, mentor IIM for IIM Amritsar has announced the opening of admission process for the maiden PGP batch 2015-17 of upcoming IIM Amritsar. The mentor IIM Kozhikode responding to the query when IIM Amritsar is starting its academic program has responded “IIM Amritsar will start its first academic program, Post Graduate Program (PGP) in Management in July 2015”

Claiming that IIM Amritsar is the 15th IIM in the family of IIMs, IIM Kozhikode has launched the website of IIM Amritsar, the 4th among the proposed 6 new IIMs whose websites and admission process have been announced. Going by the system, although IIM Amritsar could be the 15th IIM as per the Budget 2014 announcement, it becomes 17th IIM after IIM Nagpur (14th IIM); IIM Sirmaur (15th IIM); IIM Bihar (16th IIM) whose admission process and websites have been launched.

IIM Amritsar website specifically mentions all about the proposed beginning of the first batch at the IIM with proposed selection criteria, infrastructure, fee structure and faculty arrangement from IIM Kozhikode which is expected to continue till next 3 years, thereby giving the best learning experience of IIM Kozhikode to the students of IIM Amritsar.

IIM Amritsar: Admission schedule
The website of IIM Amritsar http://iimk.ac in/iimamritsar/index.php has categorically specified the important dates for the different steps of PGP 2015-17 admission process. Candidates desirous of seeking admission opportunity to IIM Amritsar should meticulously adhere to these deadlines.

The second merit list for admission to PGP 2015-17 batch at IIM Amritsar will be announced on July 13, 2015 and the last date for submission of acceptance of admission offer by the candidates whose names appear in the 2nd merit list is July 20, 2015.

From July 22, 2015 onwards, IIM Amritsar will directly contact the candidates over phone for admission.

Admission seekers to re-confirm interest
IIM Amritsar has asked the prospective students who registered for IIM Punjab in CAT 2014 and have met the shortlisting criteria to confirm their candidature by login to IIM Amritsar website in the admission section with their CAT 2014 registration number and email id.

The already registered candidates for IIM Punjab in CAT 2014 have been asked to confirm their interest for admission to PGP at IIM Amritsar. It has been considered necessary as in CAT-2014, when candidates applied, they had expressed their interest in "IIM in Punjab". Now, the location is known to be Amritsar. Further, during the time that has passed, many applicants may have already confirmed other options for admissions. Given the relatively short time available for IIM Amritsar admissions, the institute would not like to spend time on people who are no longer interested in IIM Amritsar.

The admission offers in each IIM are independent of others and therefore accepting or rejecting an offer from any other IIM will not affect chances in IIM Amritsar, or vice versa.

The shortlisting Criteria for eligibility to be considered for admission to Post Graduate Programme in Management, 2015-17 based on CAT 2014 cut off at IIM Amritsar would be more or less same as that of IIM Nagpur, Sirmaur and Bihar. Candidates not meeting the eligibility criteria will not receive any communication.

IIM Amritsar website says “The admission to the programme is through a rigorous and internationally acclaimed Common Admission Test (CAT) followed by GD/WAT and PI.”  The candidates who have scored high sectional and overall percentile in CAT 2014 as detailed below and have participated in GD/PI/WAT process for new IIMs are supposed to be considered for admission in IIM Amritsar.

The shortlisting criteria for IIM Amritsar is proposed on the lines as adopted by other proposed 3 IIMs whose admission criteria have also been announced.

IIM Amritsar: Fee structure
The tuition fee for IIM Amritsar is going to be around Rs. 9 lakhs for 2 years. IIM Amritsar will share the exact amount and details of breakup will be given in the admission offer. Leading banks routinely offer educational loans at concessional terms as per Govt. of India guidelines for all IIMs including IIM Amritsar.

This may include a few visiting faculty selected by IIM Kozhikode to meet their exacting standards. The overall design, quality and delivery of PGP will be to the standards and with direct involvement of IIM Kozhikode. Candidates going to join IIM Kozhikode should expect to see some of the best faculty members in the country today.

IIM Amritsar Campus
IIM Amritsar would commence its operations and activities in the transit campus located inside the Punjab Institute of Technology, Government Polytechnic Compound till its own infrastructure and campus is setup and ready for use. The facilities consist of classrooms, recreational space, activity rooms, library, computer and sports facilities. The transit campus is located close to Guru Nanak Dev University (GNDU) Campus.

Site for the permanent campus of IIM Amritsar is already provided by the Government of Punjab and finalized by the site-selection committee set up by the Ministry of HRD, Government of India. IIM Amritsar campus is proposed to come up at a site near Manawala on Amritsar-Jalandhar GT Road in 60 acres of land area.

The students at IIM Amritsar in the first and subsequent PGP batches can hope for a very good placement as happened at IIM Kozhikode with an average placement package of Rs. 14.92 lakhs and highest placement going to Rs 29.5 lakhs in 2015.

Sharing all about the prospective students’ queries IIM Amritsar has formed an FAQ section and has responded on all the admission related and other queries.