MBAUniverse.com News Desk | :
October 3, 2015
FMS Delhi will award highest weightage of 40% to VRC section in its shortlisting criteria for MBA 2016-18 batch while the other 2 sections on Quant and DILR will have equal weightage of 30%. 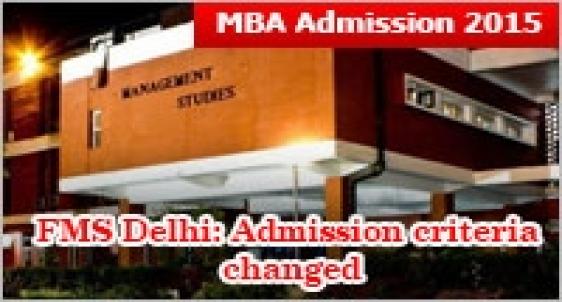 To encourage diversity of Gender and Academic Disciplines, for the purpose of short listing candidates for Interview Process different weightages shall be assigned to the scores of different sections of the CAT 2015” Dr M L Singla Dean FMS Delhi

In a deviation from earlier process in shortlisting for MBA admission after declaration of CAT 2015 result FMS Delhi is going to adopt a different shortlisting criteria for  the PI round of MBA 2016-18 batch than the one it used to follow till MBA admission 2015.  A better bet than many IIMs and other top rated B schools, FMS is going to declare for the first time the shortlist of candidates based on varying weightage to sectional scores in CAT 2015 with a vision to improve academic and gender diversity in FMS class rooms.

According to Dr M L Singla Dean FMS Delhi “To encourage diversity of Gender and Academic Disciplines, for the purpose of shortlisting candidates for Interview Process different weightages shall be assigned to the scores of different sections of the CAT 2015. A composite score shall be computed giving weightages of 30%, 30%, and 40% to the scores of QA, DI/LR and VRC sections respectively as provided by the CAT Centre for the CAT 2015 Examination for candidates who apply to FMS. This composite score so computed shall be used only for shortlisting the candidates for Interview Process.”

Till MBA admission 2015 FMS used to shortlist the candidates for the PI round on the basis of overall CAT percentile.

More weightage to VRC section
CAT 2015 will have 3 sections as against earlier 2. The first section will consist of questions on Quantitative Ability (Quant); second on Data Interpretation and Logical Reasoning (DILR) and the third on Verbal Ability and Reading Comprehension (VRC).

Faculty of Management Studies (FMS) University of Delhi will award highest weightage of 40% to Verbal Ability and Reading Comprehension (VRC) section in its shortlisting criteria for MBA 2016-18 batch while the other 2 sections on Quant and DILR will have equal weightage of 30%.

However, going by the past trend candidates should be aware that 98+ percentile in CAT 2015 overall will be required to be shortlisted at FMS in MBA admission process 2016. The catch is that if you score high in VRC section, you will be awarded higher weightage in comparison to your peers as the weightage to other sections is lower by 10%.

FMS has an intake of 200 students in its flagship 2 years full time MBA programme affiliated to Delhi University.

The situation has changed now and the candidates will have to score high sectional percentile in CAT 2015 to get shortlisted for MBA 2016-18 at FMS Delhi.

FMS is among a few of the top rated B schools who declare the shortlist at the earliest possible. Except for the year 2014 when FMS declared the shortlist a little late, the shortlist at FMS is declared for all the categories is expected to be declared in the month of February 2016 after declaration of CAT 2015 result in second week of January.

FMS Delhi is a high ROI B school with a low fee structure and high placement packages.

The annual tuition fee payable to Faculty of Management Studies, University of Delhi is approximately Rs. 10,000/- for MBA (FT) programme.

Total fee for 2 years MBA (Full time) programme at FMS including some other charges does not exceed Rs.25 thousand.

Application process for FMS Delhi opened on October 1, and will remain open till November 15, 2015.

FMS Delhi is one the oldest and top ranked B-school in India started in 1954 in University of Delhi. The main USP of FMS is its very low fee with very high quality of education. Placement record of the FMS is excellent. In placement season 2015 average compensation at FMS Delhi increased to Rs.17.04 lakhs per annum from Rs 16.18 lakhs in 2014, showing a rising trend in the MBA job market.

Top 50% of the offers accepted by the FMS students had an average salary package of Rs.20.46 lakhs.  There were 52 students out of 217 who received offers with packages for more than Rs.20 lakhs per annum. The highest domestic compensation also increased to Rs.35 lakhs in placement 2015.