MBAUniverse.com News Desk | :
December 23, 2015
It is expected that 55000 MBA aspirants will be shortlisted by IIMs only, out of 1.80 lakh candidates who took CAT 2015 exam and would finally offer admission to 5500 or more candidates 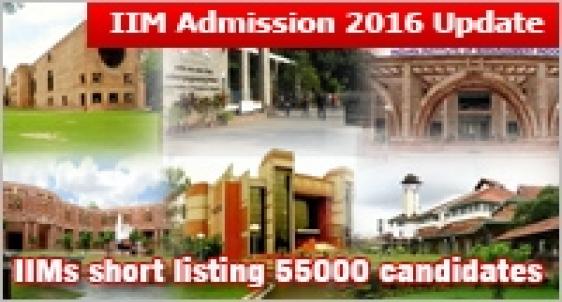 If you appeared in CAT 2015 and are able to score a good percentile between 85 to 100, you could be one of the shortlisted candidates in IIMs

Indian Institutes of Management (IIMs) have not only revised the admission policy for the forthcoming academic session commencing 2016 but have also increased their intake and have liberalized the shortlisting criteria to improve academic and gender diversity in their class rooms. It is expected that 55000 MBA aspirants will be shortlisted by IIMs only out of 1.80 lakh candidates who took CAT 2015 exam. Out of this number, 5500 are proposed to be offered final admission letter by these IIMs in order of merit, if they fulfill the eligibility criteria and qualify the minimum required cut off percentile.

80 to 100 percentilers among lucky ones
Addition of 6 new IIMs in 2015 to the family of existing 13 IIMs will now offer the best opportunity for CAT 2015 aspirants to get into their dream B school in 2016.

If you appeared in CAT 2015 and are able to score a good percentile between 85 to 100, you could be one of the shortlisted candidates in IIMs. Following factors could click the opportunity in your favour and could help in turning your dream come true to pursue MBA/PGP in 2016 from an IIM

-- IIMs propose to improve academic and gender diversity in their class rooms. Accordingly they have announced to award weightage to the candidates from non-engineering back ground and to female candidates.

-- IIMs shortlist the candidates around 10 times of the intake. Accordingly It is estimated that 55000 candidates would be shortlisted by IIMs in 2016 for PI round.

Intake of 5500 in IIMs
At present the total intake in all the 19 IIMs is around 4500 students to their flagship programmes. In 2016 this intake is expected to increase beyond 5500 students scoring high sectional and overall percentile in CAT 2015.

In fact, due to paucity of space at the campus for the first batch, these new IIMs have not been able to offer admission to the full sanctioned intake capacity and this glitch is expected to be overcome in the academic session 2016-17. Apart from this the existing 13 IIMs are also expected to have an increased intake in 2016.

The top rated and older 7 IIMs namely IIM Ahmedabad, Bangalore, Calcutta, Lucknow, Kozhikode, Indore, Shillong have an intake of around 3300 students per year, it is expected to increase to 4000 in 2016.

Another set of 6 IIMs launched in 2010-11 which includes IIM Kashipur, Raipur, Ranchi,  Rohtak,   Tiruchirappalli and Udaipur  have also started increasing their intake by 20 to 40 students in each of them. It is expected that their total intake in 2016 would rise from 800 students to 1000 students.

The Budget 2014-15 brought with it 6 new IIMs in the states of Andhra Pradesh (IIM Visakhapatnam); Maharashtra (IIM Nagpur); Himachal Pradesh (IIM Sirmaur); Punjab (IIM Amritsar); Bihar (IIM Bodh Gaya) and Odisha (IIM Sambalpur) making the total tally of IIMs to 19. The 20th IIM is proposed to be set up in the state of Jammu & Kashmir and would commence operation in 2016.

New IIMs with 140 intake each
The intake for the 6 new IIMs that launched their first batch in 2015 was restricted to around 60 students each as against the sanctioned intake of 140 students each. These IIMs could not offer admission to 140 students due to infrastructural constraints and the intake capacity has remained limited to 60—70 students in each of them, making it a total strength of not more than 400 students for 2015. It is expected that in 2016 all these 6 IIMs will be able to offer admission to 140 students each increasing their intake capacity to 800 students after they have relaxed their minimum required CAT 2015 percentile.  The 7th IIM at J&K, if launched may have the intake of 60 students in 2016.

Evaluate your position
Although actual cut offs in order of merit may go up or down at IIMs, you need to assess your position. Unless you are aware what likely score you may get in CAT 2015, you may not be able to assess your position nor you would be able which IIM you might get. To help you know your authentic and expected percentile on the basis of your performance, you may login to MBAniverse.com at the link http://www.mbauniverse.com/cat-percentile-predictor/ and evaluate what lies ahead in store for you.

Please note that at the stage-1 of shortlisting by IIMs, it is the CAT 2015 score that would play most prominent role. Better the score more would be your chances to get shortlisted by IIMs.

Other factors like academic score in Class X; XII and Graduation and diversity will also be considered but while a few would take these factors into account at the first stage shortlisting, other would account them for in the final admission round. For example IIM Kashipur, Rohtak, Ranchi, Raipur, Trichy and Udaipur would shortlist the candidates on the basis of their CAT 2015 scores at the first stage.

It is advisable to get prepared with your anticipated score, search for the appropriate B-school on the basis of your expected score and prepare for the PI round of the admission process from now on instead of waiting for the CAT 2015 result proposed to be declared in the second week of January, 2016.

Stay tuned to MBAUniverse.com for more updates on PGP 2016-18 Admission in IIMs