MBAUniverse.com News Desk | :
December 30, 2015
According to MHRD, there are only 13 IIMs and not 19 as the 6 new IIMs that started operating their maiden academic session in 2015, are not considered by MHRD as existing and working 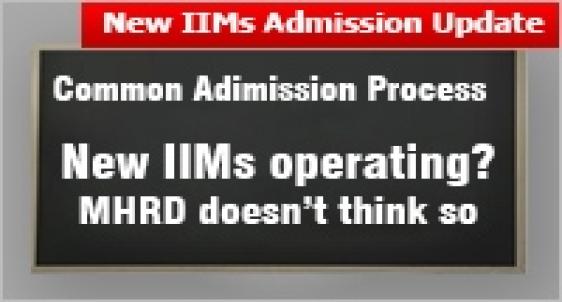 Number of candidates who appeared in CAT 2015 have been approaching MBAUniverse.com and raising the query as to why the list of IIMs with MHRD has no mention of new IIMs

How many IIMs are there in India - 19 or 13? According to MHRD, there are only 13 IIMs and not 19 as the 6 new IIMs that started operating their maiden academic session in 2015 are not considered by MHRD as existing and working. The list of IIMs published by the Ministry of Human Resource Development at the link http://mhrd.gov.in/iims consists of only 13 IIMs.

New IIMs: MHRD with ‘who cares attitude’
6 new IIMs namely IIM Amritsar in Punjab; IIM BodhGaya in Bihar; IIM Nagpur in Maharashtra; IIM Sambalpur in Odisha; IIM Sirmaur in Himachal Pradesh and IIM Visakhapatnam in Andhra Pradesh were established after they were proposed in the Budget session 2014 by the Finance Minister Mr Arun Jaitley. On the top of it Smt Smriti Irani, Hon’ble HRD Minister laid the foundation stone of IIM Visakhapatnam and have also launched the inaugural operation in a few of these IIMs.

Neither the 2 HRD Ministers, the army of babus working in MHRD nor the mentor IIMs have cared to get the newer IIMs added to the list of the prestigious IIMs. Either these IIMs are not operating or would begin operating after their mentorship period is over. MHRD has not clarified in the list. These IIMs are neither existing nor proposed whereas 254 students have taken the risk of studying in these IIMs which are operating with much less than their approved intake for the first academic session.

Great struggle not recognized by MHRD
The establishment and operation of these 6 new IIMs remained a challenge for all the stake holders. Number of these IIMs got stuck in the tug of war between central and state governments. For example the decision to finalise the temporary and permanent campuses of IIM BodhGaya remained suspended for a long time as it had to be decided whether the IIM in Bihar had to be established at Patna or BodhGaya. Same was the case for IIM Sambalpur which continued struggling between Bhubaneshwar and Sambalpur. Presmises for IIM Amritsar and IIM Sirmaur continued to be changed frequently. Only IIM Nagpur and IIM Visakhapatnam were the 2 IIMs the fate of whose was decided well in advance and premises for both of them were decided well in time.

In fact IIM Nagpur was the first IIM mentored by IIM Ahmedabad that got its website and began its admission process. All the other 5 followed it.

Students confused
Number of candidates who appeared in CAT 2015 have been approaching MBAUniverse.com and raising the query as to why the list of IIMs with MHRD has no mention of new IIMs. The query can be best answered by MHRD functionaries only as it does not reflect a good image of the government nor it satisfies the prospective global applicants who wish to seek admission in these new IIMs.

All 6 have fewer students
The panicky situation adds to the woes of these new IIMs who have under capacity utilization. The facts reveal that there are only 22 students at IIM Sirmaur; 30 at IIM BodhGaya; 45 at IIM Amritsar; 48 at IIM Sambalpur; 54 at IIM Visakhapatnam and 55 at IIM Nagpur.

No transparent admission policy
Fearing further dip in the intake the admission policy for PGP 2016-18 by 4 of the 6 new IIMs has not yet been finalized and announced although CAT 2015 result is going to be declared in a few days.

IIM Sirmaur and IIM Amritsar who have announced their admission policy for 2016-18 batch have substantially reduced the required CAT 2015 percentile for shortlisting the candidates.

MHRD not concerned
It appears that MHRD stumbled and resorted to abrupt mushrooming of IIMs without giving a proper thought which has not only raised the doubts among the stake holders and MBA aspirants in particular whether they will have a well secured future and competitive ability in national and global business management market on completing their MBA/PGP in 2018 from these 6 new IIMs.

Will MHRD wake up?
Out of the 19 present IIMs, future of 6 recently established IIMs is still in jeopardy. The facts could be astonishing to note as these IIMs are supposed to have 840 students in all but have a total of only 254 students.

IIMs are considered as the dream B-schools by MBA aspirants but the exact situation is contrary to this myth. In case these IIMs go down with the required minimum percentile score in CAT 2015, they will be compromising with their quality of education. If they do not do it, they fear the risk of not getting the required number and will have to operate well below the sanctioned intake for 2016-18 batch.

MHRD, Government of India, should therefore focus on its policy formation carefully while going ahead establishing the institutes of repute and of national importance which are recognized and known worldwide for their quality.

Stay tuned to MBAUniverse.com for more updates on IIMs