CMAT 2016 Result out: Dip in Scores raise hope of admission for 55084 aspirant

MBAUniverse.com News Desk | :
January 17, 2016
The scores in CMAT 2016 have dipped not only from last exam but also are lower than any of the last 5 tests 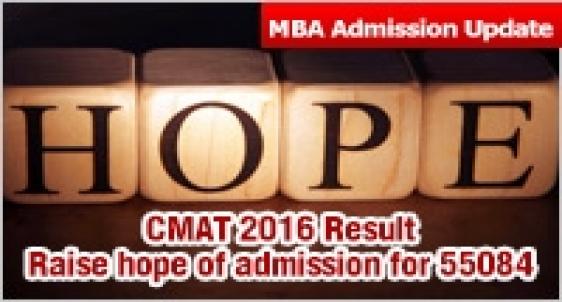 CMAT 2016 result declared by AICTE after 10PM on January 21, 2016 for all the 55084 test takers has been the fastest process in the history of CMAT result declaration. AICTE despite conducting CMAT 2016 as a yearly exam in a single day and in single session on January 17, 2016 in 62 cities across the country declared the result in 5 days.

Displaying the National Merit List for 55084 CMAT 2016 test takers including 623 candidates with negative marks AICTE has confirmed that all the test takers have been ranked and no one has been disqualified.
CMAT 2016 scores show a dip in number of high scorers. This trend of dip the highest and average scores has brightened the chances of admission in good B-schools for low percentilers. The basic reason behind this idea is the low scoring pattern in CMAT 2016 result. The scores in CMAT 2016 have dipped not only from CMAT 2015 but also are lower than any of the last 5 CMAT exams.

There were 57700 candidates who appeared in last year CMAT and had scored between the highest marks 305 to the lowest -70 out of 400.

AICTE-CMAT 2016 contains raw marks along with the arrived percentile score. The percentile is arrived at on the basis of highest marks scored but the sectional scores have also been given due importance in case more candidates have scored same percentile.

Changing Admission Scenario in PGDM B-schools
The admission prospects in good B-schools are expected to brighten up with low scores also. Top B-schools, it appears would reduce minimum required score for shortlisting the candidates for next stage of admission round 2016.

Since the best PGDM B-schools in India accept CMAT score and will offer admission to the high scorers, all the 1504 candidates can be offered admission by these B-schools on the basis of their CMAT 2016 scores. You can explore admission opportunity in following B-schools without further loss of time

Only 18884 between 100 to 200 score: Admission prospects bright
More than 100 good B-schools are expected to have cut off between 100 and 200 marks in CMAT 2016 and would offer admission to 18884 candidates who have scored within this range. Prominent among them are

Admission prospects with 100 and below score
The 34696 candidates who have scored below 100 marks in CMAT 2016 also can find admission in very good B-schools. Many of them also stand in the B-school rankings among top 200 B-schools of India. Admission opportunity can promptly be explored in some of following B-schools

The level of difficulty across all the CMAT exams has more or less remained the same and as such the dip in scores may not be attributed to higher or lower difficulty level in CMAT 2016.

Scoring Criteria
The Scores obtained in CMAT 2016 have been calculated by assigning:
+4 marks for the correct answer
-1 mark for incorrect answer
0 mark for no answer

Percentile Calculation in CMAT
AICTE-CMAT has awarded percentile along with the raw scores in the National Merit List. The calculation criteria is as follows

Percentile has been calculated using the formula:

Merit list
National level merit list of candidates is available on AICTE-CMAT 2016 site home page. Clicking on the National Merit List for the viewing of the result will display the merit list beginning with the scores and percentile of the topper in CMAT 2016 and goes on descending.

The national merit ranking has been arrived based on the Total Score. In case scores are same for more than one candidate, the ranking has been done considering sectional score also in the
order of:

In case more than one candidate secures same ranking as per the above criteria, the same Rank has been assigned to all of them but has been displayed by sorting their names alphabetically.

The Rank of the subsequent candidate has then been extended by the number of additional students having the same Rank. For example if 3 students are at 25th Rank then subsequent student will be ranked as 28th.

AICTE-CMAT one of the 5 important and largest national level MBA/PGDM entrance tests that facilitate admission to various management programmes in 400+ good B schools across the country was conducted in a computer based format on January 17, 2016 as a yearly test. There will be only one CMAT in a year and accordingly the next CMAT is proposed to be conducted in January 2017 for admission session 2017-18.

CMAT 2016: Admit Card out tomorrow on January 9; download from 9AM onwards

CMAT 2016: Sample Test with 18 questions out; get ready for surprises

Stay tuned to MBAUniverse.com for more updates on CMAT 2016