MBAUniverse.com News Desk | :
January 25, 2016
It will be no surprise if the 6 new IIMs shortlist candidates for admission at a much lower CAT 2015 percentile than anticipated as more than 8000 candidates are to be shortlisted 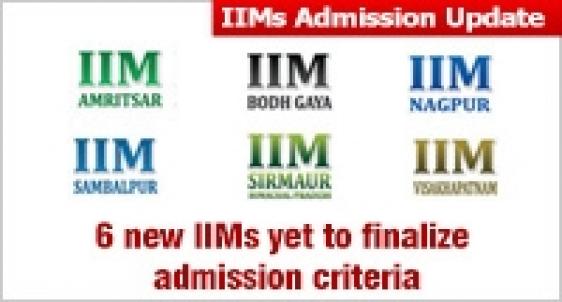 It is advisable to wait for the announcement of shortlist by the new IIMs, if you have scored a percentile of 75 to 80 in CAT 2015

The 6 new IIMs that began operation in 2015 with a proposed intake of 60 students each but could not get sufficient number of students are suffering from the same dilemma of uncertainty this year as 4 out of them are yet to finalize their admission policy although the dates for PI round are coming closer. As such they have neither been able to announce the shortlist nor the shortlisting criteria for admission to PGP 2016-18 batch. It will be no surprise if these 6 new IIMs shortlist candidates for admission at lower CAT 2015 percentile than other IIMs.

In view of experts it is advisable to wait for the announcement of shortlist by the new IIMs, if you have scored a percentile of 75 to 80 in CAT 2015

Clueless on Shortlist and PI
These IIMs namely IIM Amritsar, BodhGaya, Nagpur, Sambalpur, Sirmaur and Visakhapatnam are mentored by top rated older IIMs but are clueless on what ground they would shortlist the candidates and what would be the shape of their PI round, whether they would participate in Common Admission Process (CAP) 2016 or their respective mentor IIMs would conduct PI round for them.

Slashing CAT 2015 percentile requirement? Hope for low scorers
Almost all these 6 new IIMs asked for a high overall CAT percentile for admission in PGP 2015. As a result, number of CAT takers refrained from expressing any interest for admission to these IIMs. As against the intake of 60 in each of these IIMs, they had to be content with fewer candidates.

These 6 newly inaugurated IIMs were not able to get bare minimum 60 students each. Present strength of students for PGP 2015-17 batch in these IIMs as per MHRD record is as follows-

It may not be possible for these IIMs to achieve this number even in PGP 2016-18 batch unless and until they reduce the qualifying CAT 2015 percentile score below 80 and sectional percentile below 75. Accordingly the candidates who have scored between 70 to 75 sectional percentile and 80 overall percentile in CAT 2015 may hope to be shortlisted by these new IIMs. It will offer an opportunity to get into an IIM instead of exploring admission in a lower rung B-school.

If they do not reduce the percentile requirement, these new IIMs run the risk of not getting the required number and will have to operate well below the sanctioned intake for 2016-18 batch.

IIM BodhGaya has also reduced the minimum required overall percentile in CAT 2015 from 96.3 to 90. But it may need to reduce it further as not many takers could be there for IIM Gaya in 2016.
On the same lines, IIM Nagpur, IIM Amritsar, IIM Sambalpur and IIM Visakhapatnam shall have to reduce their minimum qualifying CAT 2015 percentile scores in order to achieve full intake in 2016.

8000 to be shortlisted by new IIMs
MHRD, after a key Cabinet meeting presided by the Prime Minister Mr Narendra Modi on June 24, 2015 announced that all the newest IIMs starting operation in 2015 would have an intake of 140 students each.

But, given the fact that no infrastructure was provided to any of the newest IIMs to accommodate the number and no faculty arrangement from the mentor IIM was available to teach such a large batch of 140 students, the mentor IIMs decided to restrict the batch size within 60 to 70 students for PGP 2015-17 batch.

It will be no surprise that you may find your name figured in the shortlist of these IIMs even after scoring a low percentile in CAT 2015 but had opted for these new IIMs while registering for CAT 2015. The logically drawn conclusion is to wait for the shortlist which is yet to be announced by these IIMs and is expected to be out at a little later date.

Stay tuned to MBAUniverse.com for more updates on new IIMs