IIM Sirmaur: Offers admission without GD/PI; Merit list in May 2016; good chances to get IIM with low CAT 2015 percentile

MBAUniverse.com News Desk | :
January 29, 2016
IIM Sirmaur has announced that the final admission process will not include GD/PI round and the offers for PGP 2016-18 batch will be made only on the basis of CAT 2015 scores and profile of the candidate 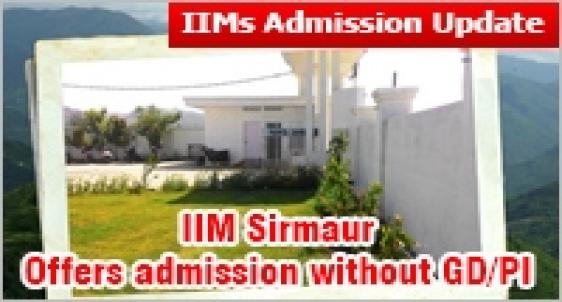 IIM Sirmaur will ask for expression of interest in the first week May 2016, after which merit list will be prepared as per the guidelines stated in the admission policy document

New IIMs are now amending their admission policy for high percentilers in CAT 2015 to get the full intake in their class rooms. In the series IIM Sirmaur mentored by IIML has announced that the final admission process will not include GD/PI round and the offers for PGP 2016-18 batch will be made only on the basis of CAT 2015 scores and profile of the candidate. As per IIM Sirmaur ‘There will be no GD/PI for admission to IIM Sirmaur this year’

Not only the great and aspirant friendly change made by IIM Sirmaur not to conduct GD/PI, the B-school has put its admission process for 2016 on hold and will finalize it sometime in May 2016 when it will be asking the candidates to express their interest for admission.

According to the admission notification released by IIM Sirmaur “IIM Sirmaur will ask for expression of interest in the first week May 2016, after which merit list will be prepared as per the guidelines stated in the admission policy document.”

Admission Criteria down from 96.3 to 80 percentile in CAT 2015
IIM Sirmaur began its operation from August 2015. Admission criteria for the first PGP 2015-17 batch at IIM Sirmaur required 96.3 overall percentile and 80 sectional percentile.

Realizing that, if the qualifying percentile score in CAT 2015 is kept at the past level, the B-school might not attract too many students, the shortlisting criterion based on CAT 2015 percentile for PGP 2016-18 batch has been brought down to 80 overall and 75 sectional percentile.

Wooing more candidates: Intake to increase from 60 to 140
Not many candidates seeking admission in IIM Sirmaur in 2015 bought the admission policy which called for higher CAT percentile than many older IIMs. As a result, against an intake of 60 candidates IIM Sirmaur could find only 22 candidates who finally took admission at IIM Sirmaur. The difference in the factual and envisioned intake of Ministry of Human Resource Development, GoI  at IIM Sirmaur is more than 100 students.

It was approved in the Cabinet meeting on June 24, 2015 that IIM Sirmaur as well as all the other 5 new IIMs would have an increased intake of 140 students in their maiden PGP batch 2015-17 instead of 60 as announced earlier.  But none of them could reach this count of students. On the contrary, IIM Sirmaur is running with about 17% of announced intake. Now MHRD proposes to increase the annual intake of students to 140 this year and later to reach a level of 560 students by the end of 7 years.

For an intake of 140 students, IIM Sirmaur will need to shortlist around 1400 CAT 2015 test takers with a minimum overall percentile of 80 which may further call for the reduction in minimum qualifying scores. Such an increased number of students may or may not express interest for the B-school.

CAT 2015 qualifying score
The changed shortlisting criteria based on CAT 2015 scores to generate the merit list at IIM Sirmaur for admission to PGP 2016-18 batch viz-a-viz the last year’s policy is as shared below.

It should be remembered that CAT 2015 had 3 sections namely VARC; DILR and Quant as against the 2 sections earlier on Quant & DI, and Verbal Ability & LR.

Selection at this stage will be based on the ranks of the candidates computed separately for each category (General/SC/ST/NC-OBC/DAP) on the basis of their Final Scores (FS).

IIM Sirmaur became the 15th IIM close on the heels of 14th IIM Nagpur who were the first to launch their websites with relevant information available in public domain ahead of other new IIMs. IIM Sirmaur is mentored by IIM Lucknow who in the past has successfully mentored two other IIMs – IIM Rohtak and IIM Kashipur.

All activities at IIM Sirmaur will continue to be mentored by IIM Lucknow till it moves to its permanent campus (about 3 years later). During the mentorship period and while IIM Sirmaur's own faculty are recruited, faculty members from IIM Lucknow will be delivering courses at IIM Sirmaur.

The temporary campus of IIM Sirmaur is situated at Himachal Institute of Technology, Near Dental College, Rampur Ghat Road, Paonta Sahib, Distt Sirmaur, H.P – 173025. Poanta Sahib is an industrial town in the south of Sirmaur district. National Highway 72 goes through this town. The river Yamuna passes through the town.

The site for permanent campus of IIM Sirmaur was finalised months back with an appx area of 10000 sq. yards at Daula Kuan in Paonta Sahib Sub Division of Sirmaur District.

Stay tuned to MBAUniverse.com for more updates on IIM Sirmaur