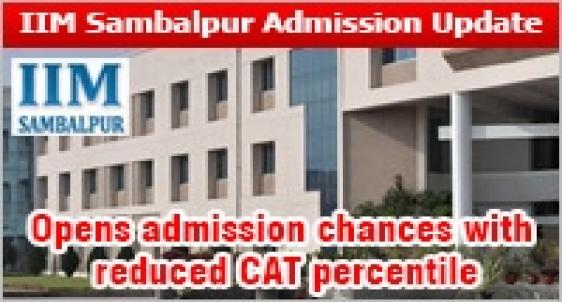 IIM Sambalpur has shortlisted candidates for CAP 2016 with reduced percentile but proposes to award weightage to PAP and WE before offering final admission.

After other new IIMs, it is now the turn of IIM Sambalpur to reduce the CAT 2015 cut off percentile in shortlisting and finalize the admission process for PGP 2016-18 batch going to begin in July 2016 with 60 students.

Other weightage areas
Before generating final merit list and admission offers to the eligible candidates, IIM Sambalpur will consider and award weightage for the candidate’s Past Academic Performance (PAP), Work Experience (WE), and performance in CAT 2015.

IIM Sambalpur: Expectation from you in CAP 2016
CAP 2016 will consist of Written Ability Test (WAT) of short duration say 20 to 30 minutes followed by Personal Interview (PI). You are supposed to write a short essay of 300-400 words on the topic that will be given to you at the spot. After completion of WAT you will face personal interview round which may have 2 to 3 panelists who will ask questions on anything including on what you have written in WAT.

After the CAP round IIM Kashipur will prepare the merit list based on CAP 2016 scores and will provided it to IIM Sambalpur who will further make the final admission offers according to its admission criteria.

Common Admission Process 2016 is the WAT and PI round for the shortlisted candidates of 9 IIMs namely IIM Kashipur/IIM Raipur/IIM Ranchi/IIM Rohtak/ IIM Tiruchirappalli/IIM Udaipur/IIM BodhGaya/IIM Sambalpur/IIM Amritsar. Earlier there used to be 6 IIMs who used to participate in CAP round but 3 more IIMs have been added to CAP round in 2016.

Common Admission process has already started on February 15, 2016 and will be over on March 4, 2016 at 5 different centers namely New Delhi, Mumbai, Kolkata, Bangalore and Chennai.

It may be noted that out of 12 new and the newest IIMs, 9 will offer admission on the basis of scores obtained in CAP round and their respective admission criteria. Among the rest 3 IIMs, while IIM Sirmaur and IIM Nagpur do not propose to go for GD-PI-WAT process to prepare final merit list for PGP 2016-18 admission, the admission policy for IIM Visakhapatnam is yet to be announced.

After the declaration of admission and selection process by IIM Sambalpur, this new IIM also proposes to follow the same criteria as adopted by IIM Kashipur, IIM Ranchi, IIM Raipur, IIM Trichy, IIM Udaipur, IIM BodhGaya while IIM Rohtak has different criteria and IIM Amritsar is yet to announce its admission policy.

Since the newest IIMs propose to ask for the confirmation of interest by the candidates, the process of generating final admission offers may not begin before April 2016.

IIM Sambalpur: Key facts
-IIM Sambalpur in Odisha is one of the 6 newest IIMs that started operating with the first batch in 2015

-IIM Sambalpur is operating from the transit campus at Silicon Institute of Technology, Sason Sambalpur. The permanent campus is being constructed at Basantpur in Burla in Sambalpur.