IIM WAT 2016: Don't be in a hurry; be balanced while writing on controversial topics; know how to approach

MBAUniverse.com News Desk | :
March 7, 2016
IIMs have the history of placing controversial and most debatable topics on burning issues in the WAT year after year to assess how coherently you can write with clarity of thought 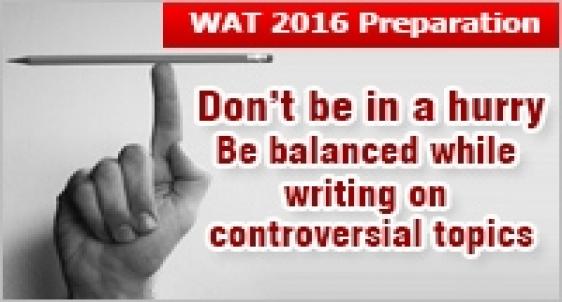 IIMs have the history of placing controversial and most debatable topics on burning issues in the Written Ability Test (WAT) year after year to assess how coherently you pen down your string of thoughts on the topic avoiding general approach and hit the core theme. The same is happening in WAT 2016 going on in almost all the IIMs and is proposed to be over in the month of March 2016. Not much time is therefore left to groom your writing style and content on controversial topics for WAT 2016. The WAT 2016 process is going on in 16 of 19 Old and new IIMs and rest 3 propose to offer admission without conducting any PI round.

Don’t begin immediately
According to Prof S K Agarwal, expert on PI-WAT preparation post CAT 2015 exam, you must not be in a hurry to write immediately after getting the WAT topic without gathering your thoughts.

Before beginning to write spend a minute to think on what you propose to write and how you should begin on the controversial topic. Since controversial topics are on sensitive issues you are supposed to maintain your balance in writing on such topics in the WAT 2016. All this has to be done in the time duration of 20 to 25 minutes allowed for WAT by the respective IIM. You are expected to write a good piece of 300 to 400 words during the allotted short time. If you are too inclined to either side of such topic, you shall have to be ready to face the volley of questions based on your writing ability test in your PI round on being biased.

Hot WAT topics creating controversy
The controversial topics may relate to the national or global issues and events marking negative/positive impact on our everyday life.

It is better to understand the strategy while getting prepared to write an essay on controversial topics like – Environment negligence by developed countries; Spread ofterrorism;Growing population in Developing countries- an asset or liability; Nuclear weapons; Subsidy elimination among others. The topics in themselves are on the emerging issues across the globe at the moment. The problems faced by the aspirants while dealing with these types of essays are their thoughtful outline and proper arrangement within the given time frame.

Information source & Writing approach
Since a lot of information on such topics is available in newspapers, books and they are the running hot topics as number of countries are affected by such problems, many versions and views on the issues are regularly presented in the media with penetrating as well as fierce arguments from all sections of people, the confusion and indulgence in the controversy is but natural. The fog has to be cleared and you must write bringing the theme out of the dilemma with clarity of thought keeping yourself away from the controversy.

Develop full string
Begin with a narrative and informative tone on the topic and some aspects of it. The beginning paragraph must be an indication how clearly you have understood the topic and then give a best shot in writing of the same.

The string of paragraphs must be coherent depicting the types, causes, thoughts, views on the topic. Since the entire matter is controversial, for example – “The views upon terrorism and religious terrorism are viewed as victories and exultation in the eyes of the people who are supportive of the religions and who advocate such acts” or the “Elimination of subsidies in the country – beneficial or harmful. The compelling circumstances of economy, who in fact are the beneficiaries, whether the loss is more than the benefits accrued and how to get rid of the same”. Now you can be informative of emergence of the thought and where does it lead to, its impact on the society and economy. Do not take your own stand without grasping the gravity of the topic.

Avoid hurting sentiments
You must be careful while putting down your thoughts so as not to hurt the sentiments of any strata of the society. Put down your thoughts in an organized manner.  The essay is to have justified views on the major world threats and problems. So the essay should not be biased towards a particular segment of people. You have no right to invade people’s thoughts and views and provide your own judgments in that.

Support with facts & quotes
The essay on any controversial topic as above, further should carry views from moderate to authoritative people. Be careful while directly putting the thoughts in your essay.  Consider the material gathered in your mind and apply your critical thinking to it. Apply the judgments and arrive to concrete facts.

Better to conclude with positive thought
The concluding part of the WAT should summarize with positive thoughts carrying a message to the audience (In this case the panelists) how to fight the problem out and have a happy and safe future. Your WAT essay might prove an inspiration for your reader, who happens to be your examiner also, as well as to the society.

WAT is an important part of PI round in admission 2016 in all the IIMs and top rated B-schools. You get a weightage of 10 to 20% on the basis of the Written Ability Test (WAT) when final admission offer is generated by IIMs. It is advisable not to take the WAT process lightly. Groom yourself to the expected level of IIMs. It needs good writing and a good writing practice. You can gather material from printed and digital source but do not take short-cuts in writing practice. Write in full length and then analyse where you have lacked so that you may improve in next few days.

Stay tuned to MBAUniverse.com for more updates on IIM WAT 2016