MBAUniverse.com News Desk | :
March 14, 2016
FMS Delhi is known for its great learning experience and high ROI which make it a preferred MBA destination to IIMs and other top B-schools 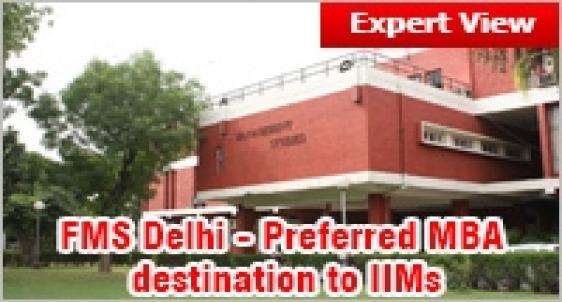 One of the early proponents of a formal degree of Master of Business Administration in the country, FMS over the years has produced very successful business leaders, management thinkers and wealth creators Dr M L Singla, Dean FMS Delhi

Offering MBA education with a difference, Faculty of Management Studies, University of Delhi is known for its great learning experience and high Return on Investment in MBA education. No doubt learning experience in IIMs is also one of the best but it comes with a high price tag while the placement in FMS is compatible to even the top rated IIMs. The academic programmes, training programmes, research and consultancy offered at FMS are no less recognized as that of IIM A, B, C or L, but its flagship Programme is its 2 year full time MBA which students prefer to join and if offered admission in it sacrifice their seat in IIM.

If you want to do your MBA from a Top leading Premier B School without burning a hole in your pocket, FMS Delhi is the ideal option. This is no joke because no other top rated B School in India charges fees as low as Rs.25000 for 2 year MBA programme. If you get into an IIM you will have to shell out not less than Rs.20 lakhs for 2 years and even for private PGDM colleges the amount could be a little less like Rs.10 or 15 lakhs.

Legacy spread alumni base
FMS Delhi was established even before any IIM came into existence. Since 1954, as one of the top management institutes in India, FMS has developed distinct brand equity. The learners here challenge assumptions, think beyond visible limits, and add the value of excellence in whatever they do. It was established under the aegis of the University of Delhi. It is situated in the heart of North Campus neighboring some of best colleges and departments of the university.

FMS Delhi aims to deliver management education with a difference, ensuring that learning of theory and concepts synthesizes with fieldwork, case studies and instrumental feedback.

The last 50 years has seen FMS creating managers, who have within themselves the mettle to take on the challenges of the future. With the ability and skill set required to drive key initiatives within organizations, they are men and women of leadership and integrity, who are bringing about a difference in business organizations, communities and institutions all over the globe.

FMS: Computer Centre
FMS has one of the most modern, state-of-the-art computer centers with over 100 computer systems (Intel Dual Core and AMD Athlon) at its north campus. Along with this computers are available in the library, class rooms and lecture theaters also.

Library
FMS has its main library at North Campus of the University. It has air-conditioned reading rooms housing over 50,000 books and over a 100 Journals (including 60 foreign journals).

The high ROI B-school: Low fee-high placement
With a meagre fee of Rs.25000/- charged for 2 year MBA programme, FMS Delhi is the only highly ranked B-school in India that has 100% and high placement record throughout.

Beating all the odds, FMS Delhi placement has achieved new heights in placement season 2016. Its student has grabbed Rs.1.05 crore international package while the highest domestic salary offered in placement 2016 also shot up to Rs.66 lakhs. Average compensation in placement 2016 at FMS Delhi has also gone up to Rs.20.5 lakhs. The B-school has witnessed consistently higher salary offers from recruiters even during the slow down period.

Going by the data, it can be well understood that even at the top rated IIM Ahmedabad, one has to shell out a fortune to get a placement package which can be procured at FMS Delhi by spending a few thousand rupees. The difference in ROI is so huge that it will take not less than a year or so to earn what you have spent at IIM Ahmedabad but at FMS Delhi in the very first month of your placement you will earn not less than 100 times of what you have spent for the tuition fee for full 2 years, if we go by the average placement.

Easier to get into FMS than into IIMA, B, C
FMS and IIMs follow similar process for admission to their flagship 2 year MBA or PGP programmes. Both shortlist the candidates on the basis of CAT scores but while IIMs get too rigid on their sectional percentile cut offs, FMS used to consider the overall CAT percentile till MBA admission 2015. From MBA 2016-18, FMS has decided to award weightage to sectional scores. However, the B-school is not so rigid and has provided some leverage points also to improve academic and gender diversity in its class rooms. FMS Delhi has already declared that it would shortlist not less than 10 times of candidates for final admission round comprising extempore and personal interview.

An aspirant with a high percentile of 98 and above in CAT 2015 with a balanced sectional score can expect to be shortlisted by FMS Delhi although FMS has not declared what minimum sectional percentile will be required by it, the award of weightage to different sections could change the scenario and the candidate not expecting to be shortlisted may get pleasant surprise when he/she finds his/her name among the shortlisted candidates.

This is despite the fact that all the older IIMs namely Ahmedabad, Calcutta, Bangalore, Lucknow, Indore, Kozhikode and Shillong and all the 6 new IIMs declared the shortlist very much in the month of January/ February 2016 after declaration of CAT 2015 result. These B schools are on the verge of completing their admission process and will shortly offer admission letters to their prospective students for the batch 2016-18.
Not only this XLRI, SPJIMR, MDI and many other highly ranked B schools have almost completed their admission process. On the other hand, FMS Delhi is taking time to declare the short list which may not be out before the end of March 2016. However, FMS is still able to begin and end its academic session on time.

Speaking about the USPs and vision of FMS Delhi towards MBA education, Dr. M L Singla Dean, FMS shared with MBAUniverse.com “For more than half a century, Faculty of Management Studies, part of University of Delhi, or simply FMS Delhi, has been playing a seminal role in the growth of corporate sector and management education in India. One of the early proponents of a formal degree of Master of Business Administration in the country, FMS over the years has produced very successful business leaders, management thinkers and wealth creators.”

Dr Singla further adds “Today FMS has consistently ranked among one of the Top 5 B-Schools of the country for the last 2 decades or so. As a matter of fact, it is the Top University Based B-School in the country. Given the meager infrastructure that University department work from, this is no small a feat. Our alumni, faculty and students have done wonderfully well in terms of performance to resources ratio. Many a times, I have heard that FMS is the highest ROI B-School not only in India, possibly in the world.”